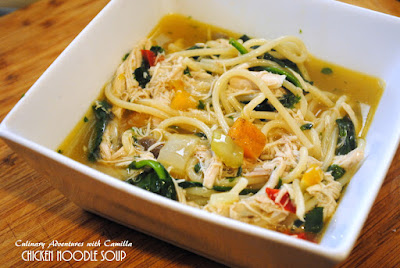 I still don't really know why chicken noodle soup can make you feel better when you're feeling crummy. But it does, doesn't it? I had a fever last night and was still reeling today. So, I whipped up a pot of chicken noodle soup and it was awesome. It does take a little bit of time. But, when you're languishing on the couch, you can manage this. I promise. 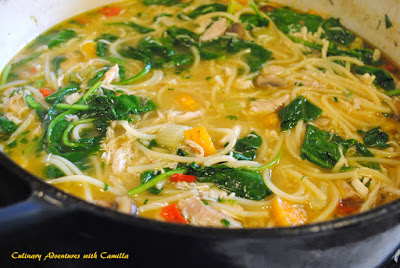 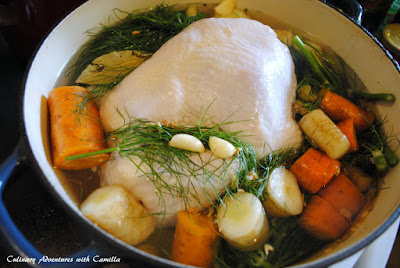 Place all of the broth ingredients in  large pot. Fill the pot with water and bring to a boil. Cover and reduce to a simmer. Hold at a simmer for 90 minutes. Strain out the solids and reserve the broth. Once the chicken is cool enough to handle, pull off the meat. You can reserve the bones to make a second stock.

In the same pot, heat a splash of olive oil. Cook the carrots, celery, garlic, and red bell peppers until softened. Add in the chicken and mushrooms. Pour in the chicken broth and more water, if needed. bring to a boil. Add the noodles and cook as directed. Stir in the spinach until just wilted. Season with salt and pepper to taste. Fold in herbs. Serve hot...and feel better soon!