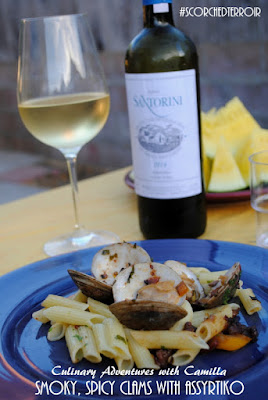 You'll be seeing several posts in the coming week as I prepare for the #ScorchedTerroir event for September's #winePW. Here's my invitation. I couldn't decide on a single wine, so I'll be sharing wines from around the blog. Let's start on Greek island of Santorini. 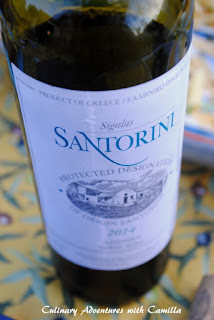 I've always wanted to visit Santorini. Those whitewashed, cubist houses overlooking the turquoise Aegean and beaches comprised of black, red and white lava pebbles...looks like bliss. Until I get over there, I'll try one of their wines, close my eyes, and pretend that I'm there!

Santorini is what remains after an enormous volcanic eruption destroyed the island; it's largely a water-filled caldera and the most active volcanic center in the South Aegean Volcanic Arc.


The island was the site of the Thera eruption which some people claim is the source of the legend of Atlantis. In any case, during the Thera eruption, a large caldera formed that was surrounded by volcanic ash hundreds of yards deep. That definitely qualifies as scorched terroir, right?

Santorini is one of the few winemaking regions that was never affected by phylloxera, a parasitic vine louse. So the vines have their original root stocks instead of being grafted onto the stocks of more resistant vines.

In the Glass...
I tracked down Domaine Sigalas's Assyrtiko, pronounced A seer' tee ko. Crisp and unoaked, I found the pale gold wine to have intense minerality with distinct aromas of lemon blossom. It was the perfect pairing with some smoky, spicy clams.

Funny story: completely unaware of what I was pouring and why, my husband queried, "Does this seem smoky to you?" I picked my jaw up off the table and asked him to expand on that. After a second sip, he continued, "No, maybe I was imaging it...if you don't taste it. Do you taste the smoke?" I definitely did taste it, but thought it was only a figment of my imagination. But Jake confirmed it: Assyrtiko does have some discernible smokiness along with its sharp acidity. 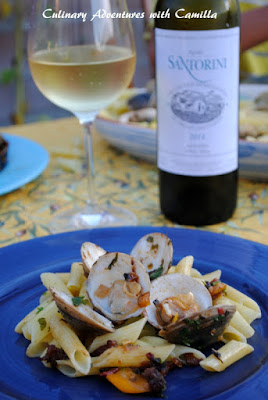 On the Plate...
To go along with our smoky wine, I whipped up a smoky seafood dish that was so tasty, the boys licked their plates. Literally. I was going to tell them that that was not proper etiquette, but I was secretly tickled that they enjoyed the dinner that much. I took a deep breath and mentioned that they shouldn't lick their plates...in public!


Procedure
Cook the pasta and set aside. In a large, flat-bottom pan, cook the bacon in a splash of olive oil until the fat is rendered, but the bacon hasn't crisped. Add in the onions, garlic, and peppers. Cook until softened. Add in the tomatoes. Simmer until a thick sauce has formed. Pour in the wine and add the paprika, pepper flakes, and 1/2 C of the herbs. Season to taste with salt and pepper. Bring back to a simmer and place the clams in the pan. While the clams cook - once they are open, they are done! - spoon the sauce over the top of the shells.

To serve, remove the clams to a separate plate along with a little bit of the sause. Toss the cooked pasta into the remaining sauce. Add a splash of olive oil to make it glisten, then turn the pasta onto a serving platter. Sprinkle with the rest of the herbs and the lemon zest. Place the cooked clams on top of the pasta, top with the reserved sauce, and serve immediately. στην υγειά σας. Cheers!