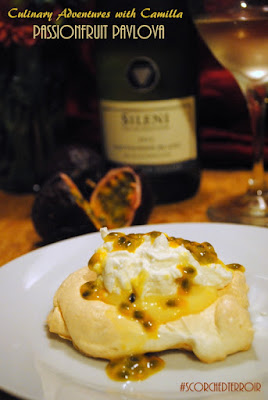 Scorched New Zealand...
I've always wanted to visit New Zealand. Jake and I even considered it for our honeymoon, but we were swayed by a free timeshare from one of my aunts and uncles. So we honeymooned on Kauai and fell in love with that island. We'll make it to New Zealand eventually. 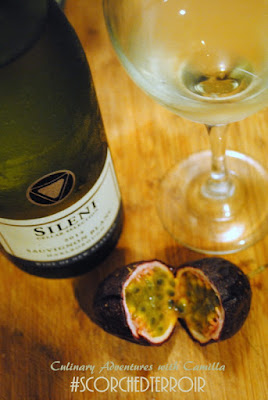 In the Glass...
Sileni's Sauvignon Blanc has an intriging mix of kiwi, passionfruit and pineapple aromas. On the palate, it's fresh with a lingering acidity.

I had initially thought I'd pair this with a savory dish, but was swayed by the taste of the tropics.

On My Plate...
There is dispute as to whether this dish hails from Australia or New Zealand. Recipes for it begins to appear at almost the exact same time in both countries. Food historians agree that the dessert was created in honor of the great Russian ballerina, Anna Pavlova. She toured both Australia and New Zealand in the late 1920s. And, traditionally, it's a sweet meringue crust, filled with whipped cream, and topped with fresh fruits, including kiwis, strawberries, and other berries. I opted to make a pavlova topped with a passionfruit curd, whipped cream, and a spoonful of fresh passionfruit pulp. 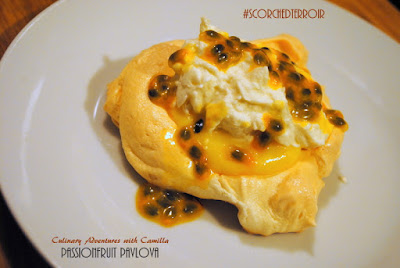 Procedure
Preheat the oven to 350°F. Combine egg whites, salt, and white vinegar together in a large mixing bowl and beat on high speed until soft peaks form. Combine the sugar and cornstarch together in a small bowl and add to the egg whites in thirds, whisking each addition in completely. Beat until stiff peaks form. 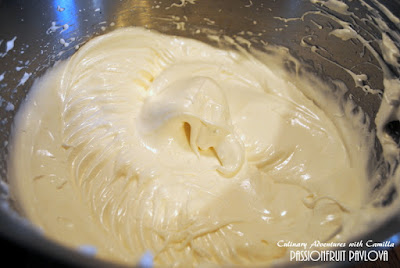 Line a baking sheet with parchment paper and spoon the meringue into 12 big spoonfuls, using a spoon to spread them in a circle. 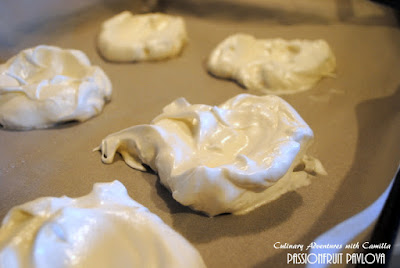 Bake for 10 minutes, lower the heat to 200°F, and bake for another hour. Turn off the heat and cool the meringues in the oven with the door propped open.

To assemble, lay your meringue on your serving plate and smear with curd. Place a dollop of whipped cream on top the curd. Top with a spoonful of fresh passionfruit pulp. Serve immediately.