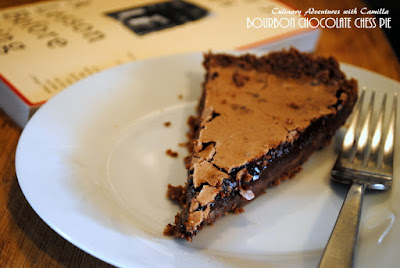 Here we are at month three in #thebookclubcookbookCC, a year-long journey to explore - and cook from - The Book Club Cookbook, Revised Edition: Recipes and Food for Thought from Your Book Club's Favorite Books and Authors by Judy Gelman and Vicki Levy Krupp.* Judy, Vicki, and their publisher, Tarcher-Penguin, have provided the hosting bloggers with copies of the book plus copies to giveaway each month of the project. Woohoo. Incredibly generous.

This month Renee at Tortillas and Honey has selected A Lesson Before Dying by Ernest J. Gaines.** Click to read her invitation: here. The recipe Judy and Vicki shared for the cookbook selection is tea cakes, but other Southern morsels, such as pralines - pronounced prah-leens - were mentioned, too. In fact, in her invitation, Renee shared a recipe for Chocolate Cake with Praline Topping. I had initially planned to make some bourbon pecan pralines, but The Enthusiastic Kitchen Elf wanted to make a chocolate chess pie from Sean Brock's cookbook. I figured that as Brock is a good ol' Southern boy, this would work just fine!

I will share the recipe for the bourbon pecan pralines soon, though, because they were fabulously rich and delicious. Later...

On the Page...
"I would just as soon put a hog in the electric chair as this." Hog. The defense attorney's characterization of accused murderer as a hog torments the woman who raised Jefferson. Miss Emma complains to Grant Wiggins, the local school teacher and narrator of the book. "I don't want them to kill no hog," she said, "I want a man to go to that chair, on his own two feet."

Over the course of the book, Wiggins visits Jefferson in jail. They talk, they - eventually - eat together, and, in the end [spoiler alert!] Jefferson was "the strongest man there." Wiggins hears the reports after the execution, "...[Jefferson] looked at the preacher and said, 'Tell Nannan I walked.' And straight he walked, Grant Wiggins. Straight he walked. I'm a witness. Straight he walked."

As I read this book, I kept asking myself, "Am I enjoying this?" It's not really novel to be devoured and enjoyed, I decided. It's a moving novel that speaks to the act of letting go. It's about resignation with dignity, heart, and love. And it's haunting. 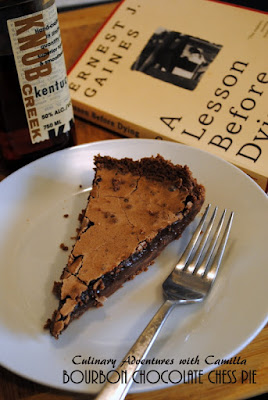 Why is is called 'Chess Pie', Mommy? asked the Precise Kitchen Elf. I don't like playing chess. Do I have to play chess if I have a piece of pie?!


I did some reading, in search of an explanation, and didn't come up with a definitive answer for the PKE. As far as I can tell, no one knows how chess pie came about its name, but the several explanations make for great table conversation. One explanation asserts that Southern gents were served this pie as they retreated to a room to play chess; another explanation purports that the name comes from a Southerner's drawl - "It’s jes’ pie" (you know, what we would say  as 'it’s just pie'). And another explanation suggests that the pie is so high in sugar that it kept well in pie chests and was called “chest pie.” But, no, I assured him, you don't have to play chess to get a piece of pie.

The Enthusiastic Kitchen Elf didn't seem as bothered how the pie was named. He gamely pulled down the kitchen scale to weigh out the chocolate pieces. 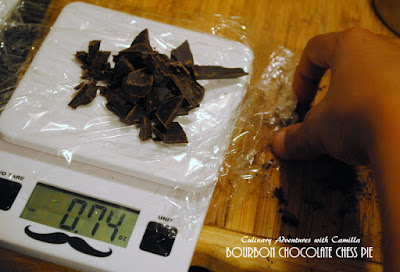 Bourbon Chocolate Chess Pie
slightly adapted from Chef Sean Brock's Chocolate Chess Pie
I used my own recipe for the crust and made it gluten-free for Jake; the Enthusiastic Kitchen Elf mis-read Chef Brock's 'Bourbon Barrel Foods Aged Vanilla Extract' as 'bourbon' so ours has booze and no vanilla!

For the Crust
For the Filling

Procedure
For the Crust
Mix the flour, sugar, and unsweetened cocoa powder. Rub in the butter with olive oil until the mixture resembles coarse breadcrumbs. Stir in 1 T water and 1 t bourbon with a fork until the mixture forms a ball. Roll out between two pieces of parchment paper. Press gently into a tart pan. Preheat oven to 350 degrees F. Stick tart pan in the freezer while the oven heats. Bake for 25-30 minutes at 350, or until lightly firm.

Combine the sugar, cocoa powder, and salt in a large mixing bowl. Whisk in the milk, then whisk in the eggs and bourbon. Fold in the melted chocolate-butter mixture. Pour the filling into the pre-baked chocolate crust.

Bake the pie until the filling is set and no longer jiggles in the center, approximately 40 to 45 minutes. Let the pie cool to room temperature on a wire rack, then refrigerate it for at least 2 hours before slicing. Serve at room temperature. 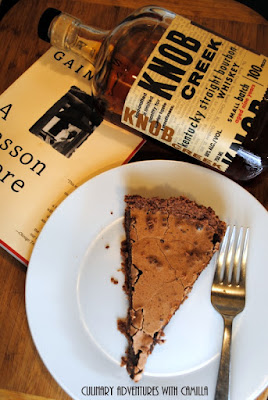 This month Renee at Tortillas and Honey, this month's host, is giving away a copy of the book.* Enter to win a copy of the cookbook so you can join us in future months, if you wish!

One of our lucky readers - US and Canada only! - can enter to win a copy ofThe Book Club Cookbook, Revised Edition: Recipes and Food for Thought from Your Book Club's Favorite Books and Authors by Judy Gelman and Vicki Levy Krupp, courtesy of Tarcher-Penguin. Giveaway runs from September 1st till September 30th at 6 o'clock PM, Pacific time. Please see terms and conditions in the rafflecopter widget below. Many thanks to Tarcher Books. You may find Tarcher: on the web, on Facebook, on Twitter, and on Pinterest.

a Rafflecopter giveaway
*Disclosure: Renee received a complimentary copy of The Book Club Cookbook, Revised Edition: Recipes and Food for Thought from Your Book Club's Favorite Books and Authors by Judy Gelman and Vicki Levy Krupp to use in this year-long project plus the opportunity to give a copy away. Opinions are our own. We received no further compensation for our posts.

**I've included an affiliate link below for this month's selection...if you would like to read it...as well as a product I used in this recipe. If you choose to purchase this way, I do receive a small portion of the sale. If you are uncomfortable using the links, feel free to go to amazon and search on your own!