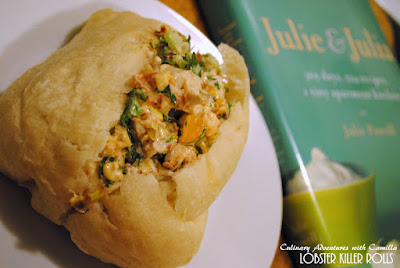 Food'N'Flix turns five this month! Happy birthday!! Five years ago this month, Heather of All Roads Lead to the Kitchen launched this fun project. I doubt she anticipated that it would blossom into a fantastic five years full of movies, food, drink, new friends, and inspiration! We all watch the chosen movie, then head to the kitchen to make sometime inspired by the click. To date, 60 movies have sent us into the kitchen to create an inspired dish and related blog post! Sixty. I haven't participated in all of them, but I've made a dent in my foodie-flick list because of this group.

This month, we are not watching any single movie, we are watching and cooking ANY of these. Click to see Heather's invitation...you still have time to join the fun.

I thought I would watch a movie that I had missed, but then I saw Julie & Julia, the book, sitting on my nightstand. This summer the boys were with my parents a lot and together they discovered these little neighborhood mailbox libraries all over the peninsula. You can drop off books, swap books, or just take a book with the understanding that you will bring one back next time. What a great idea! The boys came home with the book for me after one of their outings. "Mommy, we thought you would love this book." So, I read it and rewatched the movie this month for Food'N'Flix.

On the Screen...
Back in November of 2012, we watched Julie & Julia* and I made Sole Meunière and Concombre au Beurre. This time around, I was inspired by this comical scene...


On the Plate...
I decided on Lobster Killer Rolls. Or Killer Lobster Rolls... because these are amazing. The magic of this comes down to layers—layers of texture and taste. It's the marriage of the succulent lobster meat, the creamy sauce, the sweet of the caramelized leeks, the saltiness of the capers, and the crunch of celery. 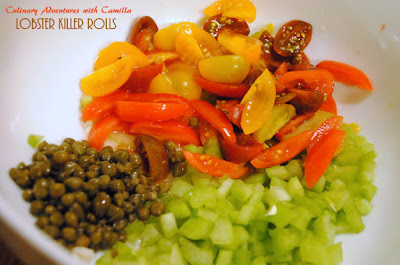 But, before I get to the recipe, I do want to share a surprising fun fact about lobster. During colonial times, lobsters were seen as “poverty food.” In fact, there were so many lobsters that Native Americans used them as fertilizer and bait for fishing. With their reputation as a cheap, abundant food source, lobsters were served to children, indentured servants and prisoners. In Massachusetts, some indentured servants rebelled and had it specified in their contracts that they would eat lobster no more than three times a week. Haha. If only we could be so lucky! 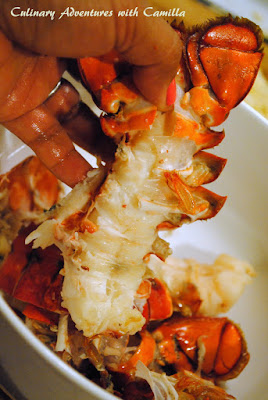 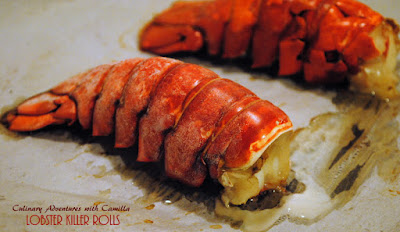 Procedure
Roast the Lobster: Preheat oven to 350 degrees F. Place lobster tails on a parchment-lined baking sheet. Brush each lobster tail with olive oil, and roast for approximately 16 to 18 minutes. If you prefer to use a thermometer, cook till the internal temperature reaches between 140 and 145 degrees F. or until an instant-read meat thermometer register and internal temperature of 140 to 145 degrees F. When they are cooked, the lobster will be that characteristic orange-red color. 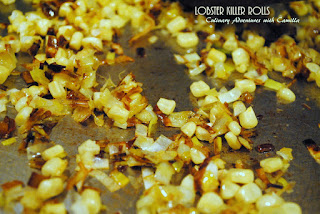 Carmelize the Leeks: In a large, flat-bottom pan, heat a splash of olive oil and 1 T butter. Place your leeks in the pan and sprinkle with freshly ground salt and freshly ground pepper. Cook the onions over medium-low heat. Caramelizing the leeks can take anywhere from 10 minutes to 30 minutes, depending on your preferred level of caramelization. As long as you cook them slowly and stir them frequently, they won't burn. When the leeks are getting close to how dark you want them - anywhere from a pale honey to a deep amber - stir in the raw corn kernel and let them cook slightly.

Make the Filling: Pull the lobster meat from the tails and chop them into large chunks. Place all of the ingredients - lobster chunks, caramelized leeks and corn, tomatoes, celery, capers, parsley, mayonnaise, hot sauce, vinegar, and smoked paprika - in a large mixing bowl. Season to taste with salt and pepper. Cover and chill in the refrigerator for at least 30 minutes. 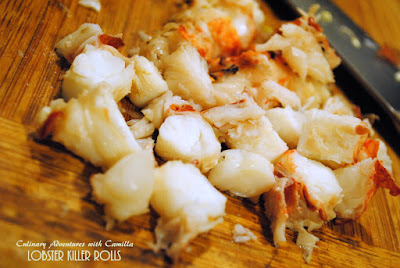 To Assemble: Slice the rolls lengthwise. I preferred to cut them down the top so that they are more like a bread bowl than a sandwich. Place them in the oven to toast slightly. Stuff each roll with chilled lobster salad. Serve immediately. 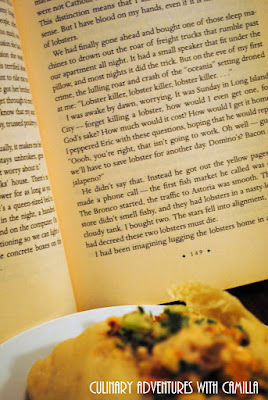 *I've included affiliate links below for this month's movie selection and the book...if you would like either. If you choose to purchase this way, I do receive a small portion of the sale. If you are uncomfortable using the links, feel free to go to amazon and search on your own!