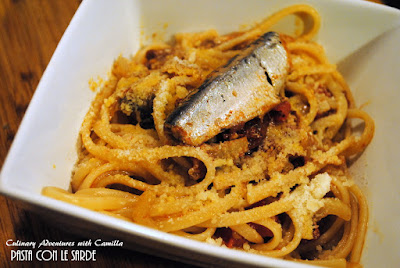 This is my final post as I prepare for the #ScorchedTerroir event for September's #winePW. Here's my invitation. I couldn't decide on a single wine, so I'll be sharing wines from around the blog. My final wine of the virtual globe-trotting is from Sicily.

Scorched Sicily...
Unlike Santorini and New Zealand, I have actually been to Sicily. More than once. I love it and its surrounding islands! When I lived in Rome for a year, after college, I took a week long trip through Sicily and ended up on Lìpari, the largest in a chain of islands in a volcanic archipelago situated in between Vesuvius and Etna. I rented a cottage on a family's farm in Lìpari and was able to see them putting up a tomato harvest for the year. Truly amazing. Then, a few years later, I returned to Sicily with my husband and some friends and family. We stayed in Palermo then were stranded on Ustica, an island off the northwest coast, for a week. I write 'stranded' because we had only planned to be there for two days; but storms came in and no boats were returning to Palermo. That was one of my favorite travel delays. We had rented a house from a man named Antonio who left us fresh herbs and fresh eggs during our stay. He also sent us off with some salt-cured capers. Before that, I had never seen capers growing in the wild. 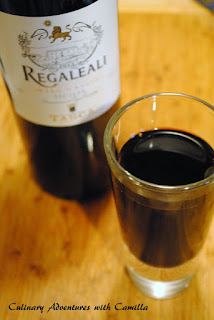 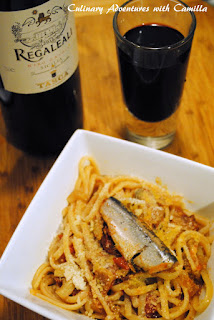 In My Glass...
Sicily is home to the Tasca d’Almerita family of vineyards - Regaleali, Capofaro, and Whitaker. The Regaleali estate is the heart of the family’s wine production; the Capofaro estate is on Salina which is one of Lìpari's neighbors; and the Whitaker estate consists of vineyards originally planted by a British family during the 19th century.

While the history of Tasca d’Almerita dates back to the 1800s, it was Count Giuseppe Tasca who reinvigorated his Sicilian wine business in the late 1950s. I picked a red wine from the Regaleali vineyard. With almost an inkiness to the reddish hue, this wine had layered notes of cherry and raspberry. On the palate, those ripe red fruits were framed with a silky suppleness. It was both complex and light. 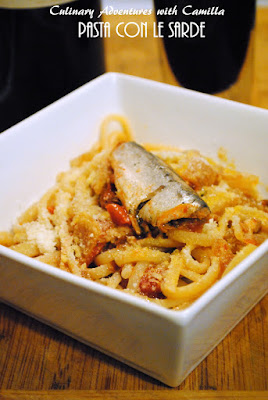 In My Bowl...
One of my favorite things about Sicily: the seafood. When we stayed in Palermo, I hauled the family to the market to get fresh seafood for dinner. We ate fish, sea snails, and whatever else caught my eye. When we were on Ustica, fisherman rolled carts through the cobblestone streets, bellowing, "Pesci! Pesci!" I remember sending my cousin down to the street to stop one of the fisherman when I saw swordfish on the cart.

This dish - pasta con le sarde - is also called pasta che sardi in a local dialect. It's typically made between March and September when the fresh sardines are readily available in the markets and the wild fennel is abundant.  I ended up with canned sardines and subbed in fennel and fennel pollen. Also, this is a non-traditional version; I don't like the sweetened breadcrumbs on top of mine.

Procedure
In a large, flat-bottom pan, heat olive oil and saute fennel and onion until the fennel is softened and beginning to caramelize. Stir in the anchovy fillets, tomatoes, saffron, and saffron-soaking water. Bring to a boil, then reduce heat to a simmer. Cook till the tomatoes are completely broken down and a thick sauce has formed. In the meantime, cook your pasta.

Once the pasta is cooked and the sauce is done, toss the pasta into the sauce with a splash of olive oil to make it glossy. To serve, place pasta in individual serving bowls, top with sardines. Grind salt and pepper over the top. Sprinkle with grated parmesan cheese. Add a pinch of fennel pollen to the top. Serve immediately.

*I've included an affiliate link below for fennel pollen as some people are unfamiliar with this culinary pixie dust. If you choose to purchase this way, I do receive a small portion of the sale. If you are uncomfortable using the link, feel free to go to amazon and search on your own!