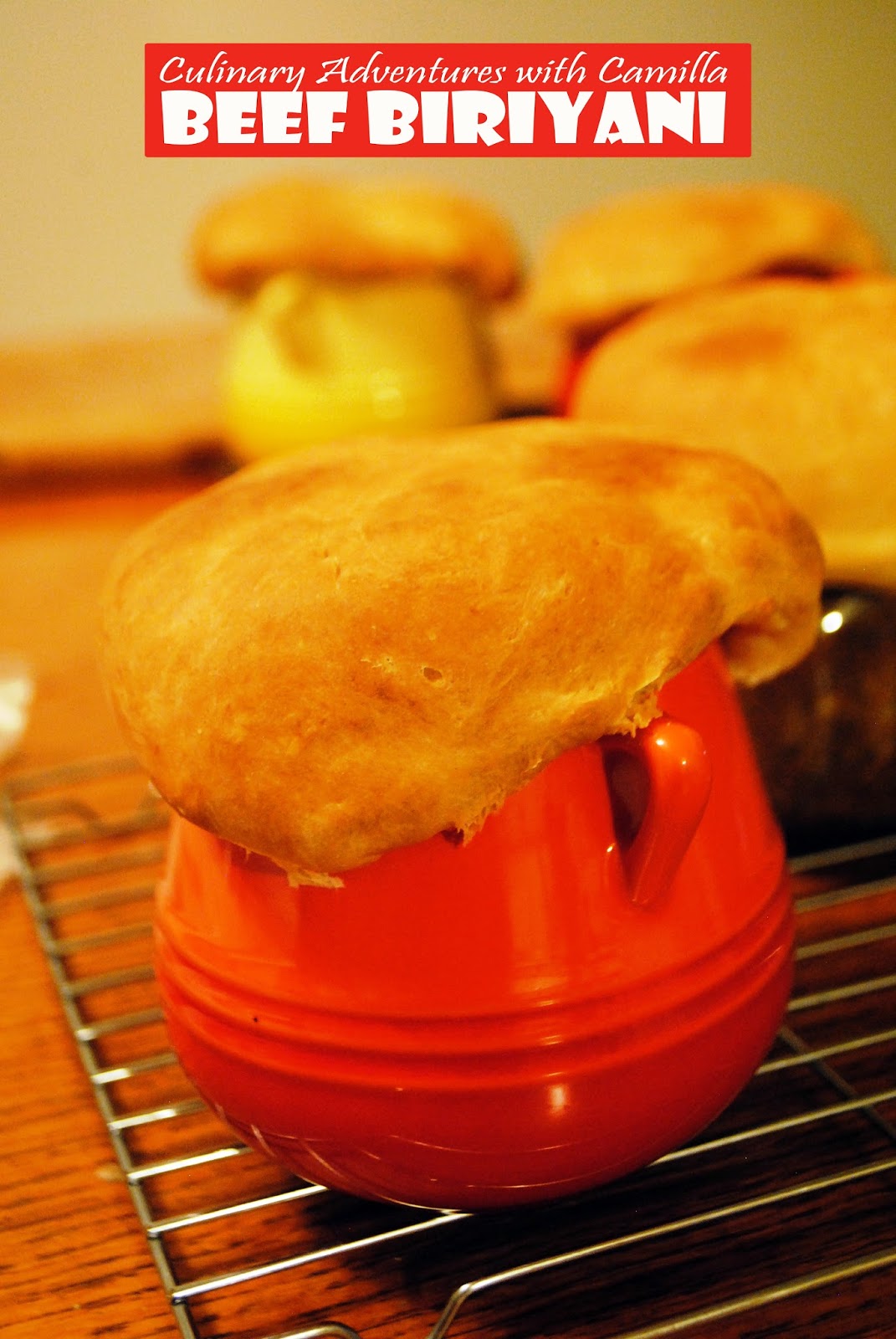 When the Enthusiastic Kitchen Elf and I were watching an episode from the second season of Mind of a Chef, we watched Chef April Bloomfield make lamb biriyani with Chef Stevie Parle. Here's a link to the Venison Biriyani on his website. We loved the presentation and decided to create our own version with a few minor changes: lamb is not a favorite with the boys just yet, so D swapped in beef; and rosewater is not a favorite with Jake, so we didn't rub his naan with any. Oh, and I don't have a biriyani pot; I used some mini bean pots from Le Creuset. Also I didn't have any edible gold leaf, so we swapped it out for edible silver glitter hearts.*

A heartfelt thank you to Kitchen IQ who was an event sponsor for a recent online blogging event I coordinated.** I mentioned that my son tried to abscond with my spice grater that they had sent. So, they sent him one of his very own! He used the grater on the nutmeg and cinnamon in this recipe. 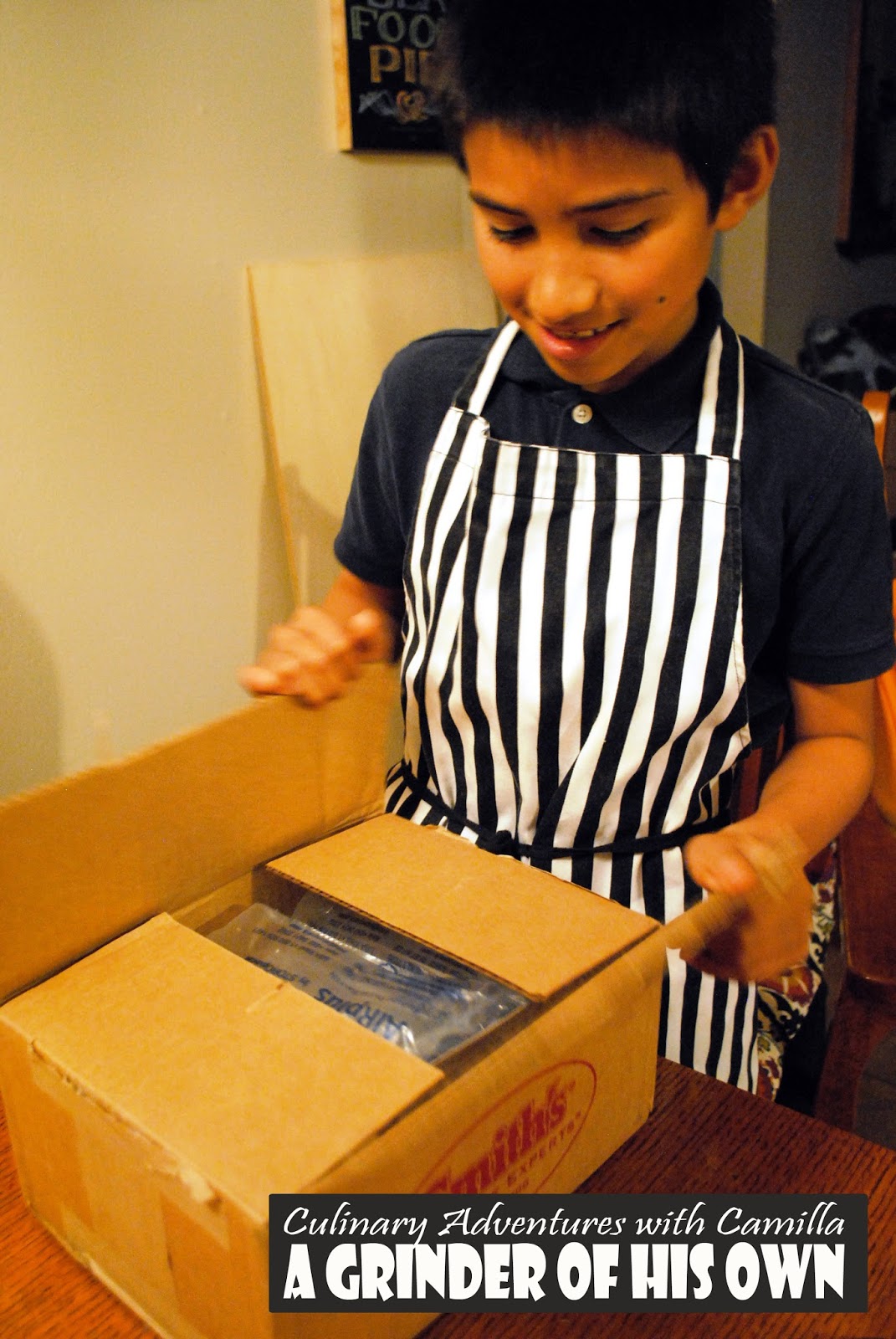 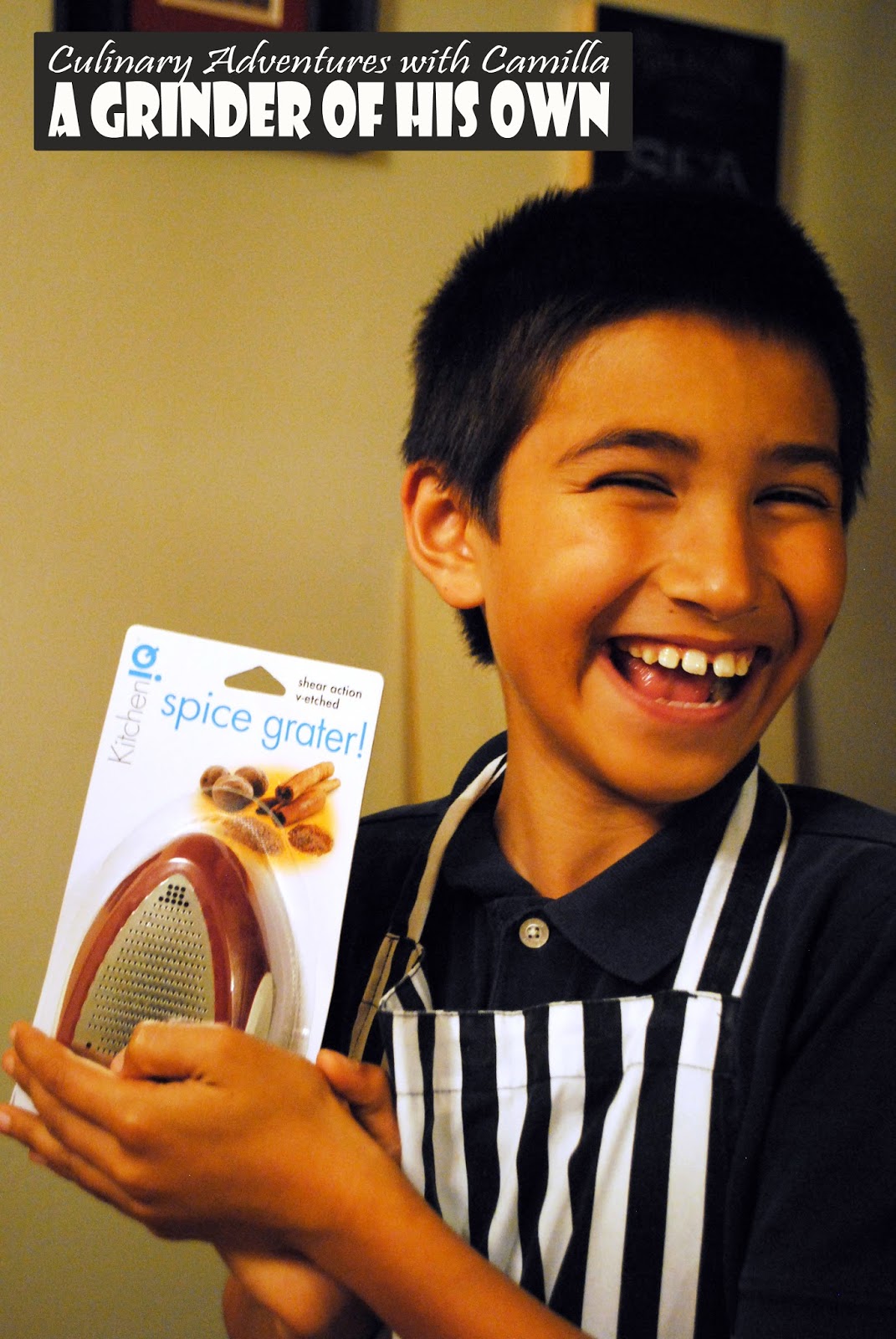 Quick Note: This recipe was made over a period of two evenings. On the first, we seasoned the meat and made the curry which cooked for over three hours. On the second, we assembled the pots, baked, and enjoyed. This is well worth the efforts, I promise! 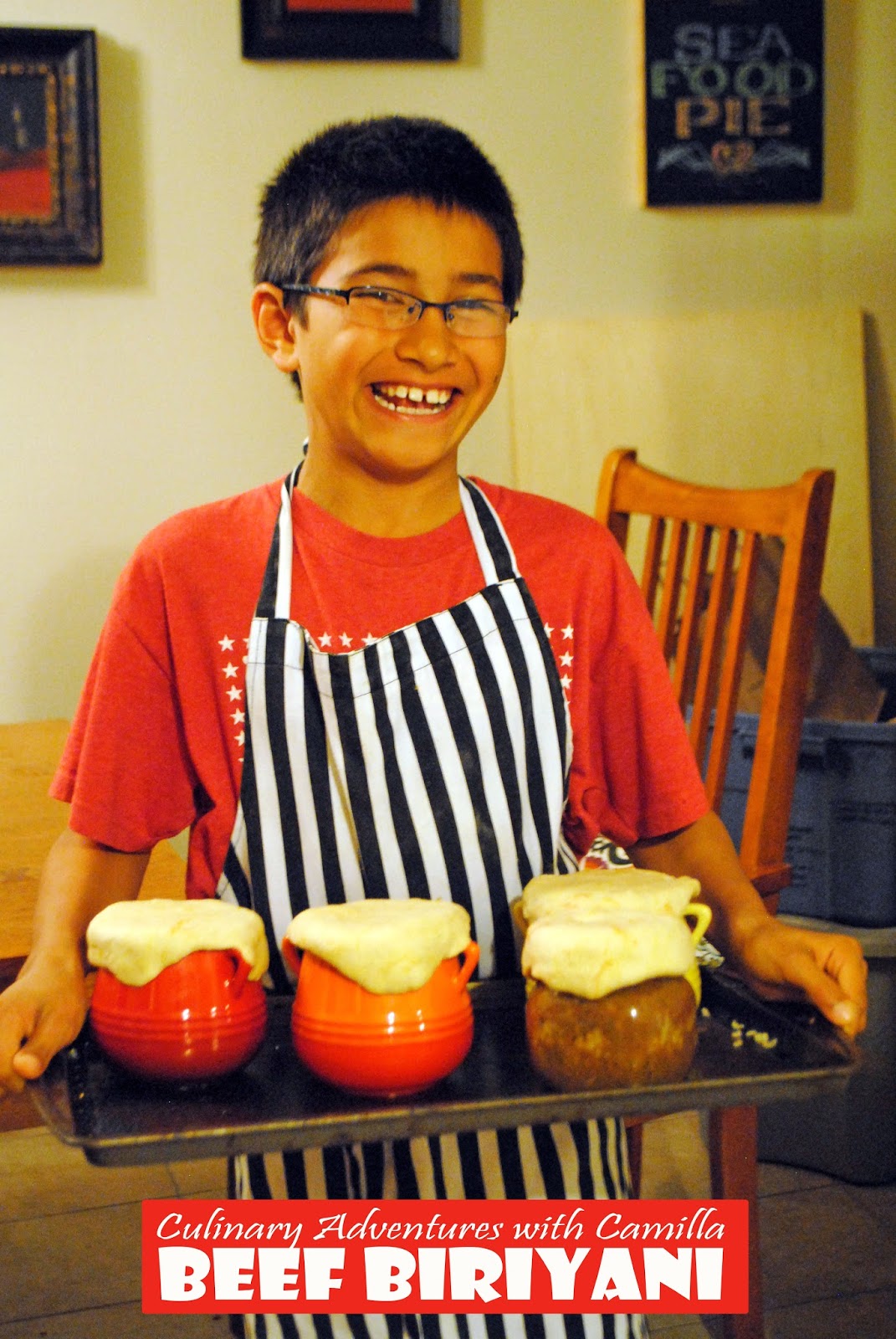 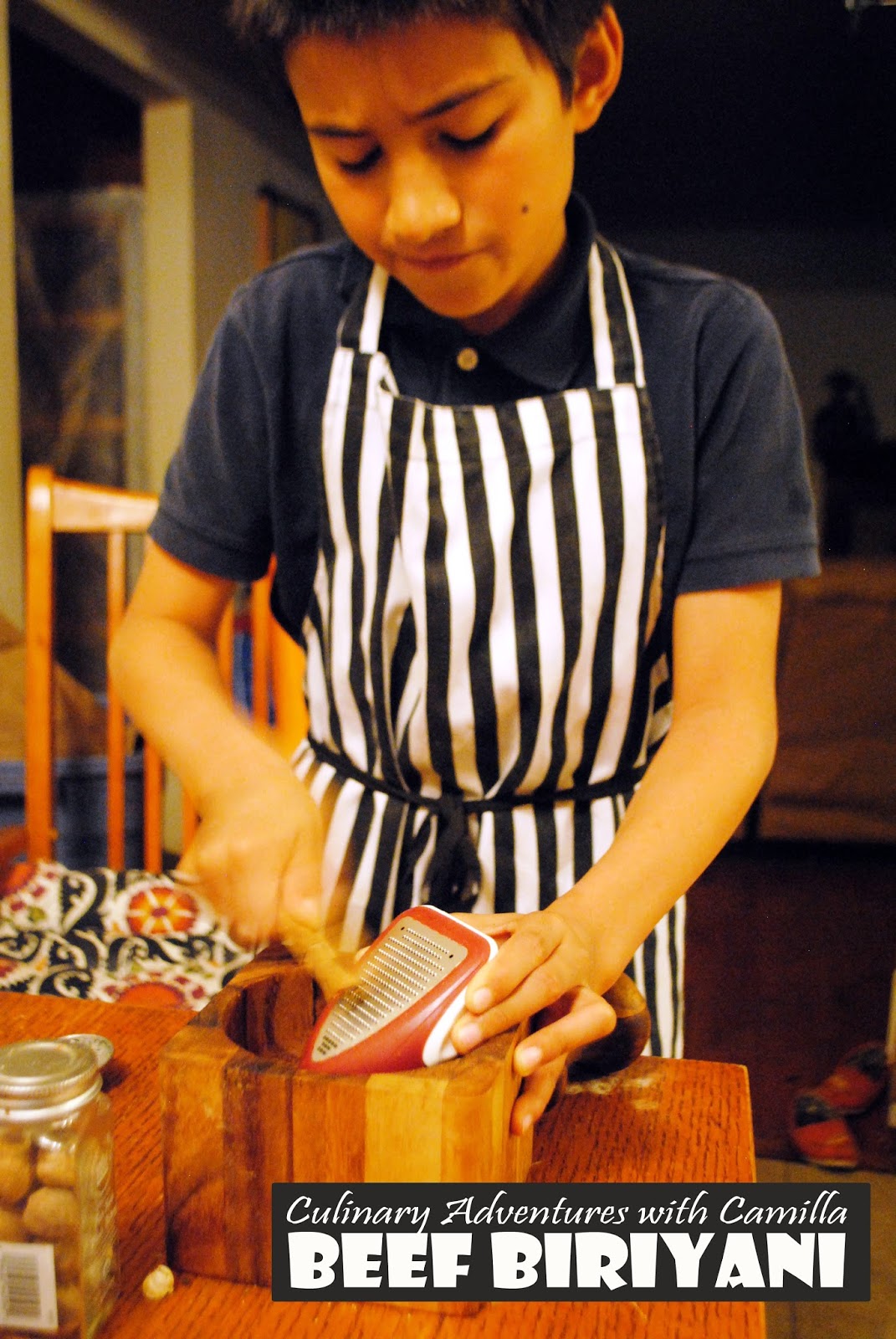 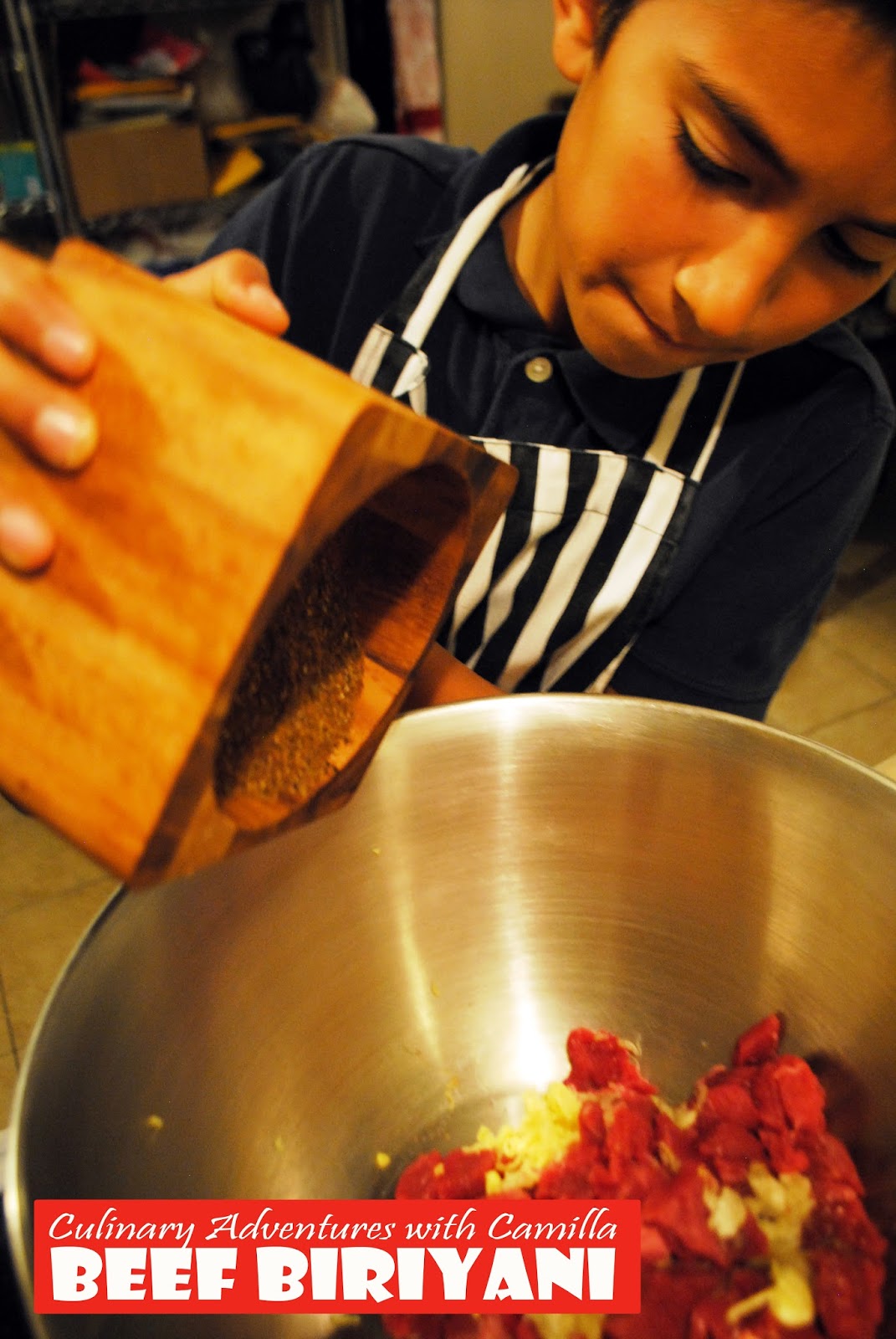 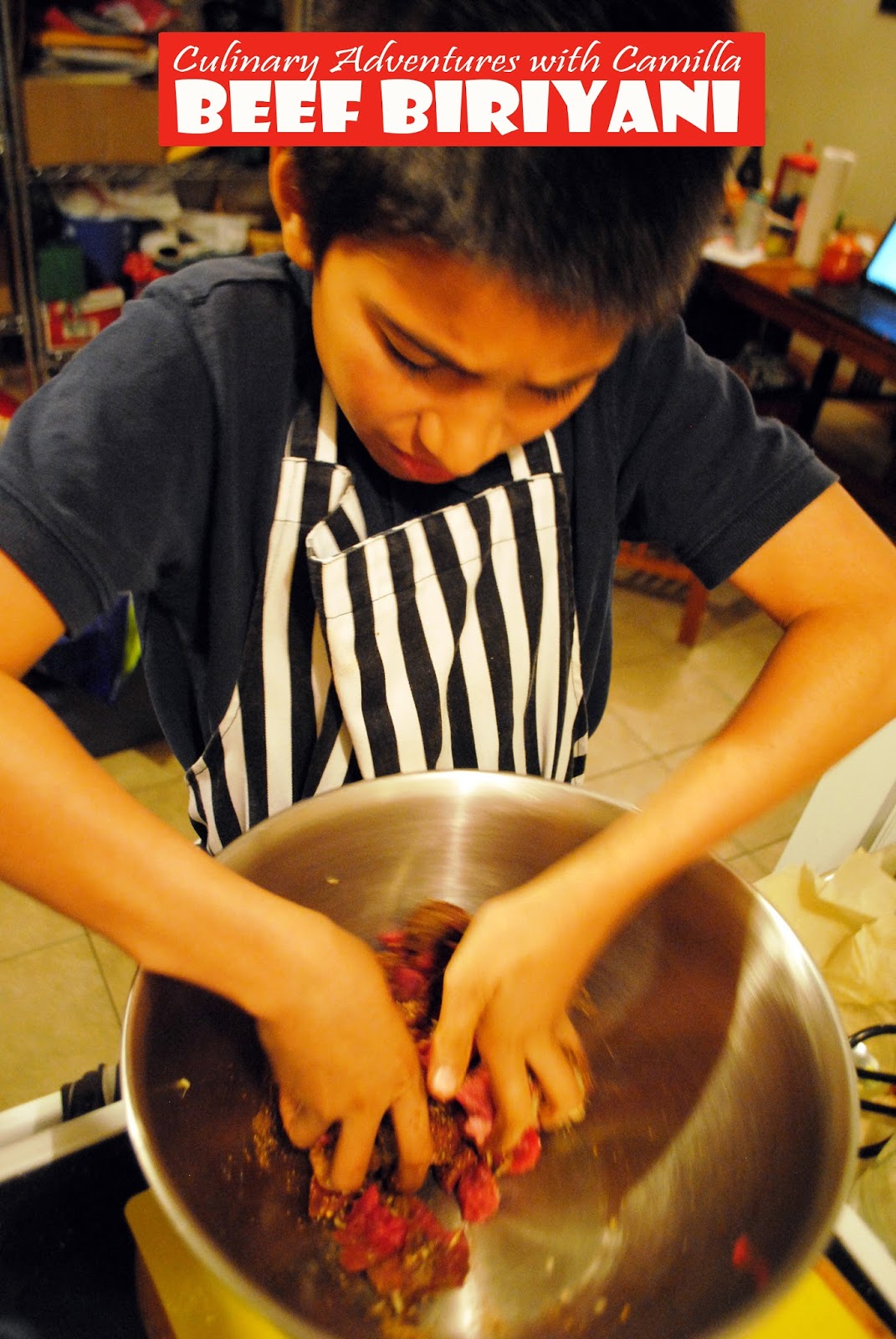 In a large pan - we used a Dutch oven - melt butter in a splash of oil. Brown the meat until golden on all sides. Remove meat from the pan and stir in the onions. Stir well. When the onions begin to soften, add the meat back in to the pan. 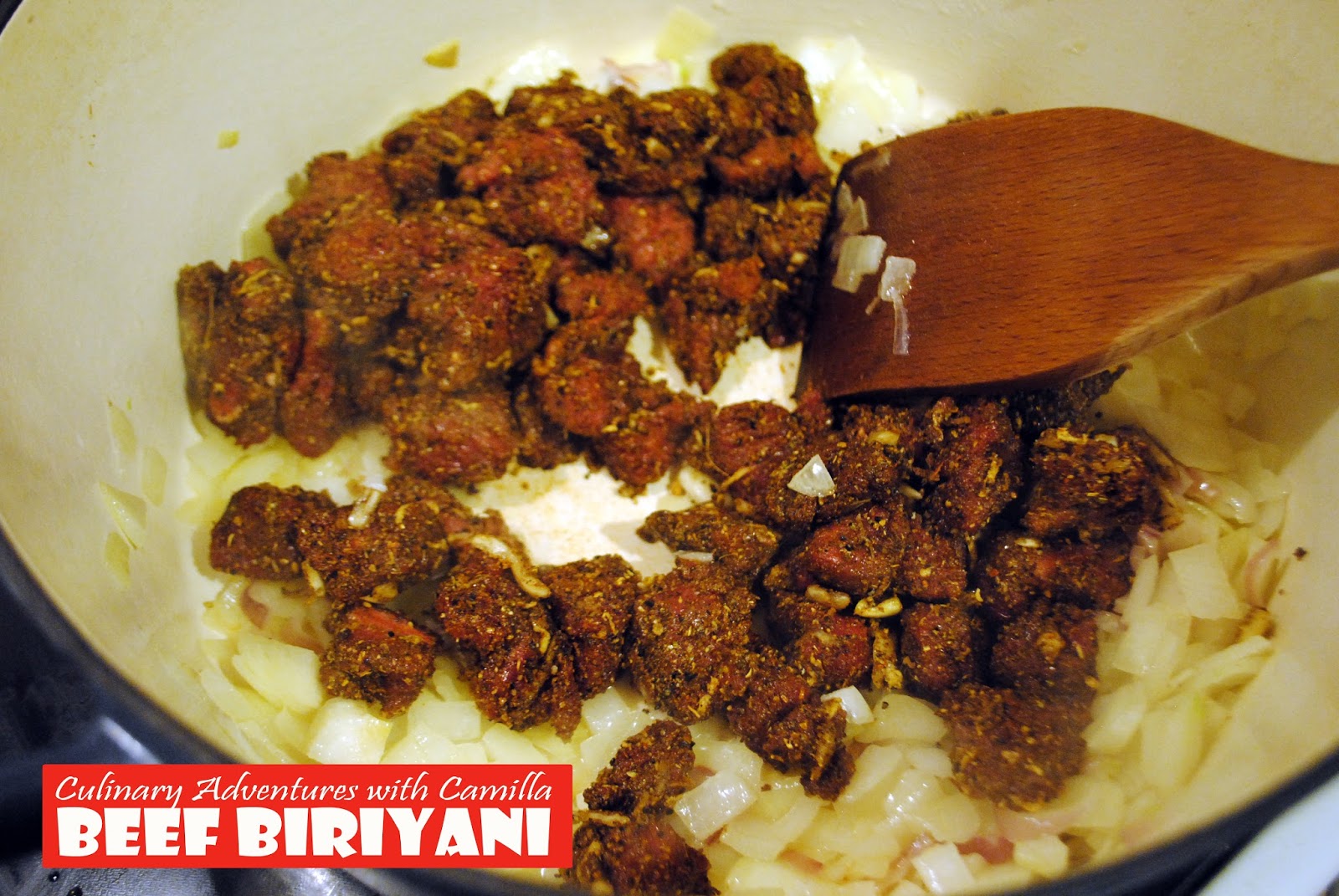 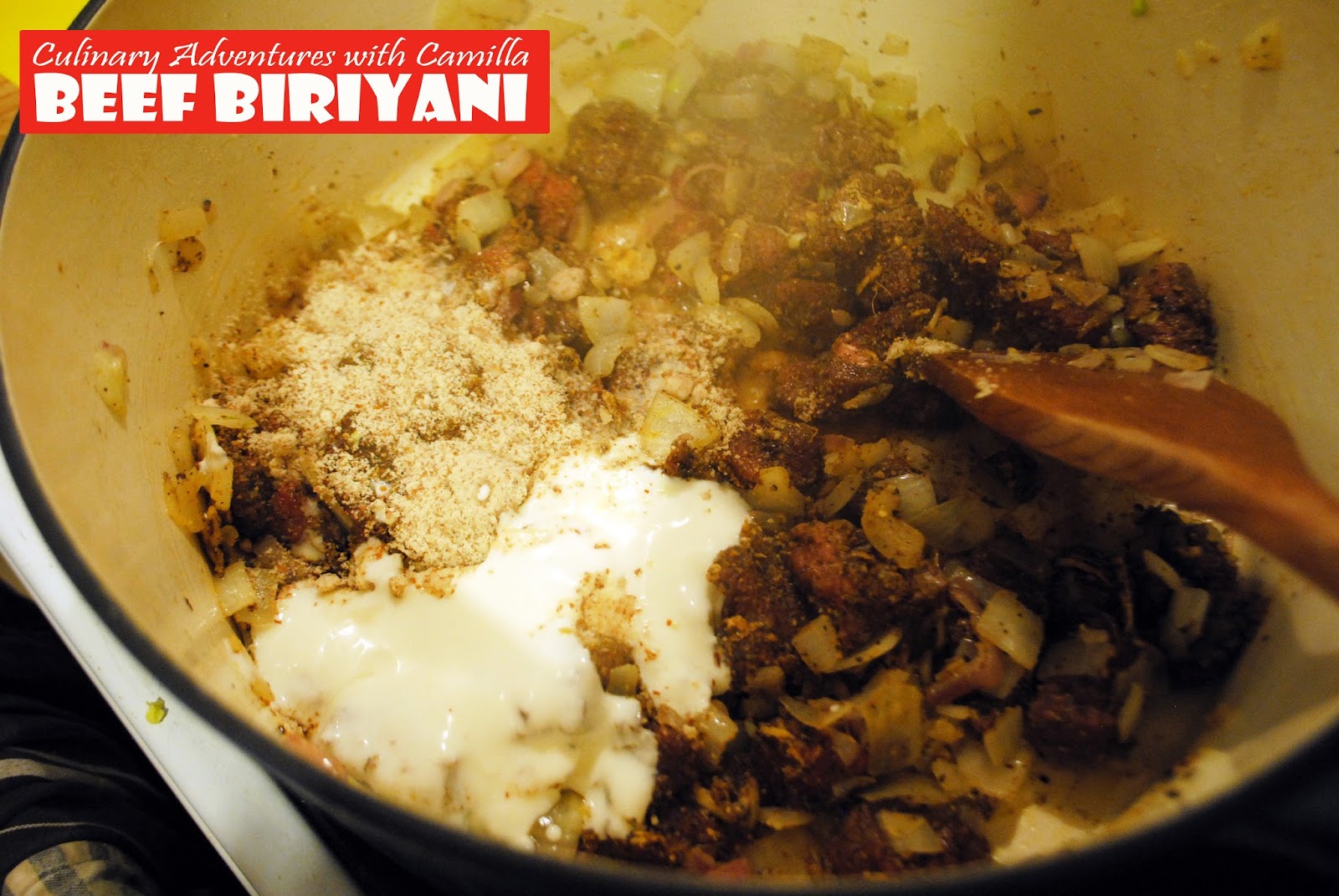 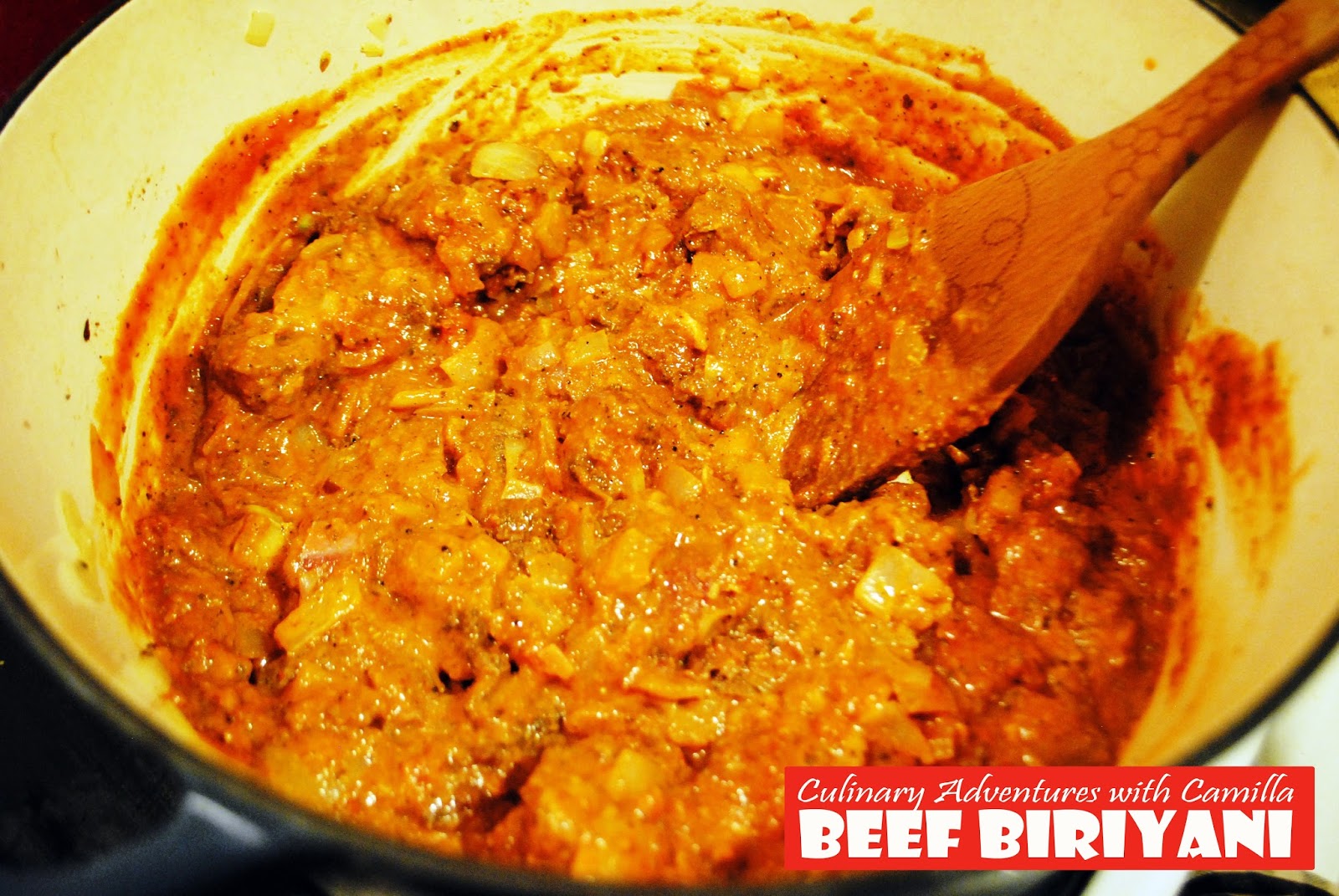 An hour before you'll be ready to assemble, soak your basmati rice in cool water and make your naan dough (see below). Bring your curry to room temperature if you refrigerated it over night. Drain the rice and cover it with boiling water. Add a pinch of salt. Let it boil for five minutes. Drain the rice, then return it to a covered pot to let it steam. Now to assemble your pots...

Drain the rice, place it in a lidded pot, and cover it with boiling water and a pinch of salt. Boil for four minutes, then drain and leave to steam in its pan with a lid. Spoon some of the beef curry into the bottom of your dish. Layer it with rice. Add a drizzle of saffron water and a sprinkle of freshly grated cinnamon. Repeat: curry, rice, saffron water, and cinnamon. 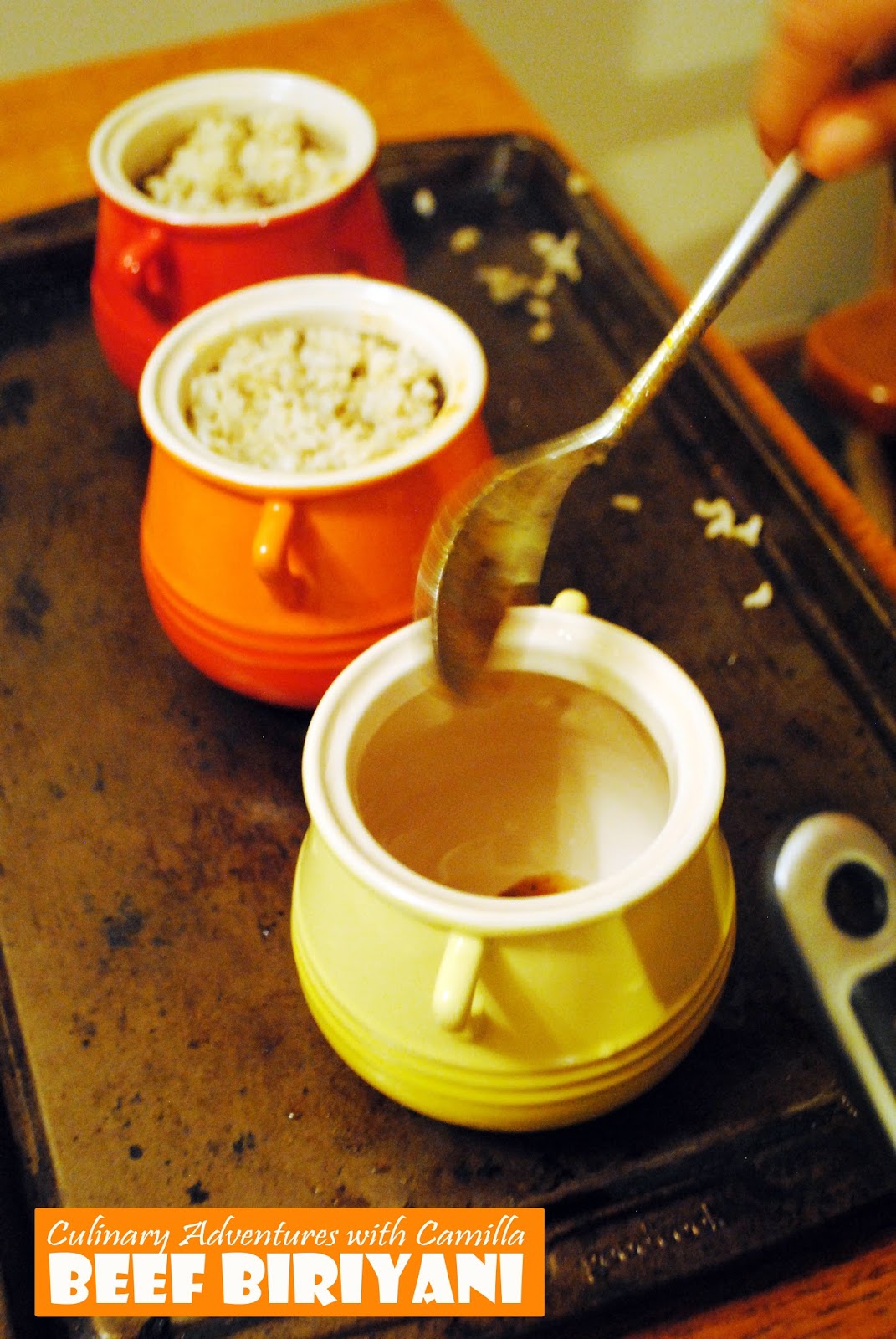 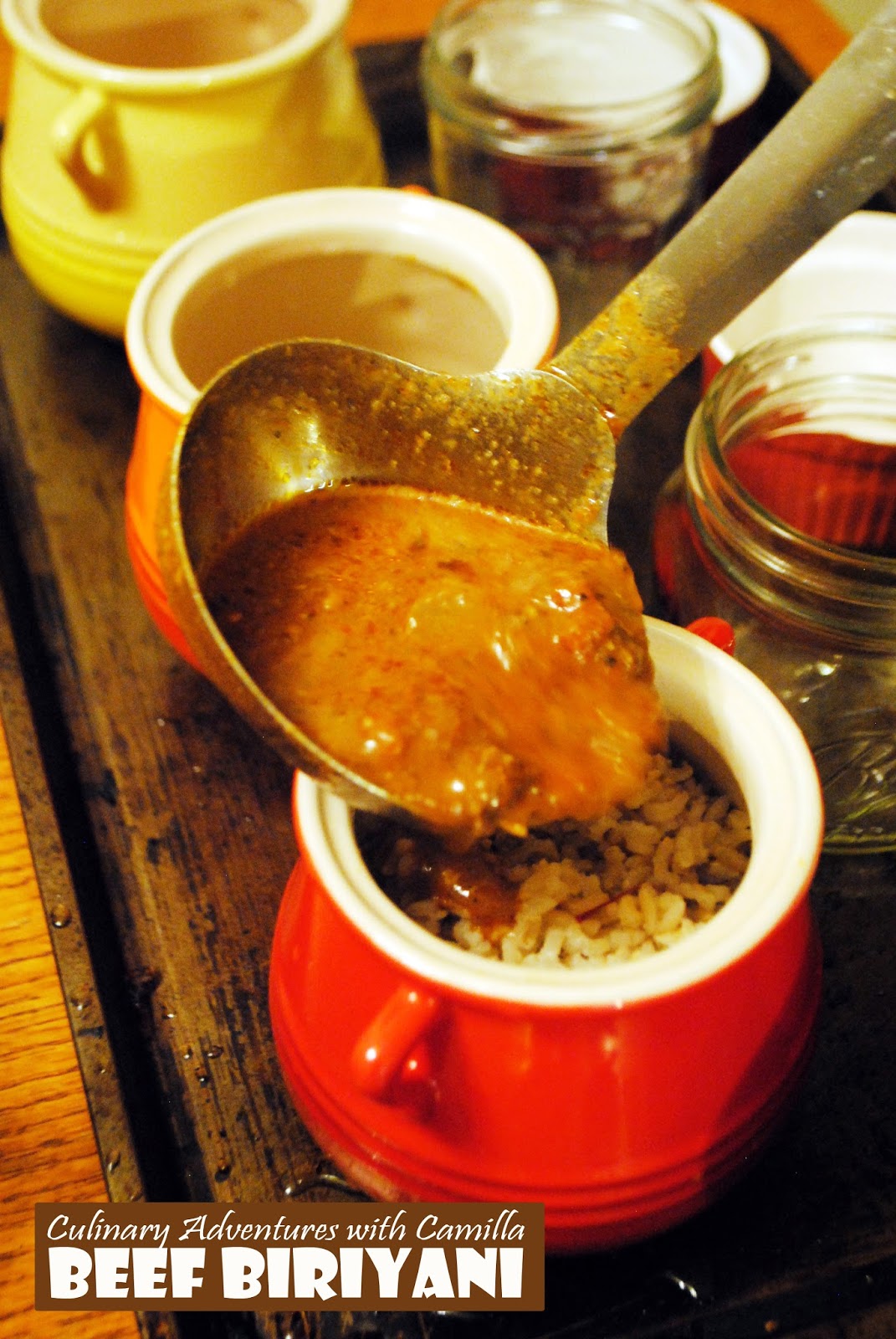 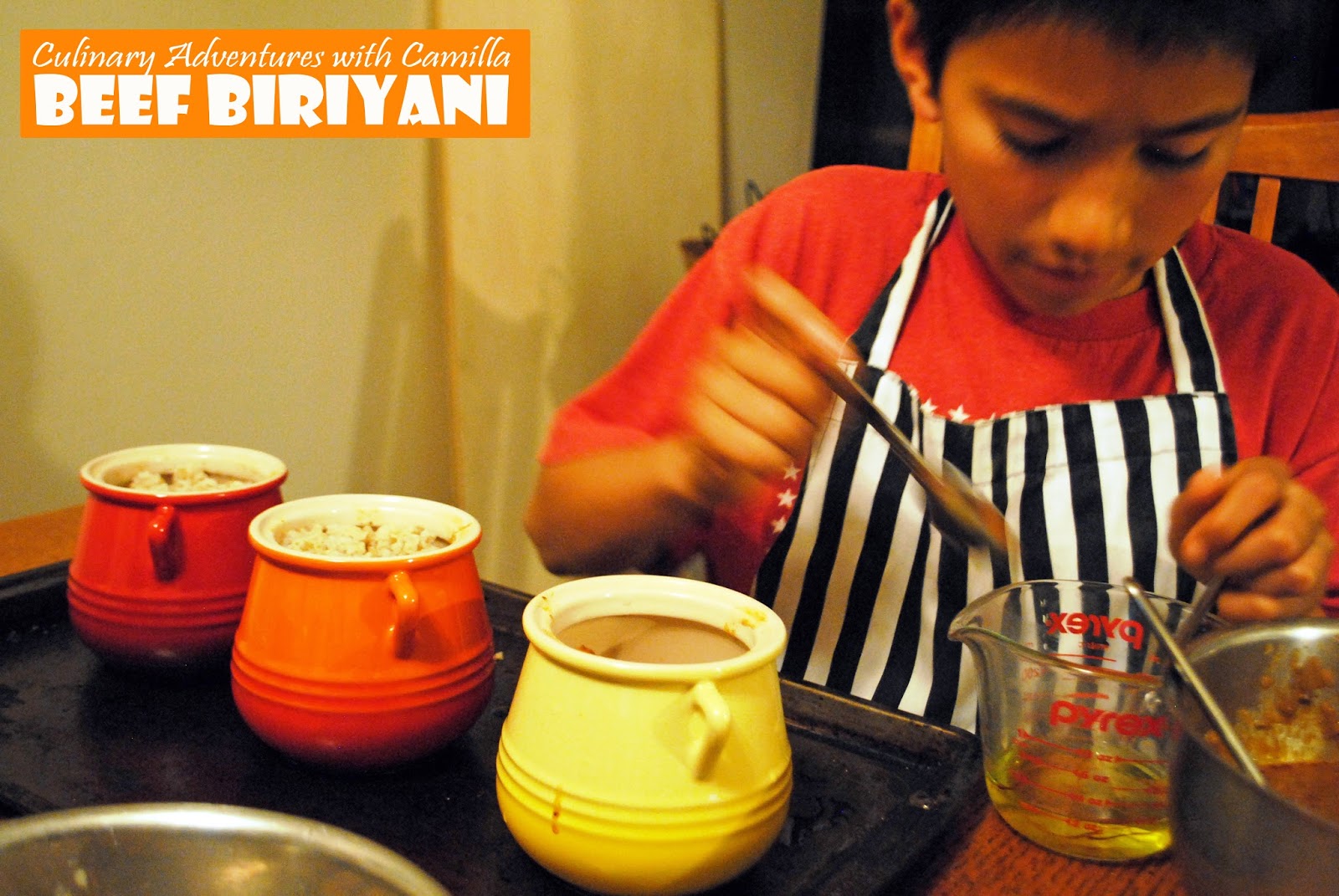 Once the yeast is frothy, add the yogurt and 1 T olive oil to it. Whisk to combine. Pour the yeast mixture into the dry ingredients and blend the dough together with a fork. As the dough begins to come together, dust your hands with flour and knead into a soft, sticky dough. Knead just till it comes together.

Once out of the oven, we rubbed the top of the naan with a tiny bit of rosewater and sprinkled on some edible glitter hearts - to make them fancy. Feel free to skip that. Just serve your biriyani pots with more naan on the side and whatever chutney you desire. 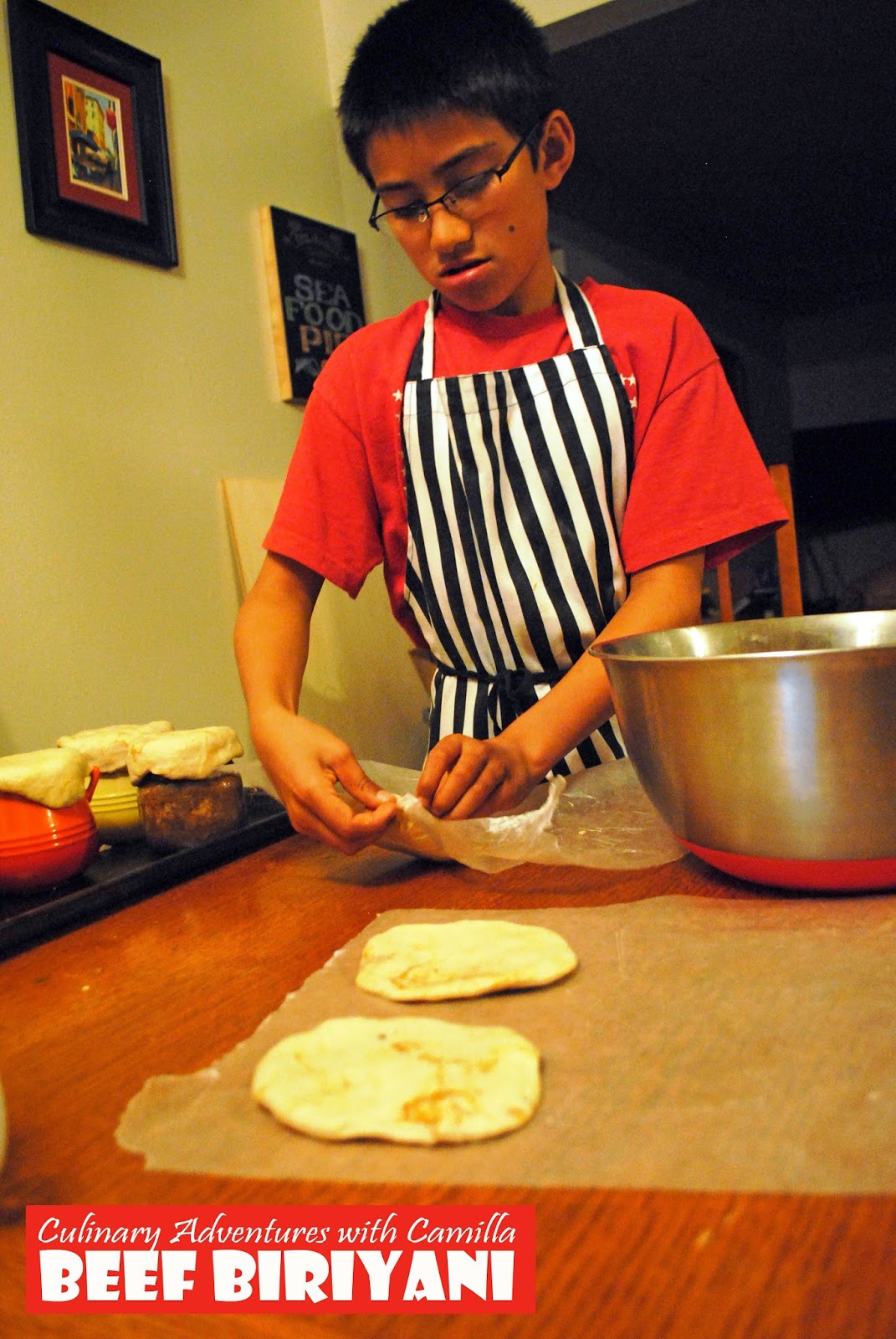 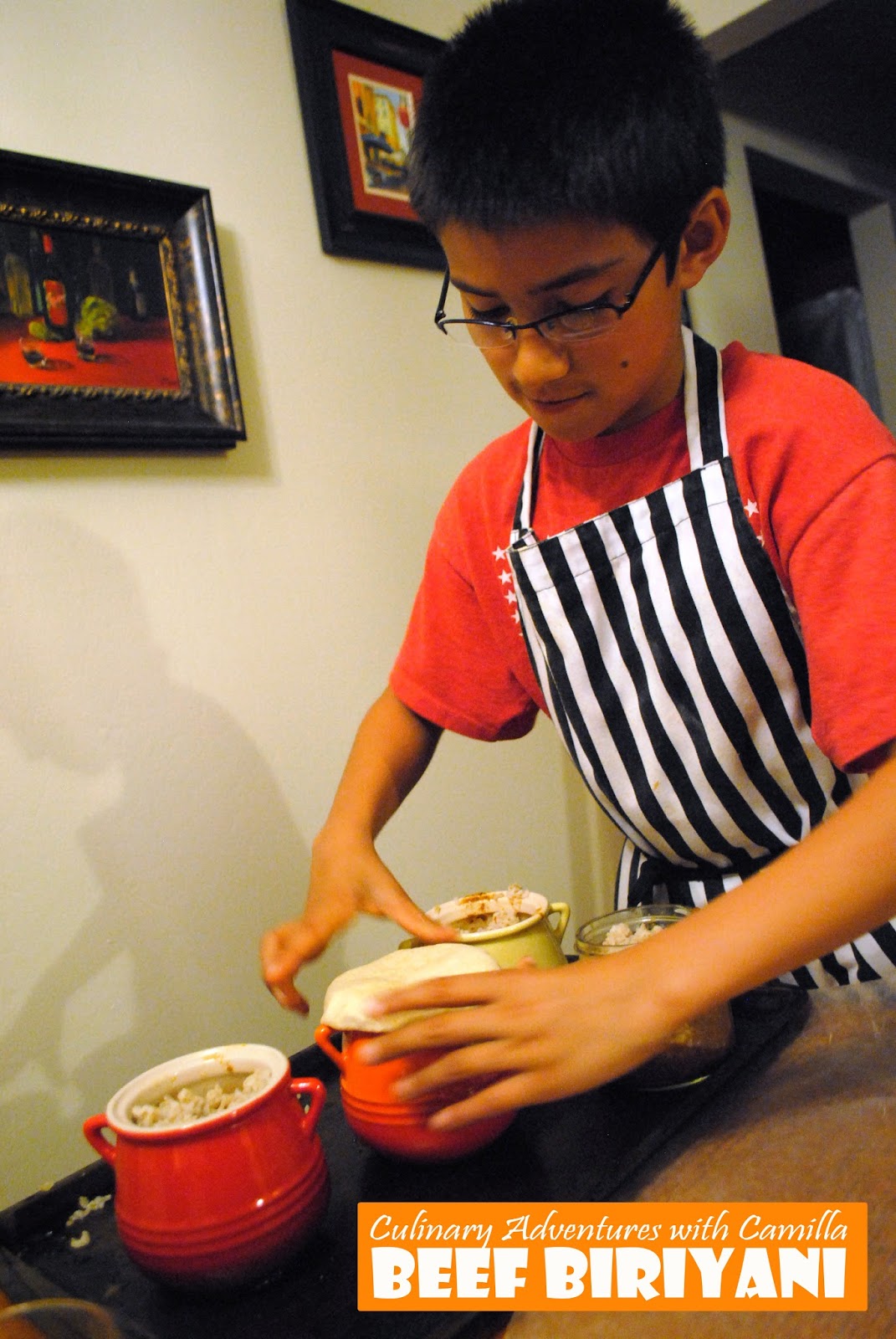 Grater Thoughts We use the V-etched Spice Grater, almost, on a daily basis now. I love its compact design because I can grip it firmly plus it fits easily into a prep bowl to catch any wayward pieces that might fly off of a cinnamon stick. It also has a slide-in container to catch the ground spices so you can measure before adding it to your dish. Additionally, clean-up is a snap. It is hand-wash only, but that works fine for us. 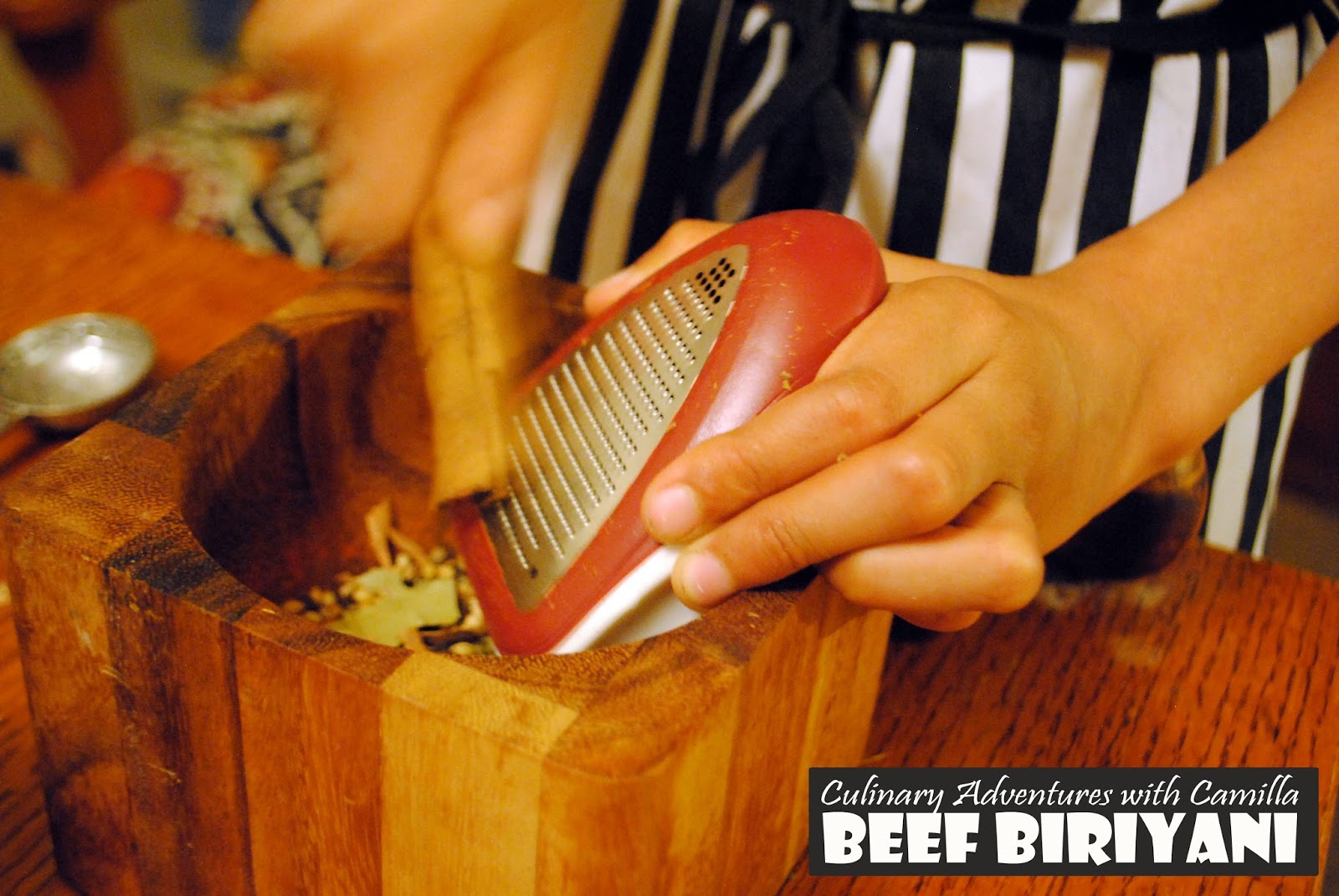 *I've provided affiliate links, below, in case you need any of these items.


**Full Disclosure: I received two V-etched Spice Grater from Kitchen IQ for participating in #TripleSBites! Feel free to use whatever spice grinder you have on-hand. I received no additional compensation for this post; all comments are 100% accurate and 100% my own.