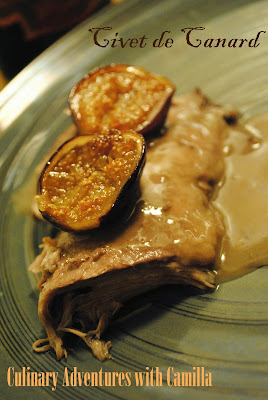 It's Food'N'Flix time - where we watch movies and head  into the kitchen and cook or bake or make something based on a recipe they actually make in it or just something we were driven to make after watching it.

This month's film - A Good Year - was selected by Tina at Squirrel Head Manor. You can see her invitation: here.

What a delicious foray into life in Provence! While the wine flows freely and the scenery makes me want to buy a one-way ticket to France, food doesn't have a starring role in the movie. Wine, yes. Food, not so much. The sole exception: dinner at Francis and Ludivine's home. Francis gestures at various home-cooked dishes at the table: caviar of eggplant, headless larks, mushrooms, and, finally, civet of wild boar, marinated in red wine, and blood pressed from the carcass. And that - those few lines - was enough to launch me on a culinary adventure to make a civet for myself.

The only thing I asked my boys: duck or rabbit? Though I chuckled to myself as I thought of Wittgenstein's duckrabbit. Is it a duck? Or a rabbit? What do you see?!? I actually hadn't thought about Wittgenstein's duckrabbit since I was getting my degree in philosophy, oh, so many years ago. Okay, enough of that! We're here to talk about food.What's a civet, you ask? Me, too!

Basically, it's a braise, with lots of bulbs from the onion family. The name comes from the old word for onion: cive. Ludivine made hers with wild boar; it's also commonly made with wild hare, lièvre, and duck, canard. I tried, unsuccessfully, to find fresh rabbit locally. Besides sending out Jake and Brian with a gun - which they offered to do - online and frozen were my only options. And I heard a horror story from a friend who's in the restaurant business. Recently another restaurant owner he knew ordered "fresh" rabbit and received frozen rabbit with a packing date of 2011 because it got held up in customs from China. Yuck. Duck it was!

One thing about this...it takes three days. When I started cooking years ago, I didn't cook anything that took longer than 30 minutes. Times have changed. And this was totally worth it. I pulled from many different recipes to create this, my take on...

Day One: Marinate the duck.

Line the bowl - or tupperware dish - with sliced mushrooms and sliced leeks. Stuff the cavity of the duck with onions, then place the duck on top of the mushrooms and leeks. Add chopped onion, 5 cloves of garlic, 2 carrots cut into chunks, a stalk of celery cut the same way, a few sprigs of thyme and 3 bay leaves.


Pour the entire bottle of wine over it. 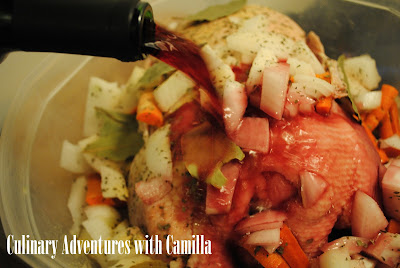 Traditionally the duck is braised in pieces. I opted to braise it whole.

In a pot large enough to hold the duck, heat up the butter. Then brown the duck, searing the skin on all sides. It will sizzle and pop. Once completely browned, lay the duck in the pot and pour the marinade over it. Add the chicken stock and sliced shitake mushrooms.

Bring the liquid to a boil, cover, and braise for 2 hours without disturbing it. Remove the lid and braise for another 30 minutes. Let cool completely and refrigerate overnight. 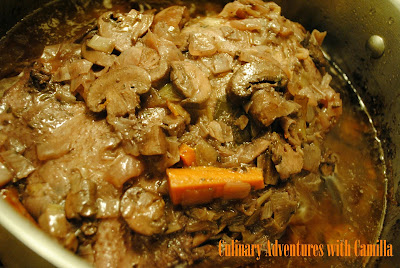 Remove the pot from the fridge and defat the civet. The fat will be solidified, so you can simply spoon it from the top. Don't skip this step!

Slowly heat the civet until all of the gelatinized parts have liquified, remove the duck and mushrooms. Set aside. 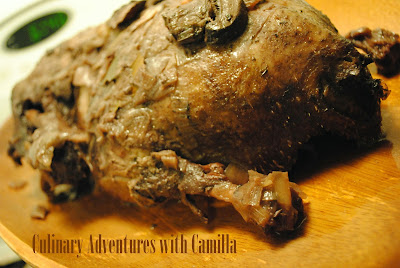 Strain the sauce into a bowl, keeping the sauce but skimming off the fat. Make a roux with butter and flour. Add in the sauce, whisking until you get a smooth gravy. Season with freshly ground sea salt and freshly ground pepper. Add in a splash of French brandy.

In a medium saucepan, lay halved figs and let them caramelize. Traditionally this recipe is made with plums; I had brown figs! 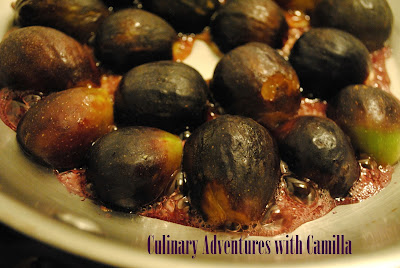 Arrange mushrooms and duck on individual plates, pour the sauce over the top and garnish with caramelized figs. 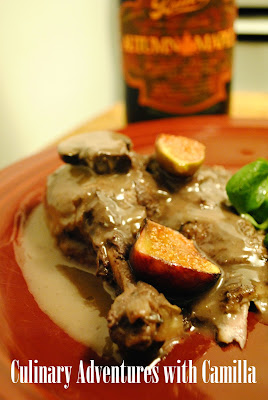 I served this with mâche rosettes topped with fresh figs and drizzeled with a fig-balsamic vinaigrette. This was a glorious dinner...and it was completely worth the three day process! And instead of pouring a French red with this, I poured a Belgian-style brown ale from The Bruery called Autumn Maple. It was the perfect match!

My favorite scene...when the boys gets the girl! And my husband said, "Aren't all women irrational, suspicious goddesses with short-tempered jealousy?!" Hey! Well...probably.


Next month, we're venturing back to the 70s with Evelyne, of Cheap Ethnic Eatz's, pick of Who is Killing the Great Chefs of Europe? I've never heard of that movie. Should be fun.