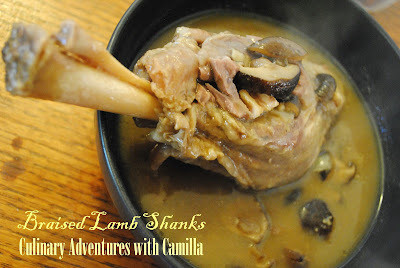 To go with the warm lobster salad for my dad's birthday dinner, my mom requested braised lamb shanks. I had done them for Thanksgiving last year. So, I did a variation for last night. This time - inspired by a story I'm writing - I decided to braise them in an earthy mixture of coffee, beer, and the soaking liquid from the dried mushrooms. I made a smoked paprika-cherry glaze for my dad's party; for what we ate at home, I left it as a mushroom demi-glace. 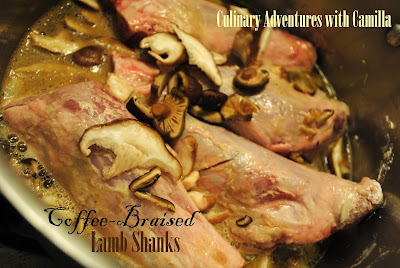 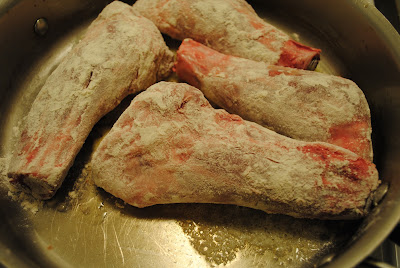 Place dried shitake mushrooms in a bowl and pour boiling water over them. Let soak for at least 20 minutes.

Coat lamb shanks with flour and cardamom. Heat remaining 3 Tablespoons olive oil in heavy large skillet over high heat. Working in batches, add lamb shanks to skillet and cook until brown on both sides, about 10 minutes per batch.

Simmer for one hour. Add in the fresh oyster and shitake mushrooms.

Bring mixture to boil. Reduce heat, cover and simmer until lamb is almost tender, turning lamb shanks occasionally, approximately another hour. Uncover Dutch oven and boil until liquid is reduced to sauce consistency, stirring and turning lamb shanks occasionally, about 30 minutes. They should be falling-off-the-bone tender! Season with salt and pepper to taste. To serve, spoon the sauce over the shanks. 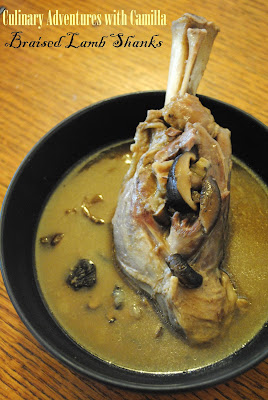 I wonder if you'd get the same results by following my 132 word version of this recipe. I doubt it.