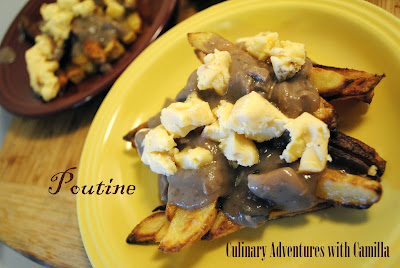 Okay, reserve judgment, folks. This is not a traditional poutine. I'll be the first to admit that. It's not deep-fried and there are no cheese curds involved. But it is poutine-inspired...and it is delicious!

I can't remember where I first heard the word, but I definitely had no idea what it was. Poutine. So, I did some reading. Then I asked one of my favorite Canadian foodie bloggers - Isabelle at Crumb - for a recipe. Here's hers. I loved that she used a duck confit and skipped the curds. I have nothing against curds; I just don't know where to find them and haven't had any reason to make my own.

In case you don't know what poutine is...it's a sticky mess of french fries, doused in a light brown gravy, and topped with cheese curds. It's a popular hangover cure in Quebec. Peasant fare peddled out of food trucks. That is until recently. It's moved into the mainstream, a new culinary darling in swanky bars from New York to San Francisco. In fact, I saw it on a menu at Jasper's Corner Tap & Kitchen a couple of weeks ago. No, I didn't order it. It looked artery-clogging, but delicious.

Today, I made my own version... 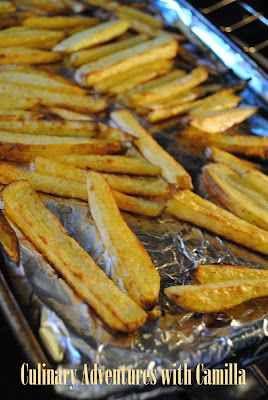 Preheat your oven to 450 degrees F. Slice your potatoes into strips. Place them in a large mixing bowl. Season with salt, pepper, and smoked paprika. Splash in some olive oil and toss to coat. Place the potatoes in a single layer on a foil-lined baking sheet. Bake till crisped and golden. Mine took about 35 minutes 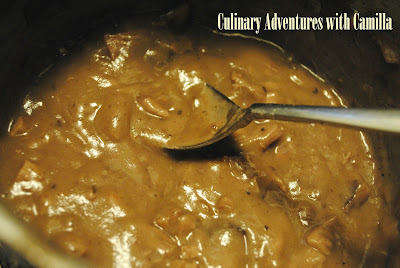 Duck Gravy
I had some leftover from our Civet de Canard last night. Just make a roux and whisk in some duck stock...easy peasy. I added in the some leftover duck meat as well.

The verdict: Jake liked it and said that it needed a beer. Riley liked the duck gravy - as he did last night - but didn't care for the cheese. Dylan just didn't the dish at all. And, as for me, it was a nice autumn project but not one that I will be making frequently. It's far too rich. But I'm glad I finally tried it. Thanks for the inspiration, Isabelle.