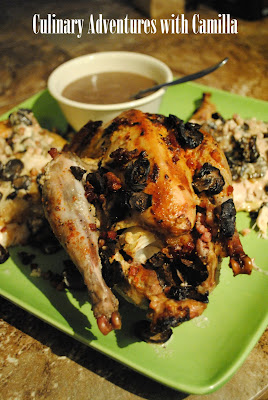 When I was trying to come up with a menu for my mom's birthday dinner, I put out the ask for suggestions. One of my foodie pals posted: "My grandma used to make pheasant. I swear I remember marshmallows in the recipe..."

Staci ended up asking her dad who said that it wasn't marshmallow, it was heavy cream. Sounded perfectly decadent and just the ticket for my mom's Crème de la Crème birthday dinner. I sort of made up the recipe as while I went along...and it turned out fantastic.

Quick note: my friend, and boss, told me to just cook it here at work, so I didn't have to run home and then leave my oven on while no one was there. He wants it mentioned that he provided the oven and deserves some credit. Okay, credit given. Thanks for letting me fill the office with delicious smells without sharing anything with you! 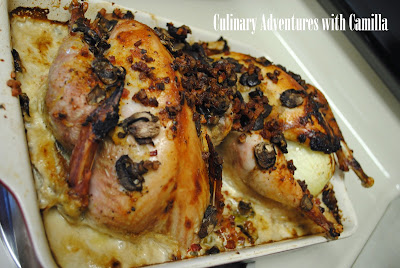 First, I have a funny story about acquiring these birds! I called the grocery store where I remember getting a pheasant a few Thanksgivings back. Here's how the conversation went...

Do you have any pheasant?
What?
Pheasant? Do you have any?
You mean like the movie?!?
What?
Maybe you need to talk to the Meat Department...
That would be good. Thanks.

The answer was a negative. They used to carry it. No longer. Then I called another reputable meat market. That was just as unfulfilling...

Great. Two strikes. Then I decided to call one last store.

Do you have any pheasant?
Let me check.
[phew...he knows what it is and I don't have to spell it!]
Ma'am, pheasant is a seasonal item. We don't have any yet.
Oh...okay. Do you have any other suggestions?
I might be able to order some.
That would be great!

And they did! So grateful. 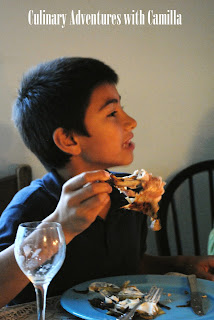 Preheat the oven to 325 degrees. Stuff the bird with the halved onion. Rub the bird with garlic and place it in a baking dish. Sprinkle with salt, pepper, and paprika. Top it with the pancetta and mushrooms. Drizzle the bird with olive oil, then pour heavy cream over the top. Place it - uncovered - in the oven.

Riley declared that this was his favorite part of the dinner. Dylan said, "It's okay." But he did eat every morsel on his plate. I found this amazingly moist and tasty. Thanks, Staci. We loved it. 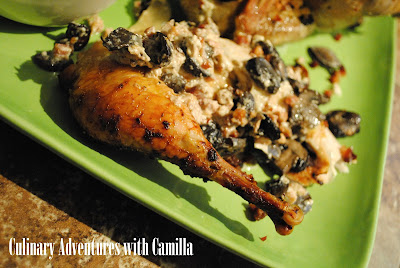