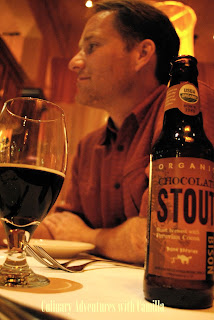 While we were at Millennium on a deliciously fun double date, we, uncharacteristically, opted to order beers versus a bottle of wine.

Jake and Brian ordered two bottles of organic chocolate stout from Bison Brewing out of Berkeley. They craft their Original Chocolate Stout with Peruvian cocoa and describe it as "Barry White’s voice in a bottle."

While Bison’s Chocolate Stout is not new to us, it is still as amazing as ever! It's rich with voluptuous flavors of dark chocolate and espresso, with a creamy, dry finish.

The new-to-us beer was Uncommon Brewer's Baltic Porter, an ale brewed with two of my favorite flavors: licorice and star anise. 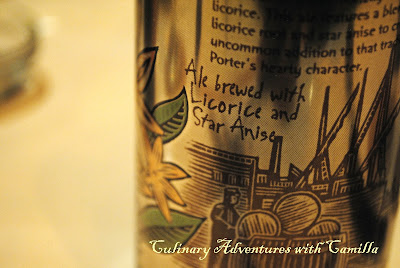 Late in the 18th century Britain's great brewing families were striving to break into new markets. For the Baltic Sea ports they created a version of their traditional British Porter. Styled like an IPA to preserve them for the voyage, those Baltic Porters served to ward off the chill winds of that northern sea.

When the brewers at Uncommon Brewer's weren't satisfied with their Baltic Porter's traditionally subtle hint of black licorice, they amped up the flavor with whole licorice root and star anise to create a unique addition to that traditional export Porter's hearty character.

It was delicious. I typically don't buy beer in cans. But I will definitely buy this again...as soon as I can find it!