A Food52 Potluck on the Monterey Peninsula
Story and Photos by Camilla M. Mann

The etymology of ‘potluck’ falls into two camps. One camp clings to the literal compound – pot + luck – and credits its first use to Thomas Nash, a 16th century British writer, to mean food cooked for an unexpected or uninvited guest, as in the guest gets “the luck of the pot” or whatever the cook has on hand. Another camp claims that it’s the misspelling of the Native Americans’ potlatch. Potlatch from the Chinook, means "to give away" or "a gift;” traditional potlatch ceremonies, in the Pacific Northwest, involved the redistribution of wealth within a community and were accompanied by singing, dancing, and bartering, as well as feasting. The only thing a potluck and a potlatch have in common: it’s a meal with no particular menu. Each participant brings dishes to share with others. 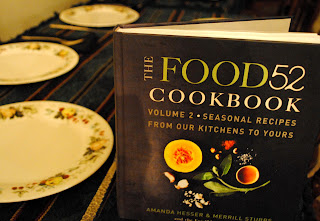 When I agreed to host a potluck, during the month of December, for the publishers of Food52 to celebrate the launch of their second cookbook, I didn’t take into consideration just how jam-packed my schedule was. To the usual holiday madness, add my little one’s birthday, the annual holiday fund drive for the foundation that I chair, birthday parties for four of our close friends, two of those whose birthday treats I always make, two rounds of Secret Santa, and parties upon parties upon parties. December quickly descends into chaos with sticky notes all over my calendar to remind me where I’m supposed to be next. So, what was I thinking committing to putting together a potluck where guests were invited to bring dishes from Food52’s website?!? Clearly, I wasn’t. 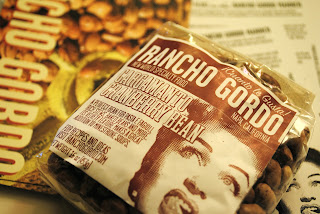 Thankfully, my parents decided that their annual holiday party would be the perfect venue for a Food52 potluck. They invited several friends from their ballroom dancing circle – artists, retired teachers, meteorologists, and more. It was quite a multi-talented group. They dance, they play instruments, they sing, and they cook. All I had to do was put together some foodie schwag bags – from Food52’s sponsors –, cook, show up, take some photos, scribble some notes, and taste the dishes that paraded through the door.

Steve, who owns his own outdoor pizza oven, baked some rosemary focaccia. Based on his vast experience with turning yeast, flour, salt, and warm water into pillowy goodness, I don’t think that he used a Food52 recipe; but if he had, this one might be close. 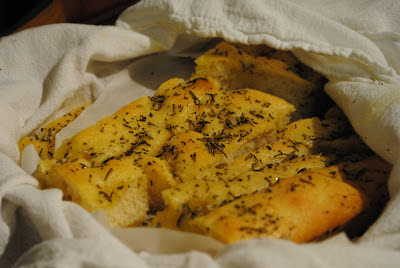 Yi selected Absurdly Addictive Asparagus, the Best Asparagus Recipe Contest winner posted by kaykay. She reported that the recipe was easy to follow and she really loved the photographs. The resulting dish was delightful. It was, as promised, absurdly addictive and I’ll be making it again soon. 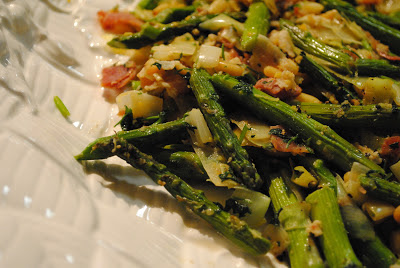 Theo brought Thanksgiving Osso Buco posted by QueenSashy in the Best Thanksgiving Turkey Recipe Contest. Though this didn’t win that contest, it was a winner in our book. And, it turns out that this was the second time that Theo made the osso buco. His first attempt used chicken while his potluck offering was made with turkey. The chicken rendered the dish too dry, so he swapped poultries. Osso buco is traditionally made with veal shanks. That I knew, but I learned that osso buco also requires that the meat and bones be cut in a particular way; they are cross-cut with the bone in. As soon as Theo lifted the lid off his dish, the aromas of allspice, cinnamon, and nutmeg swirled together and made my mouth water. 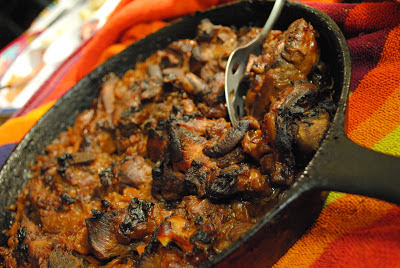 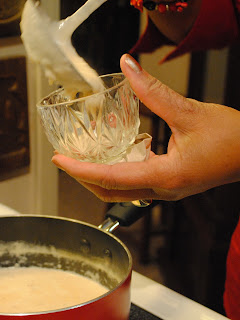 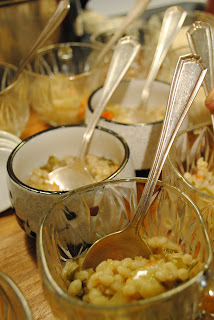 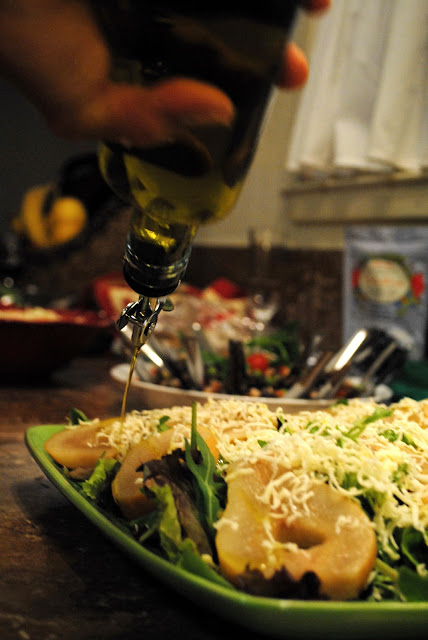 Other dishes included roasted pork tenderloin, clam chowder, greens with poached pears, wild rice salad, and the two dishes that I made with my current culinary obsession: fennel pollen. I made a fennel-barley soup and a roasted fennel dip [click the names to read the recipes on my kitchen blog, Culinary Adventures with Camilla]. An article I read about fennel pollen dubs it “culinary fairy dust” and I couldn’t agree more. Just a sprinkling takes a dish from delicious to divine. 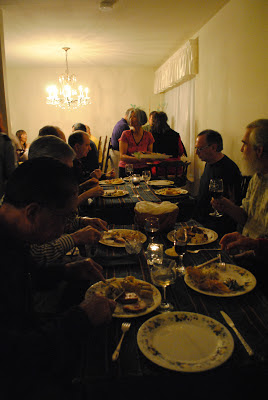 I was thankful for the opportunity - from Food52 - to get some likeminded people around tables who were willing to explore the collection of recipes...and share their creations.

This gathering of dancing cooks was, as a potluck should be, a communal feast full of laughter and libations.

*Full disclosure: In exchange for hosting this potluck, I am receiving complimentary copies of The Food52 Cookbook, Volume 2: Seasonal Recipes from Our Kitchens to Yours, beans from Rancho Gordo, and butter from Olli's Handcrafted Cultured Butter.