'Tis the Season to Savor the Seafood at La Balena 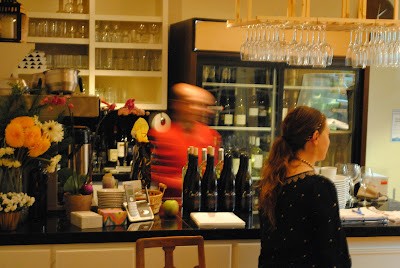 I have crossed paths with Anna and Emanuele Bartolini, owners of La Balena, at a few different local good food events. They are a duo that you can’t help but adore. Their philosophies about life and food are impressive and reflected in the choices they are making at their restaurant. From the tables in the main dining room that are made from reclaimed trans-Pacific shipping crates to the bench seating that they rescued from a local Habitat for Humanity store, refinishing the wood and upholstering the cushions themselves, and the fact that their menu is simple, seasonal, and sourced from local suppliers as much as possible, Anna and Emanuele aim for excellence in all aspects of preparation and presentation of traditional, rustic food with the spirit of a classic Italian Enoteca.

Originally the Bartolinis explored opening an enoteca, literally a library of wine instead of books. But an enoteca, as defined by the Associazione Internazionale Enoiteche, must offer a minimum of 100 different wines that represent at least ten different regions of Italy, five regions of France, and two other countries.  Additionally, an enoteca must carry at least five kinds of grappa and one brandy. Instead of focusing on those daunting quantities, Anna and Emanuele opted to create their wine list with local artisanal vineyards and serve some small production Italian wines with the same standards.

Tucked off the main street in Carmel – on Junipero between 5th and 6th – La Balena, which has been open for less than a month, is heavy on charm and lovely details. And I have been eager to dine at the Bartolini’s California restaurant with a Tuscan heart, since the doors opened and the chefs declared Pronto al tavolo! 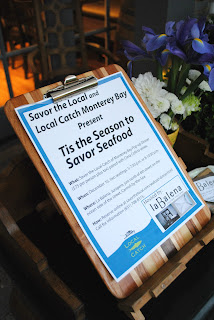 Last night, I finally had my chance. Jake and I headed to La Balena with some friends for a pop-up dinner presented by Savor the Local. As Colleen Logan, the director of Savor, explained, she aims to shine the spotlight on local farmers and food artisans, bringing them to the community and linking people to the Earth via their food. The other components of the festive feast: fresh seafood from Local Catch MontereyBay, organic produce from Mariquita Farm, wines from Cima Collina, and – most importantly – the culinary stylings of Chef Brad Briske. There was no printed menu. Just amazing food, great wine pairings, and good company 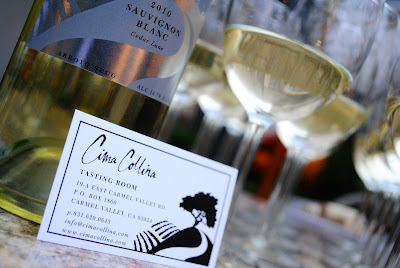 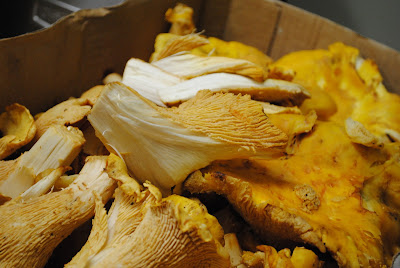 As we mingled outside and Colleen checked people in, Jane Beery of Cima Collina started us off with a 2010 Sauvignon Blanc. Made with grapes from their Cedar Lane Vineyard, at the mouth of the Arroyo Seco Valley, this wine is slightly grassy and floral with aromas of grapefruit. Cool and crisp, it was a nice way to start the evening.

Peter Eichorn of Country Flat Farm in Big Sur strolled up to the entrance and handed a box of freshly harvested mushrooms from Palo Colorado to Colleen who took the bounty back to Chef Brad. These saffron-hued, fleshy chanterelles appeared on our plates less than an hour later.

Once inside, we were seated at communal tables, introducing ourselves to our tablemates and settling in for an impressive parade of innovative dishes from la cucina. Here’s what we ate… 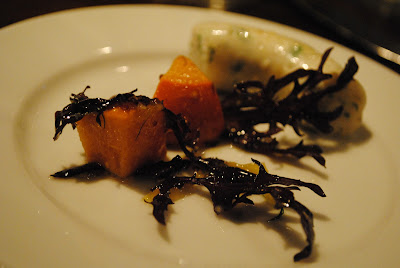 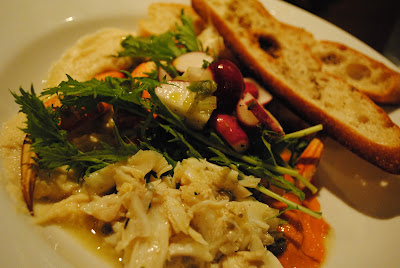 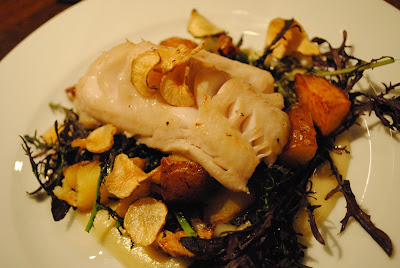 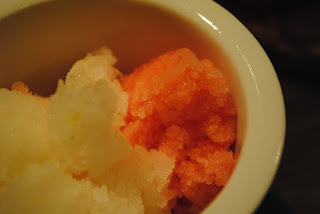 Between courses, we cleansed our palates with some Meyer lemon and blood orange ices that Chef Salvatore Panzuto made before he left for Italy.

And for dessert: Armagnac ice cream with still-warm cantucci.

All of Chef Brad’s culinary creations were elegant and innovative, with a mélange of textures and flavors. Each dish was comprised of layer upon layer of distinct but complimentary flavors.

The pop-up at La Balena – ‘Tis the Season to Savor the Seafood – was a lovely collaboration between the Bartolinis, Savor the Local, and Local Catch Monterey Bay, with some help from Cima Collina, Mariquita Farm, Country Flat Farm, and Burst and Bloom. 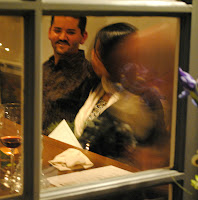 What a delightful evening with my love and our great friends! And the perfect way to kick off this festive season. I am looking forward to more culinary adventures with these local purveyors in the new year and beyond. Cheers and happy holidays!