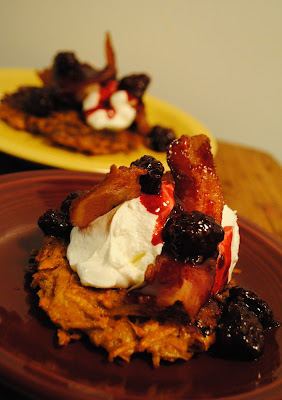 This morning I decided to kick off Hanukkah with sweet potato latkes, sour cream, bacon - we're not really Jewish! - topped with fresh blackberry sauce. Riley pulled out his menorah; Dylan located his dreidel. So, I just need to remember to pick up some chocolate coins today.

Okay, I already mentioned that we're not Jewish. But we are attempting to raise socially-aware citizens of the world who are not just tolerant of, but are knowledgeable about, religious and cultural differences. So, we celebrate Hanukkah...and a host of other religious holidays that have nothing to do with our personal beliefs or lack thereof.

Mix together 1 shredded sweet potato, 1/4 C white whole wheat flour, dash of nutmeg, dash of ground ginger, splash of milk, and two beaten eggs. Heat oil in a large flat-bottomed pan. When the oil is hot, spoon 1/2 C of the sweet potato mixture into skillet, spreading into flattened rounds with a fork. Cook until undersides are browned, about 5 minutes. Turn latkes over and cook until the other sides are browned, about 5 minutes more. Transfer to paper towels to drain. Slather with sour cream and top with crisped bacon. Spoon fresh blackberry sauce - 3 C fresh blackberries, 1/4 C raw turbinado sugar, and 3 T water cooked to your preferred consistency - on top.