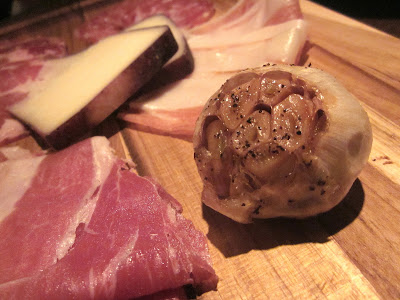 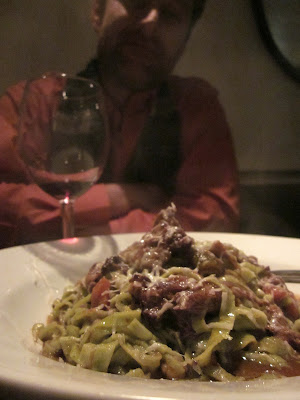 I am, admittedly, not Italian by birth or even genetics. But because I lived in Italy as an adult, learned to love food in Italy, and cook Italian on most nights that my family is not traveling by tabletop on our Cooking Around the World Adventure, I am a tough critic of Italian restaurants. Brutal.

Nothing annoys me more than an Italian restaurant whose menu has typos or whose servers blatantly mispronounce Italian words. 'Bruschetta' is, probably, the most egregious error that grates on my ears. Say it with me, people. Brew-SKEH-tah. There's no 'sh' sound in that word.

In any case, I'm difficult to impress when it comes to Italian cuisine. But when Jake and I found ourselves kid-free for long enough to duck out for a dinner date, our pick was unanimous and we eagerly made our way to La Balena in Carmel for the third time in a week. Yes, three times in one week...really three times in five days. That's saying something!

Restaurants that have to assert "authentic" usually aren't. La Balena makes no such claims. They don't need to; they are the real deal. And since all of the tables were packed on a Wednesday evening, with a couple of people waiting for a vacant seat, other people must know it, too.

We started with the salumi selection [photo up top] and found ourselves moaning in delight. Literally moaning. I can only imagine what the people at the next table thought. But the roasted garlic was so creamy that I could have eaten the entire head all by myself. And the selection of meats and cheese, including a prosciutto crudo di San Daniele, were the perfect way to start our meal. We shared a glass of Salice Salentino from the Cantele vineyard in the southern tip of Puglia. It was balanced, soft, but confident. 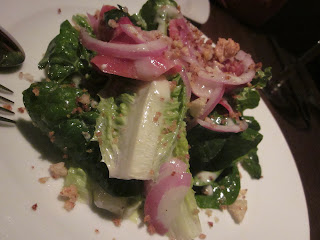 Next we ordered the insalata gorgonzola. The Savor the Local pop-up showed just how Chef Brad Briske layers flavor upon flavor that magically don't compete but, with each bite, have you wondering just what's in the dish. The salad was just like that. Crisp greens, sweet fresh onions, thin slices of something red that we still can't agree on - beets, but without the earthiness?!? - layered on a plate, tossed with a light gorgonzola foam, and sprinkled with a confetti of crisp bits of bread. I am not a big fan of croutons; it never occurred to me to break them up. Genius!

And the dish that prompted me to write this post: Tagliatelle alla Menta. Minted tagliatelle with a lamb ragù. Two bites in and I would have sworn I was back in Italy. It was hearty but not heavy. Comforting. Delicious. None of the flavors - and there were many - overwhelmed the others. It reminded me of dinners I would cook in Rome. So fresh. Che squisito!

Chef Brad, Chef Salvatore Panzuto who is currently in Italy, and owners Anna and Emanuele Bartolini have created an authentic Italian experience tucked into a tiny restaurant in Carmel. I was transported by that tagliatelle. So, until I can scrape together enough money to buy four tickets to Italy, I'll just dine at La Balena.