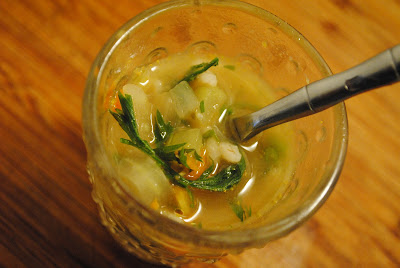 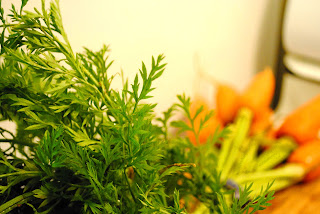 As the part of my Food52 potluck fennel pollen trifecta, I stuck fairly close to the recipe that was posted by Cara Frank: Carrot Top Farro Soup, but swapped out the farro for barley, added some sambuca, and left out the garlic.

I still hear Maria's voice in my head in my head: Non cucinare con la cipolla e l'aglio insieme. (Don't cook with onions and garlic together.) Maria is the Italian woman who taught me to cook in Rome. I almost never break her rule.

*Cara's original recipe called for 1 C of fennel pollen. That's almost $50 worth of fennel pollen. I suspect that she meant 1 C fennel fronds; I only had about 1/2 C, so I added in sambuca for more licorice-y goodness. 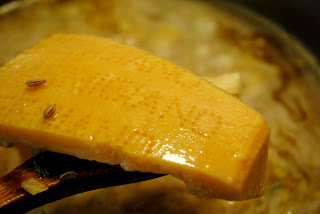 Slice the carrots into coins. Wash the carrot tops carefully and chop them finely. Heat the olive oil in a soup pot and add the carrots, onions, celery and fennel. Saute until tender, Add in the barley, the broth, and the parmesan rind. Simmer for 30-45 minutes until the grains are almost tender. Add the chopped greens, sambuca, and the fennel pollen. Cook for another 10-15 minutes until done.

Locate the parmesan rind and scoop it out. Serve hot with grissini.