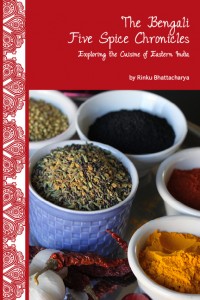 I am one of thirteen bloggers who has received copies of the Rinku Bhattacharya's new cookbook The Bengali Five Spice Chronicles from Hippocrene Books. Over the next few weeks, I'll be cooking from, reviewing, and giving away a copy of the book.

Tonight was my first dinner based on Rinku's recipes. The Bengali Five Spice Chronicles is a deceptively small volume, with less than 300 pages; once you crack the cover, however, you find yourself engulfed in fifteen chapters with multiple recipes per page. It was initially daunting, but my trepidation quickly transformed into giddy enthusiasm once I began to explore her recipes.

And her recipes...let me just say that I had a difficult time choosing what to make for dinner. Tonight I settled on two of her recipes from Chapter 7, Vegetarian Entrees, serving them with side of steamed quinoa. 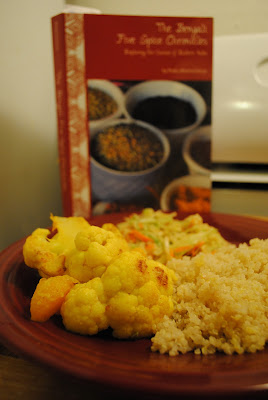 *I omitted the cayenne and the cilantro but added Meyer lemon juice.

Rub the cauliflower pieces with turmeric. In a large, flat-bottom pan, heat your oil. Then cook the seasoned cauliflower until it is cooked through and golden in spots. In a large bowl, whisk together the mustard, water, and lemon juice. Pour that over the cauliflower, toss to coat completely, and cook until the liquid is absorbed. Stir in the clementine sections and cook for about a minute. 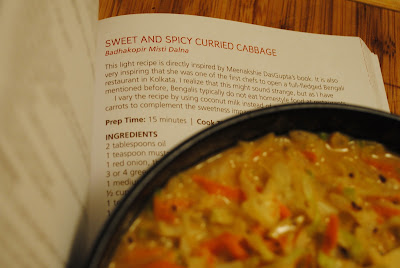 *I omitted the onions and the green chilies.

In a large, flat-bottom pan heat the oil and add the mustard seeds. Cook until they begin to sizzle and pop. Add the cabbage and carrots and mix well. Cook until the vegetables begin to soften, approximately 4 minutes. Add in the cumin powder, coconut milk, sugar, and salt to taste. Simmer until the coconut milk is absorbed.

The Verdict on Dinner I...
These dishes were easy to make, teeming with flavor, and rendered my family silent at the table. Amazing! They were too busy enjoying these exotic flavors to talk. And when they were finished, Dylan, my almost nine-year-old, declared the dinner 'red book worthy.' My red book is where all of our family favorites go. Rinku, that's high praise!

I am thrilled with The Bengali Five Spice Chronicles so far. I can't wait to delve into more of her recipes. Stay tuned...