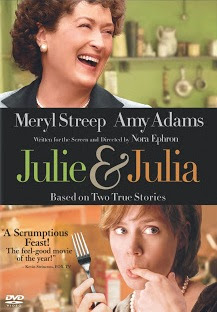 When I saw that Leslie, from La Cocina de Leslie, had chosen Julie & Julia for this month's Food'N'Flix, I ran right out to the store and bought the DVD. I've seen the movie before, thoroughly enjoyed it, and was happy to watch it again...and own it. And I was just reading about Julia Child in The United States of Arugula. Perfect timing.

Click here to see Leslie's invitation to her movie selection.

Julie & Julia is phenomenal on so many levels. It's the story of how two women from completely different generations claim their identities through food: Julia Child and Julie Powell.

Meryl Streep is astonishing as Julia Child; not surprising as she's amazing in every movie she does. But it's almost eerie to watch her inhabit the roll. She becomes Julia. She is Julia. Amy Adams is charming as Julie Powell, the blogger who sets out to cook through Julia's Mastering the Art of French Cooking in a single year. 524 recipes in 365 days.

There were so many different things to cook from the movie...Beef Bourguignon for starters.

Chocolate Cream Pie, a comfort food if ever there was one. "I love that after a day when nothing is sure and when I say nothing, I mean nothing. You can come home and absolutely know that if you add egg yolks to chocolate and sugar and milk, it will get thick. That's such a comfort." Julie explained to Eric.

Artichokes with Hollandaise, though I personally think that artichokes should be enjoyed naked - the artichoke not the eater! Julie muses, "...hollandaise sauce...is melted butter that's been whipped into a frenzy with egg yolks until it's died and gone to heaven. And let me say this. Is there anything better than butter?"

But, in the end, I decided on Sole Meunière, Julia's first meal in France that awakened her culinary yearnings, and Concombre au Beurre because I was intrigued by Julie's commentary during her birthday dinner. "Braised cucumbers are a revelation," she breathes...almost to herself before she pops a forkful into her mouth. 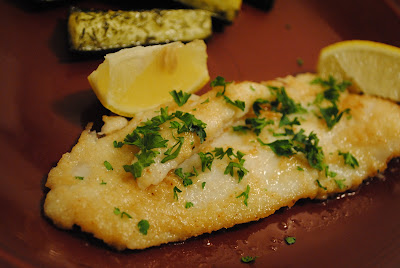 I followed Epicurious's version to the letter. Click here for that recipe. But I used some culinary license for the second dish... 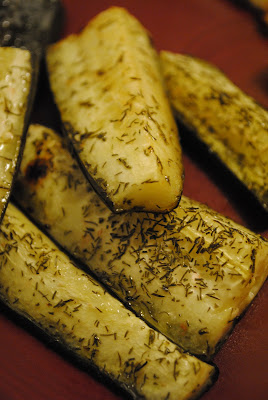 While the original recipe called for the cucumbers to be peeled and deseeded, I left mine intact. I also skipped the green onions and used more dill than originally listed.


Procedure
Toss the cucumbers in a bowl with vinegar, salt and sugar and let them stand for 30 minutes to an hour. Drain them and dry them with a towel.

Preheat the oven to 375 degrees F. Place the cucumbers on a baking dish with the butter, herbs, and pepper. Set, uncovered, in the middle of the preheated oven for 1 hour, stirring or tossing a few times during the course of cooking. The cucumbers are done when they are just starting to have a hint of brown color, and they are tender with still a touch of crispness.

Reflections
I have to admit that while I loved the movie, I wasn't enamoured by the dishes that I picked. Too heavy on the butter, for my tastes, and though the cucumbers weren't slimy as I feared they would be after an hour in the oven, they were still an odd texture - silky and firm at the same time. Odd.

Next month we'll be watching and cooking Willy Wonka and the Chocolate Factory. What a perfect choice for a month full of sweet treats. Stay tuned!