Cooking Around the World: Kiribati 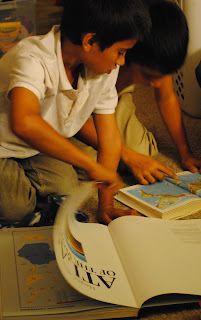 I know what you're thinking because I was thinking the same thing: where the heck is Kiribati? Is that even a real country?!? But that's all part of this cooking around the world adventure - learning for the entire family. The boys didn't even blink; they just pulled out their atlases and went on the hunt.


Kiribati is not a single island. It's comprised of 32 atolls and 1 (actual) island halfway between Hawaii and Australia in the South Pacific Ocean.

Kiribati used to span the International Date Line until, in 1995, the government voted to move the line eastward, so that the entire country would occupy the same time zone. With the new millennium in 2000, Kiribati was publicized as the first land on Earth to welcome in the year.

Kiribati remains a very traditional culture. Despite colonial occupation, its people continue to thrive on fish, breadfruit and coconut and live in traditional raised thatched dwellings.

The I-Kiribati have a traditional dance that emulates the frigate bird's movements. The frigate bird appears on their flag. The dance may be performed in a standing or seated position; either sitting or it is considered bad form to smile while dancing, as dancing is perceived to be a solemn form of storytelling which displays the teller's skill and determination.

When I was searching for possible recipes for tonight's dinner, I didn't have much luck. Some articles I read listed foods that were almost identical to Filipino foods. Then I found - on Global Table Adventure, my inspiration for this entire project - a recipe for Roasted Lobster with Coconut Curry Sauce. 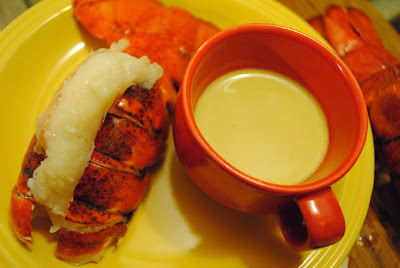 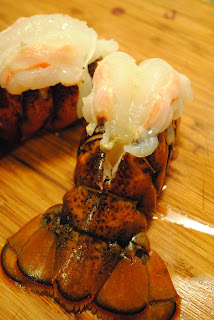 Using kitchen shears, cut each lobster tail down the back, stopping at the last segment before the tail piece. Bend back the tail until you hear a loud crack. Slip a knife between the meat and the bottom membrane, freeing tail meat from the shell. Pull the meat up and over the shell, closing the shell shut beneath it. The tail meat, then, piggybacks on top of the shell. This was entirely new to me, but Sasha provides a video if you need more help.

Coat the lobster meat with a generous coating of oil. Bake for 1 1/2 minutes per ounce of weight. Meanwhile make the sauce. Place the coconut milk and spices - to your tastes - in the saucepan. Simmer until heated through. Salt to taste. I used this as our appetizer. 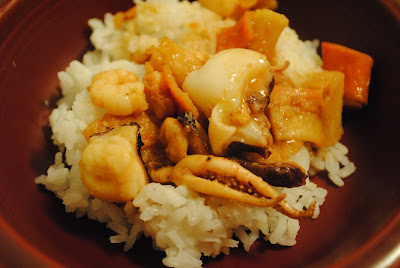 For our main dish, I whipped up a seafood adobo. 1 C of mixed seafood per person + 1 T minced garlic + 1 t ground ginger + 1/2 C vinegar (I used white balsamic) + 3 T soy sauce. Cook that all together until the seafood is opaque. Serve over white rice.

And that's a wrap on Kiribati. The Koreas, North and South, are on the list next. I am going to have to do some research to see how distinct the cuisines really are; I might just cook those together.