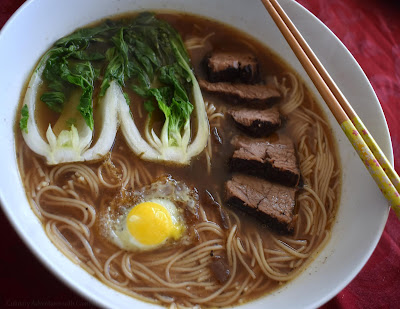 This month, I am hosting the Food'N'Flix group as we watch and -  hopefully - get inspired into the kitchen by Spirited Away. This is definitely out of the range of movies the group usually watches, but I hope that the other gals join the fun.
On the Screen 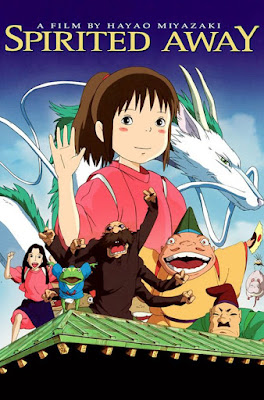 I had never heard of this movie until my boys purchased it on Amazon. They have long been fans of Studio Ghibli movies though I have never watched any of the movies with them.

However, the first time they watched it, both commented that I should suggest it to my foodie movie group. I largely ignored that suggestion until I was reading through a list of top twenty-five films that food lovers have to watch. Okay. I was convinced and offered to host it for our foodie, movie-watching group this month.

For those unfamiliar, as I was, Hayao Miyazaki is the Japanese animator, writer, director, producer, and filmmaker whose work with Studio Ghibli has resulted in creative and influential animated films, including: Princess Mononoke, My Neighbor Totoro, The Wind Rises, and this month's Food'N'Flix pick, Spirited Away, among many others. Released in 2001, Spirited Away won that year's Academy Away for Best Animated Feature and is Japan's highest-grossing film of all time.
Set in the mountain village of Juifen, in Northeastern Taiwan, Spirited Away tells the story of a girl named Chihiro who finds herself trapped in a spirit world. A witch named Yubaba has cast a spell on Chihiro's parents, for gluttony, and transformed them into pigs. Chihiro meets Haku who helps her navigate the world in which she finds herself. In order to save her parents, she works in Yubaba's bathhouse - a veritable spa for fanciful and oddball spirits - while working to free her parents.

When I finally sat down to watch the movie, sources - and my boys - were correct. The food is animated in amazing detail. Everything from the onigiri (rice balls) to the konpeito (sugar candies) to the ishi-yaki-imo (stone-roasted sweet potatoes) made my mouth water.

The food in Spirited Away is animated with intricate detail. Some of it is Japanese: Chihiro noshes on onigiri (rice balls) with her parents; Lin feeds konpeito (traditional, brightly colored Japanese sugar candies) to the animate soot balls; and even ishi-yaki-imo (stone-roasted sweet potatoes) appear on screen. Food is also powerful and magical. Haku warns Chihiro that she must keep eating the spirit world's food or she won't be able to stay in the world. Think reverse Persephone! And, it's a magical cake that restores Haku and No-Face to their pre-cursed forms.

But because the setting is fashioned after an actual town in Taiwan, I set about researching traditional Taiwanese foods and was intrigued by Hong Shao Niu Rou Mian, a braised beef soup. This dish didn't appear in the movie, but everyone in my household was grateful when it appeared on our table. 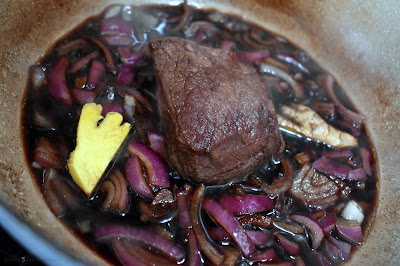 I should note at the get-go that this is not a traditional preparation of this dish which includes shaoxing wine. After I made this dish, I realized that shaoxing wine is a rice wine. At the time, I just used whatever wine I had...which happened to be a red wine. As I said: this is not a traditional version. But I love that the beef is braised in an delicious, aromatic broth. We will certainly be making this again soon. 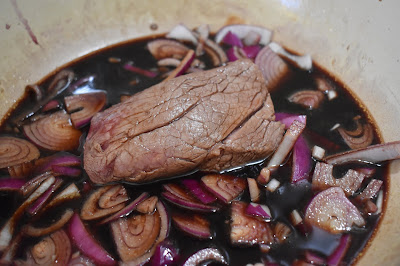 Procedure
Rub the Chinese five spice and salt into the beef. Add a splash of olive to a large pot and heat until it shimmers. Brown the meat on all sides, approximately 1 to 2 minutes per side. Then add in the onion and ginger. Pour in the soy sauce, wine, stock, and water. Stir in the chili bean paste and brown sugar. Bring to a boil. Cover and reduce heat to a simmer. Let braise for three hours. 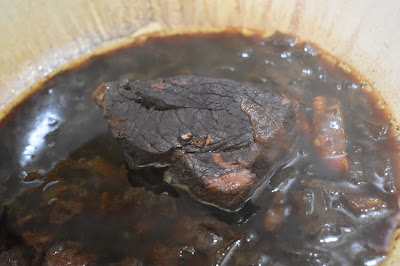 Bring  your beef stock to a boil. Add 1/2 cup of the braising liquid from the meat.

In another large pot, bring water to a boil. Blanch the bok choy and remove. Add the noodles and cook until just done. Remove noodles and rinse briefly under hot water. Poach your eggs in water and remove for serving. 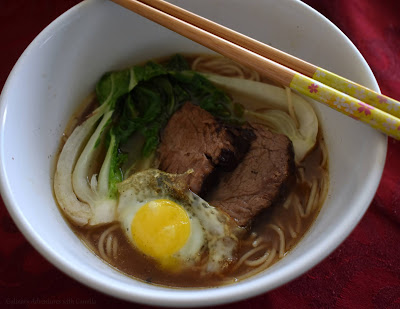 To serve, add noodles to individual serving bowls. Top with sliced beef, bok choy, and egg. Ladle in the broth and serve immediately.