By Camilla M. Mann February 15, 2021
This is a sponsored post written by me on behalf of Dineen Vineyards.
Complimentary wine was provided for this post and this page may contain affiliate links.
However, all opinions expressed here are my own. 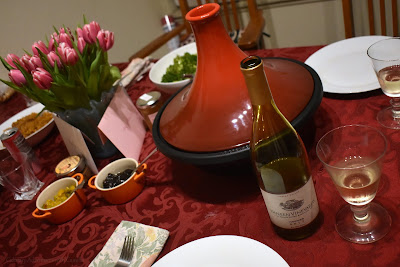 Next month the Wine Pairing Weekend bloggers are working with different wineries to showcase the wines of Washington state's Yakima Valley. And I received a selection of wines from Dineen Vineyards,* including their 2017 Viognier.

I was able to spend some time on a Zoom call with Marissa Dineen, Owner, and Amanda Conley-Bagge, Dineen Vineyards' Tasting Room Manager. With the on-going pandemic and shelter-in-place orders, this seems to be a way we are all connecting. Obviously it's not the same as tasting wine with them in person, but it was so informative and so much fun. When Jake and I make it to the Yakima Valley, I will be stopping there for sure! I will share more information about the vineyards for the #WinePW event. For now, I'm focusing on the wine and my pairing. 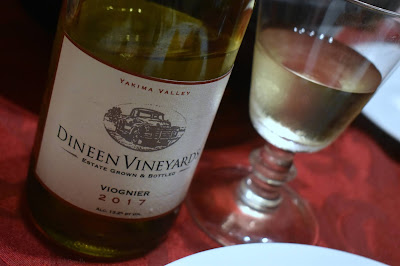 This 2017 single varietal wine is 100% Viognier that spent almost two years in neutral French oak. I learned that 2017 had a particularly cold winter so the crop yields were lower than the 2015 and 2016 vintages. With delayed ripening, the resulting wines were more concentrated. And for what is an already full-bodied wine, this Viognier felt like a perfect white wine for a dedicated red wine drinker! 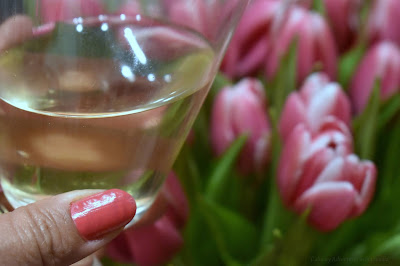 I had asked Marissa and Amanda if their Viognier was a traditional expression of the grape which, to me, is usually heavily perfumed with florals. But they both noted yeasty and citrus aromas and flavors in addition to the expected jasmine and stone fruits. I was instantly intrigued. 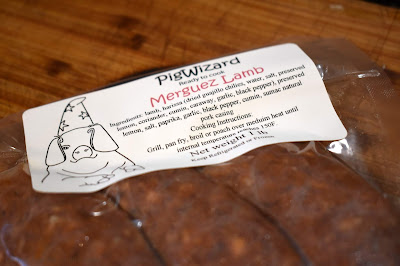 That got me thinking about a dish that had some complex spices along with some sweetness and some citrus.  I landed on a Moroccan-inspired tagine with lamb merguez sausages, dried apricots, and some fresh blood oranges.
Whenever I see the word 'Merguez' in a recipe or on a menu, my little foodie heart always skips a beat. I love those distinctive North African spices and am lucky to have a favorite local purveyor who makes Merguez lamb sausages. Thankfully, PigWizard is still open during these trying times of being sheltered in place. I placed the order online and ran over to pick this up. I also had organic onions, celery, and carrots from a local farm delivery. Cooking during this COVID-19 pandemic is a little challenging at times, but I try to keep it interesting while being safe at home.

And I make my tagine on the stove instead of in the oven...that darn pot doesn't fit in my oven! 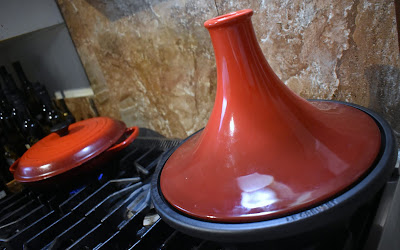 About the pot: a tagine. A tajine or tagine is a Maghrebi dish named after the earthenware pot in which it is cooked. So, it refers to both the cooking vessel and the resulting food; it is also called a maraq/marqa in North Africa and the Middle East.
Mentions of the tagine date back to Harun al-Rashid who was a ruler of the Early Muslim conquests and it appears in the 9th century collection of stories One Thousand and One Nights. At the same time, it was noted during the Islamic reign of the Abbasid Empire that stretched from the Middle East/Asia to North Africa and Andalusia.
The dish was used by nomadic Bedouin people of the Arabian Peninsula, who added dried fruits such as dates, apricots and plums to it. Tagine is traditionally cooked over hot charcoal with the shape of the lid acting as a self-basting tool. The circular base is flat with low sides and the cover is a large cone-shape that sits on the base during cooking. The cover is designed to collect all condensation and re-direct to back to the bottom.
If you don't have a tagine, don't despair. This recipe works just as well in a Dutch oven or other heavy lidded pot.
Ingredients serves 6 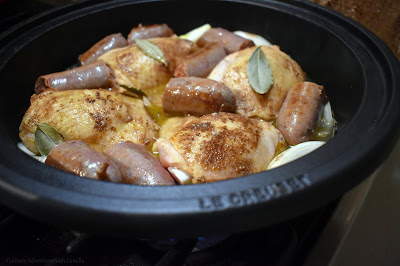 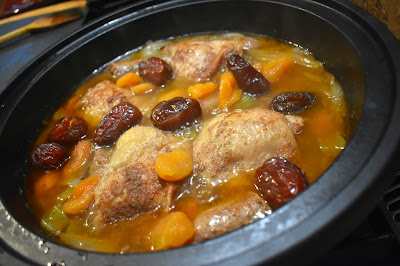 Sprinkle your chicken with salt and pepper on both sides. Heat olive oil in the bottom of your tagine or Dutch oven. 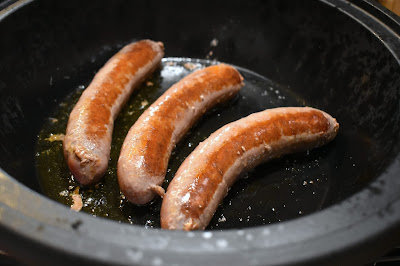 Nestle the chicken and sausage into the vegetables and add in the garlic and ginger. Sprinkle with the cinnamon, cumin, coriander, paprika, and orange zest. Add  in your bay leaves. Pour in the chicken stock, wine, and orange juice. Bring to a boil. Then cover and reduce to a simmer. Cook for 1 hour. 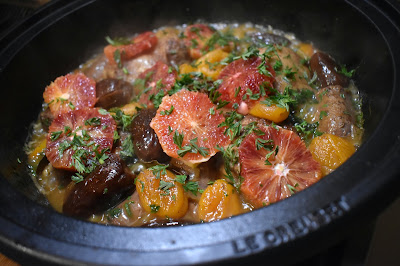 After the 90 minutes of cooking, add orange slices to the top and scatter with herbs. Bring the heat up to reduce the sauce slightly. Make sure to stir so that nothing is burning on the bottom. Once it's at your desired thickness, let stand for 10 minutes before serving. 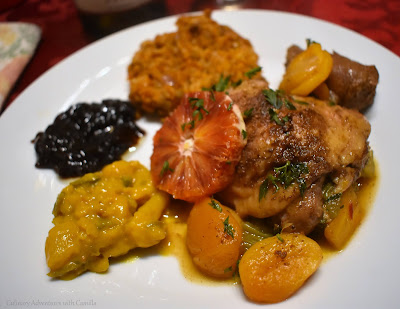 I served this with a spiced rice and lentil dish along with two different chutneys.

Find Dineen Vineyards on the web, on Facebook, on Instagram
*Disclosure: I received compensation in the form of wine samples for recipe development and generating social media traction. My opinions do not necessarily reflect the opinions of the sponsor.