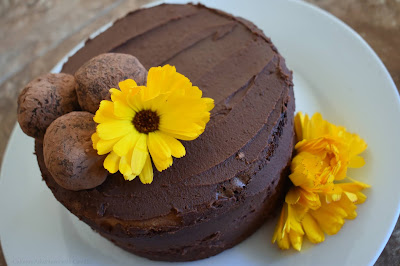 I bought The Italian Villa by Daniela Sacerdoti* because, well, I will read just about anything set in Italy, though I do prefer the Italian title of the book better: I Segreti della Villa in Collina - The Secrets of the House in the Hills. Had I seen that version, I probably would have bought it...and just muddled my way through with my very, very rusty Italian! But, as it was, I was  able to breeze through this novel in a couple of hours. What a great way to start my Sunday morning! 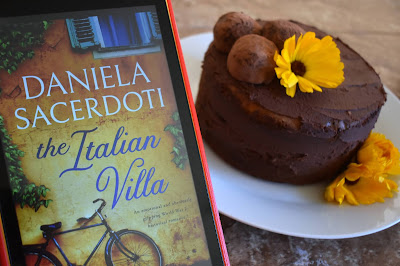 You have to suspend more than a little disbelief to get to the main story. Briefly, Callie DiGiacomo, who lives in San Antonio, Texas was orphaned at 10-years-old and went into the foster care system. On her twenty-first birthday, her former case worker summons her and gives her a letter from an attorney. Long story short: the couple she believed were her parents were actually her adoptive parents; she now knows the name of her birth mother, Malva Stella; and she has inherited a villa, Casa delle Lucciole (House of the Fireflies) in Italy. So, Callie leaves Texas and finds herself in the (made-up) village of Montevino.
Throughout the course of the novel, Callie reads the diary she found in her new home. Elisa, a trained doctor, is separated from her husband Leo during the German occupation of WWII and survives the Montevino  massacre that mirrored the actual events of the 1944 Sant'Anna di Stazzema massacre. And with the help of the diary and the gossip of the townspeople, Callie is trying to piece together her family history...and to figure out how she's related to Elisa and Leo and why she was left with the deed to Casa delle Lucciole.
The village nonne are constantly trying to feed Callie. "'And eat something,' Nonna said slowly and deliberately, making me smile. Out of the corner of my eye I’d seen some pretty amazing-looking plates of pasta on the tables. 'I make it all myself, you know?' she told me proudly, catching me looking at the food. 'I make pasta almost every day, and I’m—' 'Eighty-two!' Nonna and Adriana said together, the younger woman smiling at me. 'Enough about pasta, Nonna'" (pg. 48).
There's a budding romance between Callie and a young, mysterious gamekeeper named Tommaso. He tells her, "'All Italian nonnas are instant grannies,' Tommaso joked. He couldn’t see or guess the emotion I felt, and I could never have put it into words – not with a stranger, not with anyone. 'How about some bread and honey? The honey is from bees I keep here. It’ll build you up a little.' “'hank you. You’re very kind,' I said. At this point, exhaustion and the heat of the fire were beginning to creep in and my eyes were closing. I imagined giving Kirsten the lowdown on my day. Yes, I found the house. It’s actually a villa, but there’s a storm so I’m waiting it out in a gamekeeper’s cottage, and this mysterious Italian guy who looks after the castle is making me bread and honey" (pg. 58).
And, it turns out, Callie does have a living relative, the eccentric Flora Stella, the village naturopath. I won't spoil the story, but when Callie asks about her name, Flora tells her that she was named Callie after the calendula flower. "'Why Callie? It doesn't sound very Italian.' 'Calendula.' Flora smiled. 'Passiflora is the flower of passion, and it can be poisonous. But calendula is the healing flower. That's you, Callie'" (pg. 250).
The story isn't particular realistic. But, hey, it's a novel. There's some history. There's some romance. There's family drama. And I thoroughly enjoyed the cast of characters, the food, and setting.
On the Plate 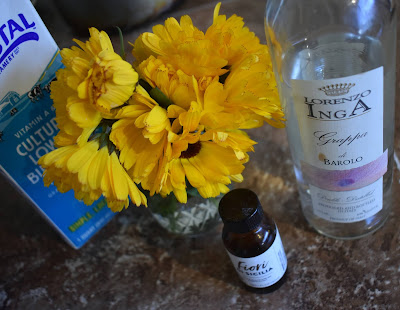 Though there was a lot of food and drinks mentioned in the book - including focaccia, chinotto, gianduja, and tons of homemade pasta - a few different passages collided in my mind to create this cake. First, there's the century cake they always have at Leone's in the village; second, she attended the chocolate festival in town; and third, Tommaso makes Barolo wine from the few vines he cultivates. So, when I realized that those were calendula flowers in my CSA box from Robina's Organics...and the bottle of grappa on my shelf was a Barolo grappa, I almost shrieked, "Serendipity!"
About Barolo...it's one of my favorites and I'm sure I visibly cringed when Callie admits, "'Anyway, I only drink white wine.' Tommaso’s eyes danced. 'My Barolo will make you change your mind. I promise.' 'What’s Barolo?' 'Deep, lush, supple red wine. You’ll be amazed. Promise. Come,' he said, and turned away into the late summer morning. The crickets’ song had just begun, and the temperature was beginning to rise. 'Supple? How can a wine be supple?' I asked, throwing my jacket on and following him outside" (pg. 128).
Note: You will want to make the ganache first so that it has time to chill sufficiently.
Ingredients makes two 6-inch cakes 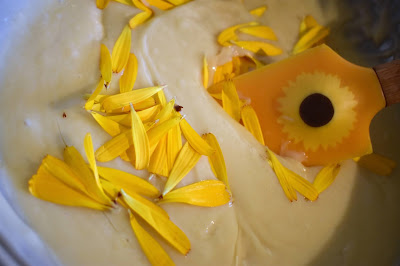 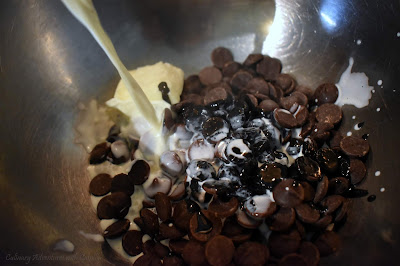 Ganache
Place chocolate in a large mixing bowl. In a medium saucepan, heat cream to steaming. Pour cream over the chocolate.  Let sit for three minutes, then whisk until smooth. Whisk in the grappa, then refrigerate until firm. I placed mine in the freezer to help it firm faster; it took about an hour. I rolled three ganache balls into truffles for garnish and then whipped the rest into a frosting consistency.
Cake
Preheat oven to 350 degrees Fahrenheit. Line the bottom of the cake pans with parchment paper and butter the sides of the dish.
In a medium mixing bowl blend together the flour, sugar, and baking powder. In a large mixing bowl, whisk together the olive oil, buttermilk, eggs, and extract. Gently fold in the flour mixture until everything is just moistened. Incorporate the petals into the batter and divide between the two prepared baking pans. Place the pans on a baking sheet and place in the oven. Bake until the cake is browned, rise, and bounces back when you press on the top lightly, approximately 30 to 35 minutes.
Place the pans on a wire rack and let cool for 5 minutes. After 5 minutes, invert the pans onto a wire rack, remove the parchment paper, and let cool completely.
Assemble
Slice the cake layers so they sit flat. Place one cake round on a serving platter and spoon about 1/2 cup of ganache onto the cake layer and spread it to the edge of the cake. Place the second cake layer on top. Frost the top and sides with the whipped ganache.
Garnish the cake with rolled truffles and calendula flowers. Serve with Italian coffee because "'Oh, bene, bene, so you’ll have coffee then.' Of course. Another Italian thing: you cannot refuse coffee" (pg. 74).
*This blog currently has a partnership with Amazon.com in their affiliate program, which gives me a small percentage of sales if you buy a product through a link on my blog. It doesn't cost you anything more. If you are uncomfortable with this, feel free to go directly to Amazon.com and search for the item of your choice.
Click to see what everyone else read in February 2021: here.