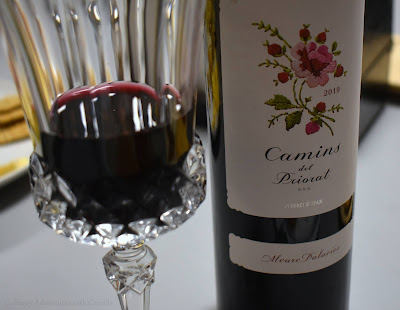 This year a fourth wine blogging group was formed by Jeff of Food Wine Click! and we will be doing a deep dive into the wines of Spain in 2021. January had us looking at Rioja; you can read my article - with the links to everyone else - here. And this month, Susannah of Avvinare is hosting as we head to Catalunya.
All of these posts will be live by Saturday, February 27th when we'll be meeting for a live Twitter chat at 8am Pacific. Follow along with the hashtag  #WorldWineTravel and be sure to add that to any tweets you posts so we can see them. Here's the #WorldWineTravel Catalunya line-up... 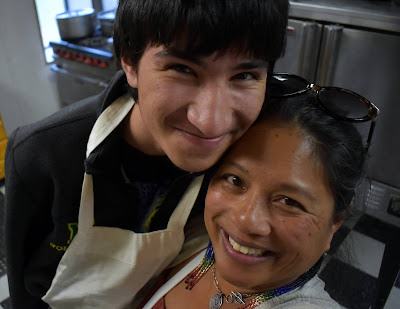 As we are approaching a year of living in this pandemic, we haven't traveled much at all. One brief exception was when we went to visit my in-laws during Fall Break last October. It was a welcome respite from being sheltered-in-place and I celebrated by cooking dinners for the family every night. It was a nice way to spend time with my younger Kitchen Elf and my niece who is the same age. We cranked up the music or just chatted while we prepped and prepared dinner for about a dozen people everyday. It's always a treat to have the run of a commercial kitchen, right?
And being the serial planner that I am, I carried up a bunch of wines and knocked out pairings for several of my wine groups. So, one evening, we took a virtual trip to Catalunya and I served Pollo a la Catalana + Alvaro Palacios Camins del Priorat 2019.
Catalunya 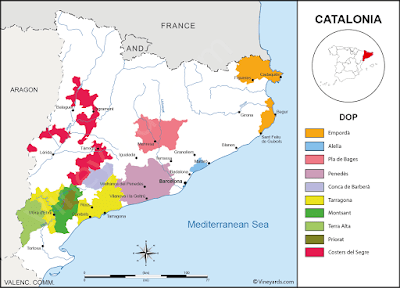 map from vineyards.com
Catalunya is a Spanish Denominación de Origen Protegida (DOP) for Catalan wine that was formed and recognized in 2001. Its purpose: support over two hundred wineries (bodegas) that were not included in other specific DOPs in Catalonia. Interestingly enough it isn't tied to a specific geographical location but instead is comprised of nearly 20 square miles of individual vineyards from all over Catalonia. Catalunya does allow winemakers to mix in grapes from other DOPs.
The bottle that I tracked down for this event was the 2019 Alvaro Palacios Camins del Priorat. Priorat is a tiny wine-producing region that is comprised almost completely of craggy, terraced vineyards. Until the early 1990s it was virtually abandoned. Then René Barbier arrived and set about revitalizing the region. With a base in the village of Gratallops, they aimed to revive the ancient vines and cultivate some new French grape varieties.
Because the new vines were well-recognized - think Syrah, Cabernet Sauvignon, and Merlot - and the quality of the wines they were producing was high, Priorat is enjoying a renaissance. By the turn of the millennium, the area's vineyards had already doubled.
In the Glass 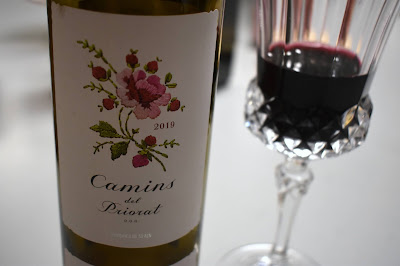 In 2015 Alvaro Palacios was named 'Man of the Year' by Decanter magazine. Though Palacios descends from the Rioja's Palacios Remondo family, he left Spain in his early 20s to work and study winemaking elsewhere, namely Bordeaux. But he returned to Spain and was drawn to highlighting traditional grape varieties such as Garnacha and Cariñena.
This wine is a blend comprised of 35% Garnacha, 24% Syrah, 17% Cabernet Sauvignon, 11% Cariñena, 10% Merlot, and 3% other varieties. The grapes were destemmed and lightly crushed before being fermented in a combination of stainless steel, oak, and concrete tanks. After fermentation, the wine was left to mature in oak barrels for another four months.
The wine poured an inky purple. To the nose, aromas were savory with hints of fennel and balsamic. And on the palate those aromas were mirrored with more licorice and spice. This wine was intense but approachable and elegant.
On the Plate 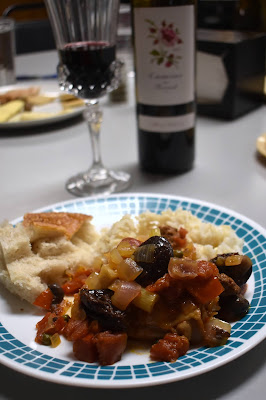 For these #WorldWineTravel events I am going to try to post pairings with food that hails from the same region, or at least inspired from the region. You have probably heard the adage: what grows together, goes together. Pollo a la Catalana, Catalan-style chicken, is a warming dish that's great in the Fall. Chicken is browned, then braised in a sauce of onions, tomatoes, and wine with prunes and raisins. It's so delicious.
I did add in some ground Spanish chorizo from local-to-me PigWizard for even more flavor, but that is not traditional. And the photos - large pots and trays - were for fifteen or sixteen people. The recipe and quantities below serve six.
Ingredients serves 6 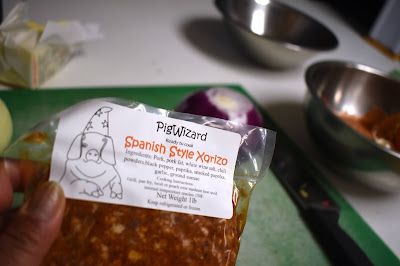 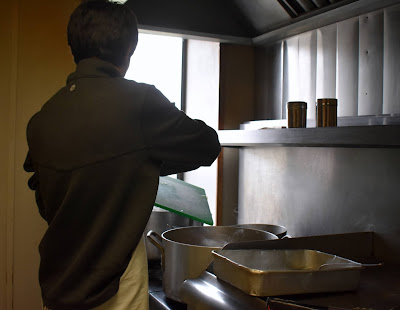 Place prunes and raisins in a bowl and cover with warm water. Let soak for at least 2 hours. Drain and set aside. 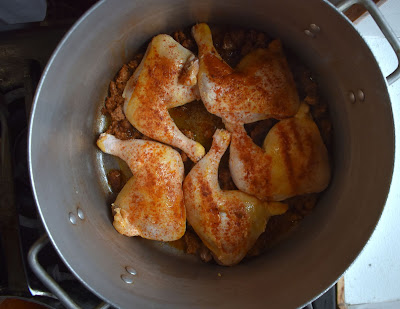 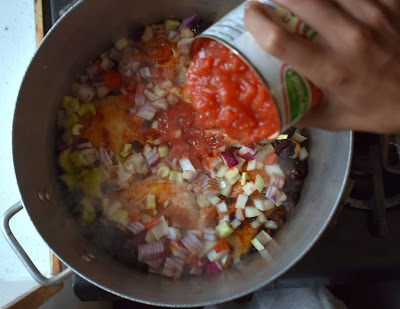 Add in the onions, celery, diced tomatoes. Pour in the chicken stock and wine. 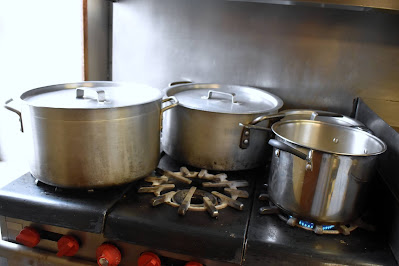 Bring liquid to a boil, then cover and reduce heat to a simmer. Let chicken braise for 60 minutes. Sir in the almonds and the soaked fruit. Let simmer for another 15 minutes. Remove chicken from the pot and place the pieces on a serving platter or tray. Bring the sauce to a rolling boil and cook until thickened to your desired consistency. Season to taste with salt and pepper, as needed. 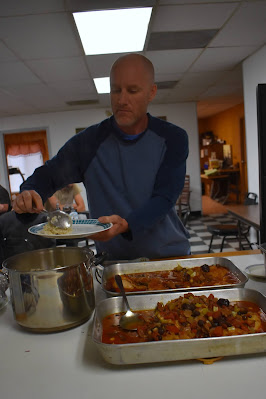 To serve, place chicken on individual serving plates and spoon thickened sauce over the top. 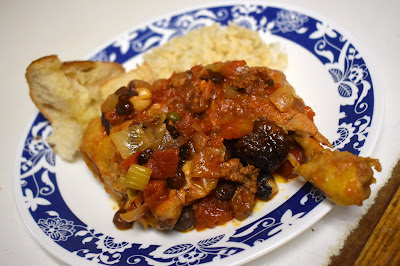 Serve with rice or bread on the side.
That's a wrap for our virtual trip to Catalunya with the #WorldWineTravel group. We'll be back next month with an exploration of wines of Castilla y Leon with Allison of Advinetures leading the discussion. Stay tuned....