By Camilla M. Mann December 28, 2015
Do you get chocolate in your stocking? When I found the Single Origin Chocolate Taster Kit at Mouth, I knew someone who would love it. Whether he'd share it, or not, was undetermined. But he did, in fact, decide to share. So, last night, after dinner, he unwrapped the chocolates and we tasted, savored, and commented. 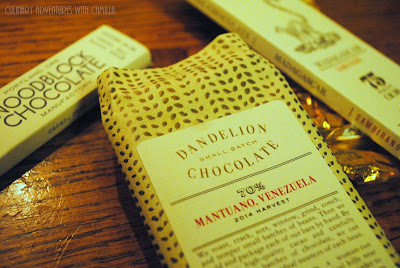 Just a quick note about "single origin chocolate." The term is pretty self-explanatory and it's a simple idea. Single. Origin. It’s chocolate produced from one variety of cacao that's harvested in one region.

Think about terroir in wine. Same idea. Cacao, like grapes, is a plant whose flavor profiles are affected by the characteristics of the soil, the climate, and more. And, just like wine, many terms used to describe single-origin chocolate will be familiar to wine lovers. Think earthy, floral, herbal and berry.

What we tried...
Ritual Chocolate's Madagascar Bar. It's a 75% cacao, harvested in 2014. This was from the batch number one! Made with organic cacao from lower Sambirano Valley in Northern Madagascar, the chocolate boasted some tart berry notes. Jake declared it his favorite. And, after sharing a tiny bite with each of us, the bar was squirreled away never to be seen again. Well, it was in his stocking.

Woodblock Chocolate's Trinidad Bar. It's a 70% cacao bar from the birthplace of the Trinitario cacao. This was the least flavorful of all the ones we tried, but R declared it his favorite. But, then again, the kid likes uncomplicated flavors. 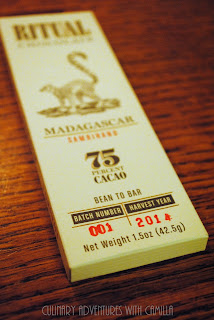 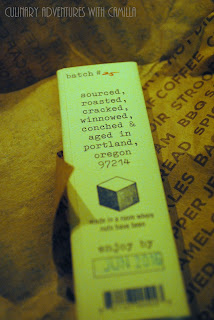 Cacao Prieto's  Dominican Cacao is hand crafted from 72% organic Dominican Criollo cacao. The producers say they can date the genetics of their cacao back to Christopher Columbus. While it tasted fantastic, the more notable things we all gushed about: the texture. It was the smoothest chocolate we have ever tried. Oddly smooth. 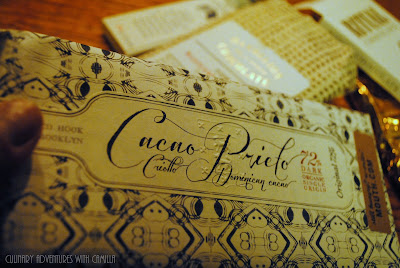 French Broad Chocolate's Belize Bar was incredibly flavorful. The tasting notes read: vanilla and pineapple; I called it 'honeysuckle'. But, like wine, everyone's impressions are dependent on their previous taste experiences. Still, it was flavorful, aromatic, and distinctly floral. D actually like this one the best.

Dandelion Chocolate's offering was a 70% Mantuano from Venezuela. This was - bar none! - my favorite. The Enthusiastic Kitchen Elf and I tasted mace with a slight bitterness of coffee. Yes, I was in love...and happily tucked the rest of the bar away for future nibbles.

What a great curated collection from Mouth! I will be seeking out more of these bars soon.