By Camilla M. Mann December 28, 2015
The Enthusiastic Kitchen Elf requested Moules Frites for his birthday dinner. It ended up being a day late as we were stuck in traffic coming back from San Francisco. But, we did it and D was happy. After dinner he also got his wish of a birthday Bûche de Noël. 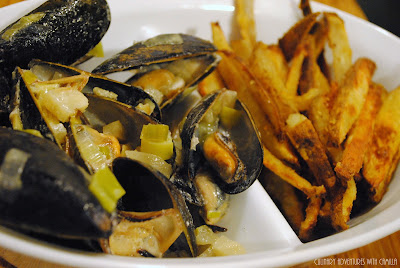 Procedure
Place the cream in a small sauce pan and stir in the fennel pollen. Warm the cream until bubbles form around the edges of the pan, but do not bring it to a simmer. Remove the pan from the heat and let come to room temperature while the flavor of the fennel pollen infuses into the cream.

Place 1/2 stick of butter and crushed juniper berries in a large, flat-bottom pan with a lid. Add a splash of olive oil to keep the butter from burning. Heat until the butter is completely melted and foamy. 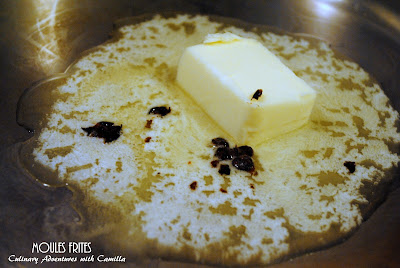 Add in the fennel slices and leeks. Cook until the fennel is softened and the leeks are beginning to caramelize. Deglaze the pan with the wine. Once the wine begins to simmer, place the mussels in a single layer in the pan and add the remaining butter. Cook for one to two minutes, then pour in the fennel-infused cream. Stir to combine, then cover and steam until the mussels open. Check them after five minutes. They are cooked and ready when the shells are completely open. 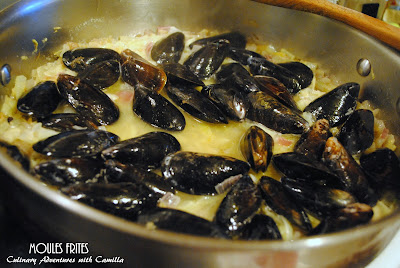 Remove the mussels to your serving platter. Turn up the heat on the sauce until it bubbles. Let it bubble until it thickens slightly. Season to taste with salt and pepper. Fold in the herbs. Pour the sauce over the mussels. Serve immediately. 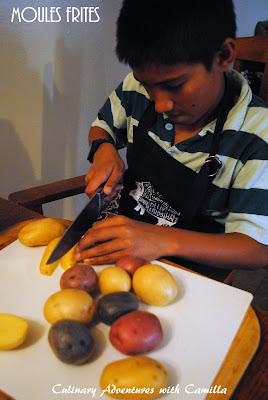 I'm not sure they are really 'frites' since they are baked, not fried. But we'll go with it since that's the name of the traditional dish. My Enthusiastic Kitchen Elf painstakingly sliced the potatoes by hand so that they were "the perfect fry size!"

Procedure
Preheat oven to 425 degrees F. In a large mixing bowl toss together the potatoes and fennel slices with olive oil to coat. Fold in salt and flour until well-coated. Place fries in a single layer on a parchment-lined baking sheet. Roast for 20 minutes. Turn fries over. Then roast for another 20 minutes. Frites are done when they are lightly browned and their outsides crisped.