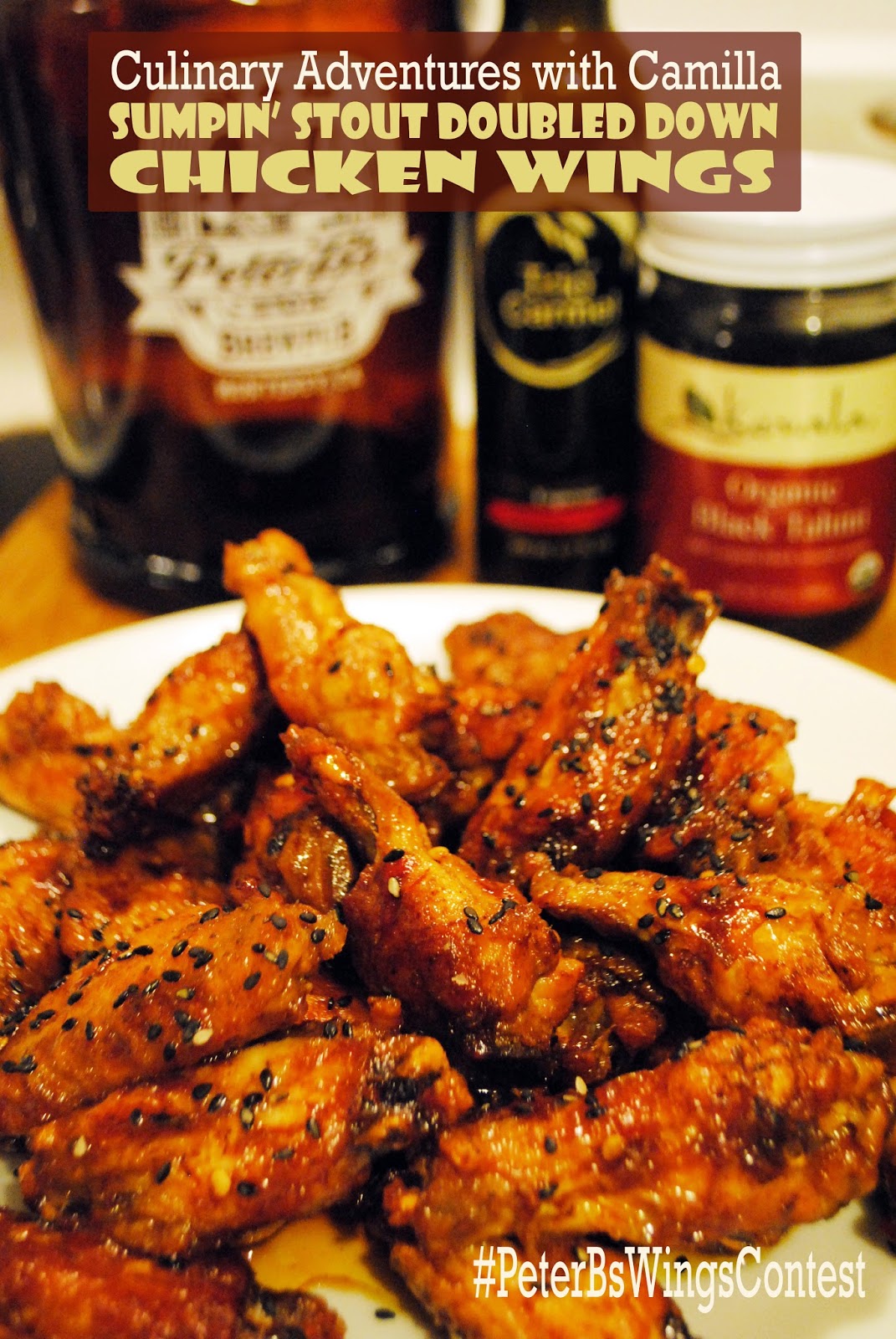 I don't know how I totally missed that Peter B's Brewpub was holding another recipe contest - its 1st annual Wing Sauce Competition. Details on their facebook page. 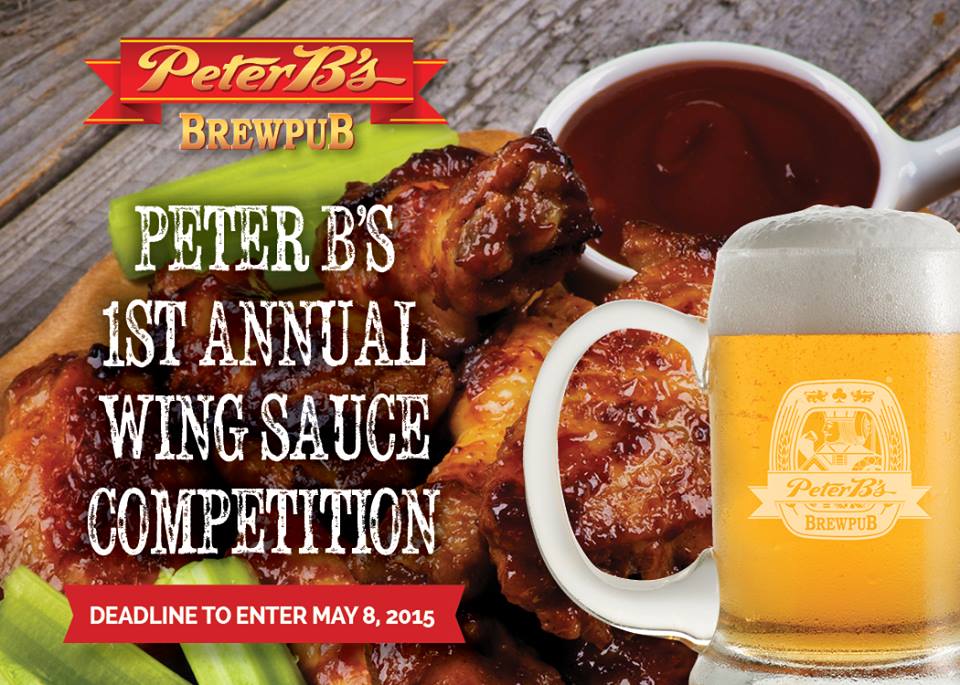 Thank goodness for friends who watch out for me! I am always up for some culinary adventure in the form of recipe development, especially a recipe that involves beer. Ummm...heck, yeah. Count me in.

I had never actually made chicken wings before January of this year, thinking that I had to fry them. And, well, I don't fry. But, after a blogging friend levied a challenge to come up with a great wings recipe, I experimented and mastered that crispy delicious goodness in the oven. No frying necessary.

For this recipe, I needed to include a Peter B's brew. I wanted to use a seasonal beer and tasted their Nitro Milk Stout. At least that's what the waitress called it. According to their facebook page, it's officially the Sumpin' English Maple Milk Stout. It's brewed with English ale yeast, maple and lactose sugar, and - thankfully for my non-bitter-beer loving husband - only clocks in at 26 IBUs. It's smooth and sweet; it was perfect for adding dimension to a complex layering of flavors in my wings sauce.

A quick note on the beer: when I went back to the brewpub two weeks later to recreate this dish, they were out of the milk stout, so I substituted their Stout Resistance instead. It was just as tasty! 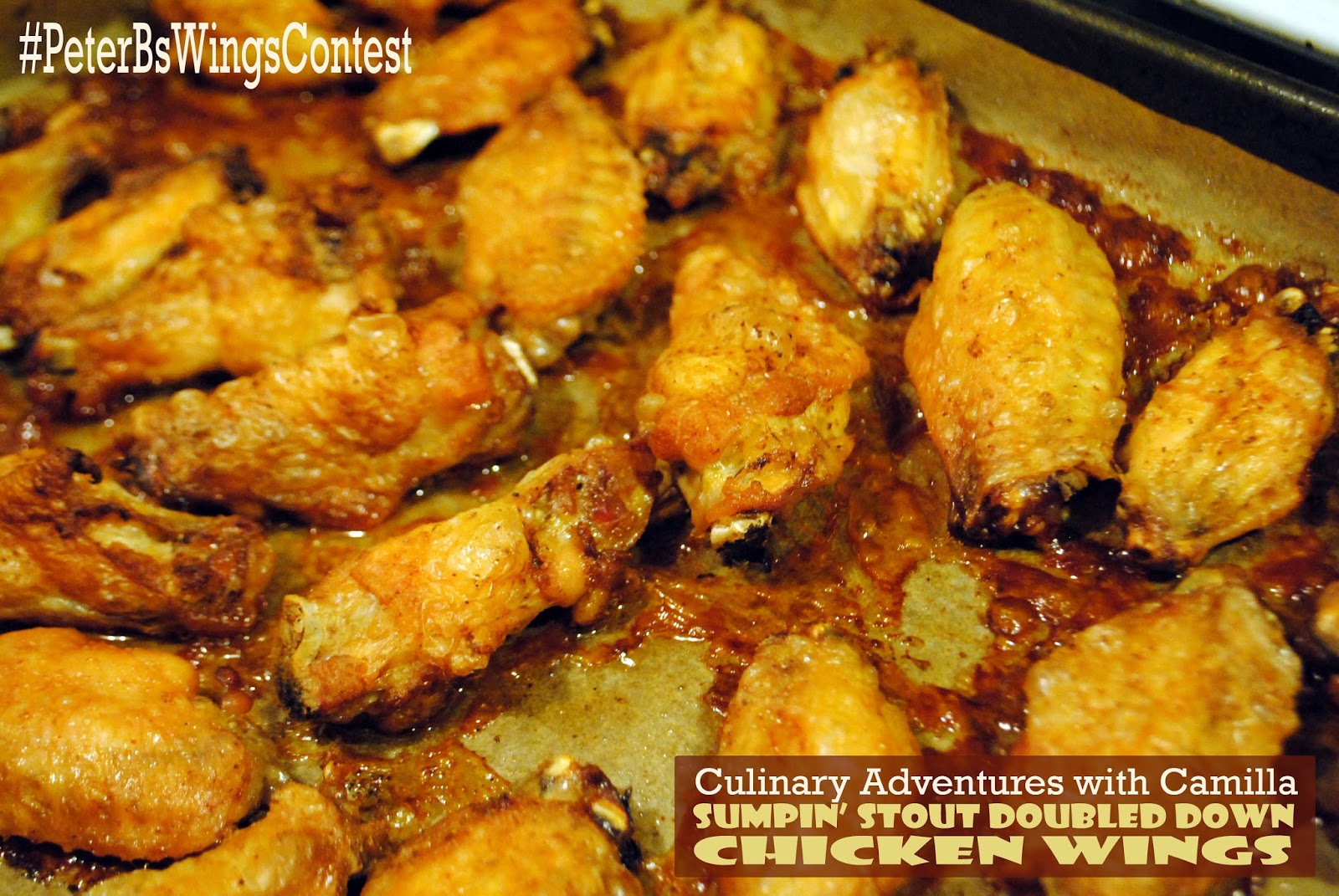 The boys wolfed these down. I guess they liked them. I am calling them 'doubled down' because the wings are soaked in the beer and there's a reduced beer syrup in my sauce. The beer syrup can be made ahead of time and will keep - in the fridge - for up to two weeks. And yes, I did pour the syrup over ice cream when I was finished!


Procedure
Beer Syrup
Pour the beer into a medium saucepan. Simmer over low heat until reduced by half. Take care not to let it boil. Add in sugar and hot sauce. Whisk to dissolve. Then continue to simmer over low heat until thickened, approximately 8 to 10 minutes. Allow to cool completely. Pour into a sterile jar or bottle and store in the fridge for up to two weeks.

Wings
Lay prepped wings in a rimmed dish where they can lay completely flat. Pour 1-1/2 to 2 C of beer over them and let soak for at least 20 minutes. Drain off beer and blot chicken wings dry with a paper towel.

In a large mixing bowl, toss the wings with oil and season with salt and pepper. Place wings - skin side up - on the prepared baking sheet. Roast them for 45 to 50 minutes. They will be cooked through and the skin nicely browned and crisped.

While the wings roast, whisk all of the remaining ingredients except the black sesame seeds together to create a hot sauce.

When the wings are done, add them to the sauce. and toss to coat. Garnish with the sesame seeds. Serve the wings hot alongside your cold beer! Cheers.