By Camilla M. Mann April 16, 2015
When BenBella Books invited me to join the first anniversary book tour for It's All Greek to Me -- Transform Your Health the Mediterranean Way with my Family's Century-Old Recipes from Debbie Matenopoulos, I was excited.

First, I love Greek food. Second, I loved the cookbook when I reviewed it back in November (click to read my post Souvlaki from Debbie Matenopoulos' "It's All Greek toMe" {#sponsor Book Review & Giveaway}).

Five months have gone by and that cookbook is still near the top of my cookbook stack. Now that's saying something. I have a lot of cookbooks. And, after I review a cookbook for a publisher, it often gets shelved and not pulled out until I remember something I wanted to try. But this one excels in inspiring me with its vibrant photography and easy-to-follow recipes. So, it has stayed in my to-read, or to-cook, stack right next to the couch where I read and plan my recipes. Today, I'm sharing Debbie's recipe for Dakos.

Dakos is a traditional Cretan mezze salad that takes what I would normally serve as a just salad and makes it hearty enough for a meal. In Crete, this salad is served on top of a barley rusk, called a paximadi. A rusk is just a twice-baked bread toasted to crisp. I had originally dug up a recipe to make my own paximadi, but I ran out of time. So, I opted for a nice crusty round from a local bakery. Also, I went for smaller, appetizer sized rolls instead of the larger traditional ones. Someday I'll make my own paximadi!

Matenopoulos notes: "choose very ripe, almost overly so, tomatoes so that their juice will really soak into the rusk beneath them. To make this vegan, just add another tomato and omit the feta." I opted for organic cherry tomatoes in red, orange, and yellow instead of larger tomatoes because the larger ones weren't quite ripe enough; also, I used only fresh herbs. 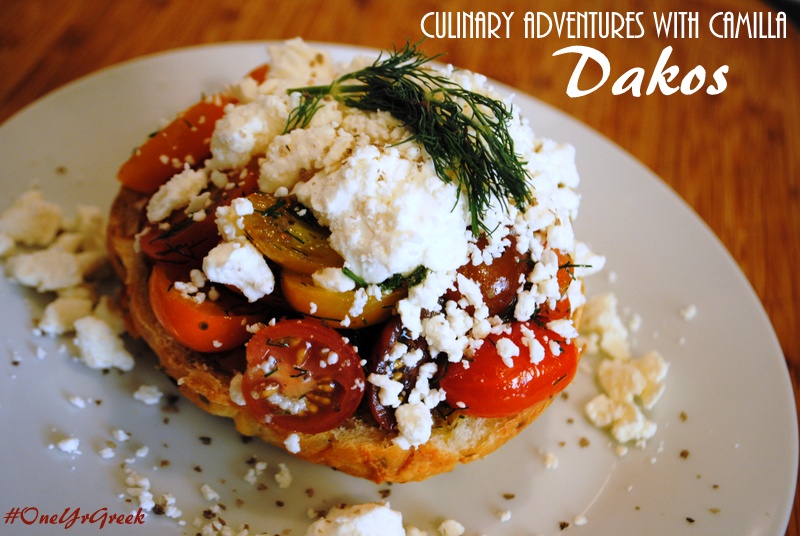 Procedure
Preheat oven to 400 degrees F. Lightly brush the cut side of the bread with olive oil and place on a baking stone. Toast until crisped and golden, approximately 8 to 10 minutes. Watch it carefully to make certain it doesn't burn.

In a mixing bowl, toss together the tomatoes and herbs with a splash of olive oil. Season with salt and pepper to taste. 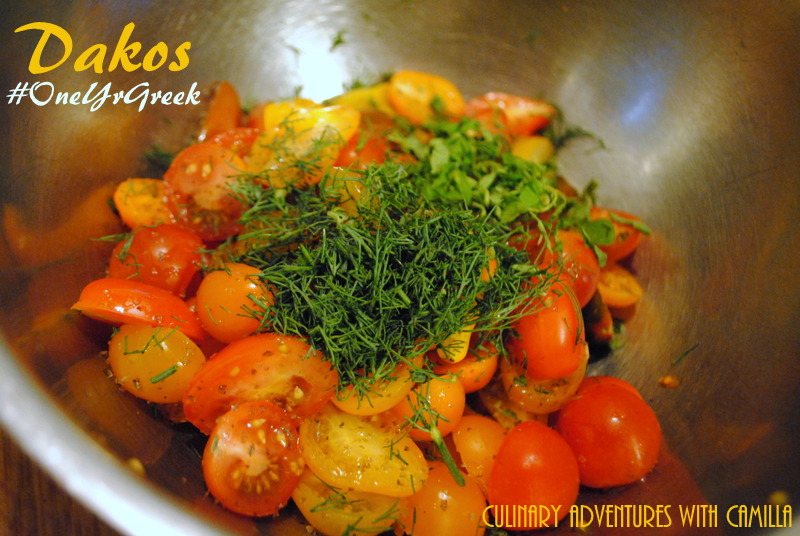 I thoroughly enjoyed cooking from It's All Greek to Me and am looking forward to trying my hand are more Greek recipes in the future. Now on to the part you've all be waiting for - the giveaway.

One of my lucky US readers - sorry, everyone else! - can enter to win a copy of It's All Greek to Me by Debbie Matenopoulos, courtesy of BenBella Books, Inc. Giveaway runs from today - April 16th - till April 27th at midnight, Pacific time. Please see terms and conditions in the rafflecopter widget below.

Disclosure: I received a complimentary copy of Debbie Matenopoulos’s It’s All Greek To Me Cookbook to review plus the opportunity to give a copy away. Opinions are my own. I received no further compensation for my post or review.