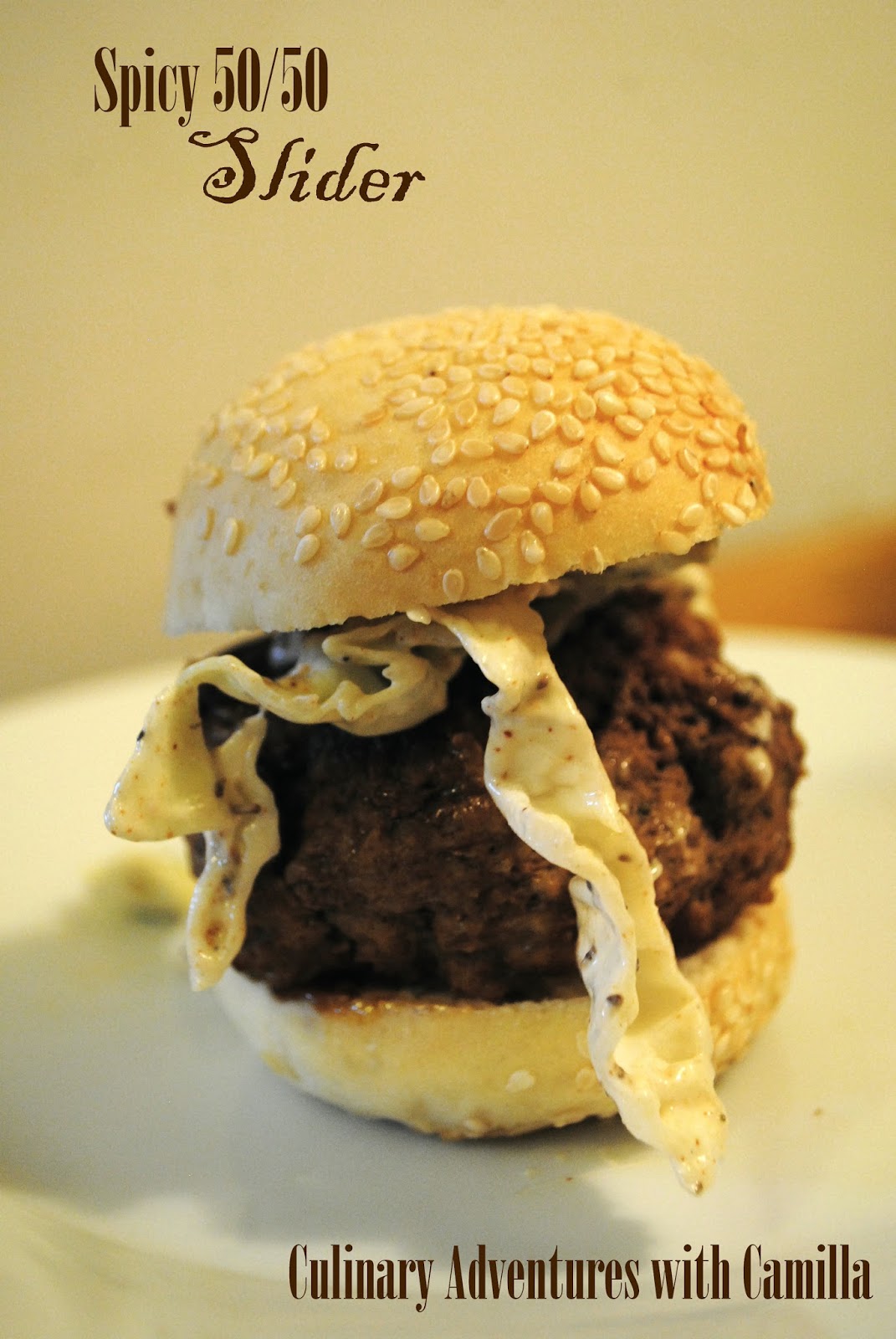 This month the Pass the Cookbook crew - under the leadership of Kita, the culinary force behind Pass the Sushi - is cooking from Julie's pick. Julie blogs at White Lights on Wednesday and chose a cookbook I've never heard of. So, I was excited to get cooking from it.

We had the option to cook his Angel Hair with Corn, Feta & Tomato, Grilled Salmon & Avocado Salad, or Spicy 50/50 Burger.

The 5 in 5 is an interesting concept albeit a little deceptive...in my opinion. Maybe it took me 5 minutes to blend the meat mixutre. It definitely took longer than 5 minutes to cook the patties; I don't like to undercook meat. So, while I like the 5 minute idea. It wasn't a reality. Still, the flavors were delicious and dinner on the table in less than 30 minutes is great!

I made a few changes: I used a lower fat percentage beef, swapped out for a soy chorizo, made a cilantro slaw, skipped the cheese, and shrunk them into sliders. We'll keep this on our rotation for the summer. Yum! 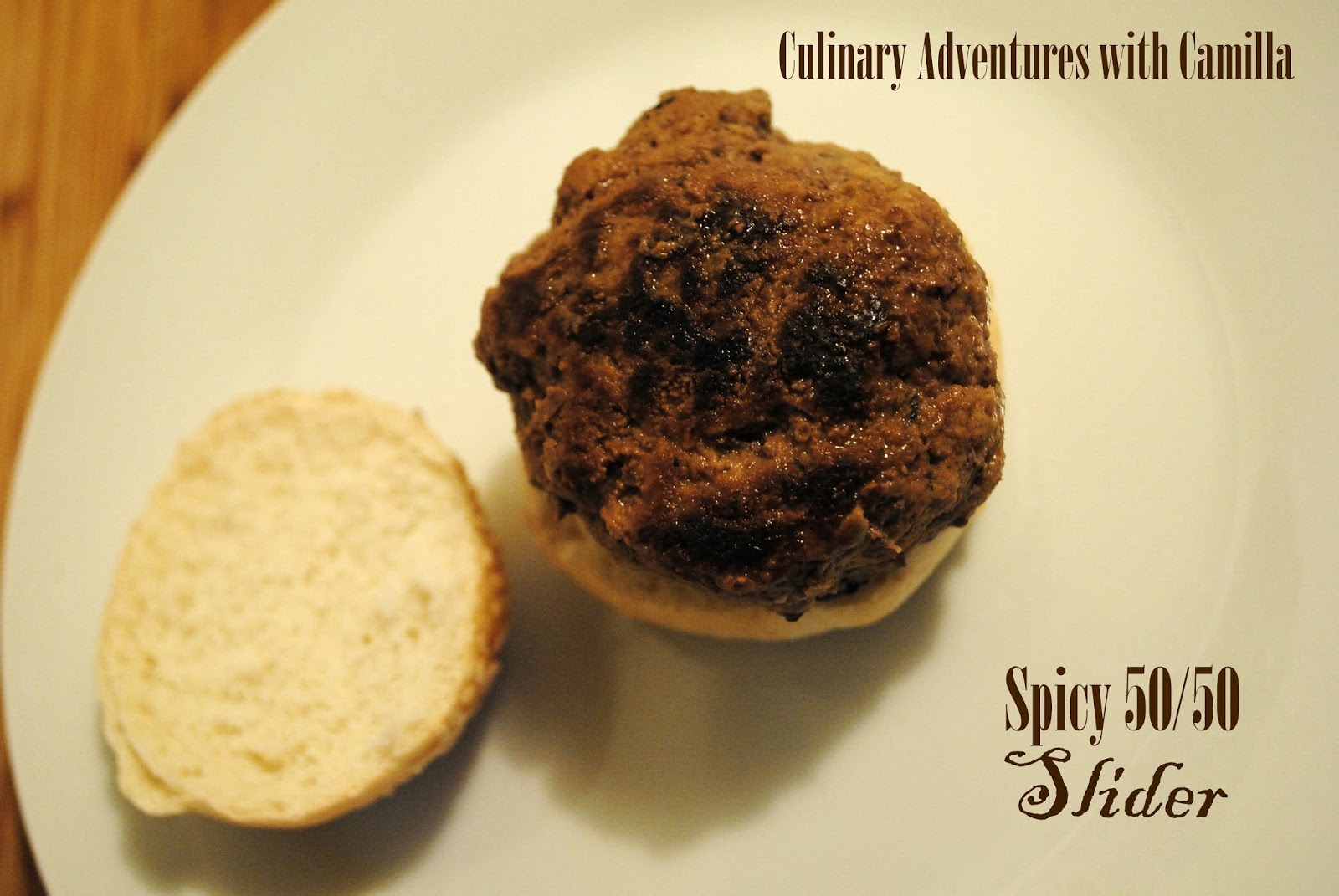 Adapted from Michael Symon's 5 in 5 cookbook

Procedure
For the cilantro slaw...In a large mixing bowl, place the cabbage and fresh thyme and cilantro leaves. In a smaller mixing bowl, whisk honey, mayonnaise, and vinegar together to form a smooth dressing. Toss the dressing into the salad. Chill for at least 30 minutes before serving. Garnish with more thyme and cilantro. 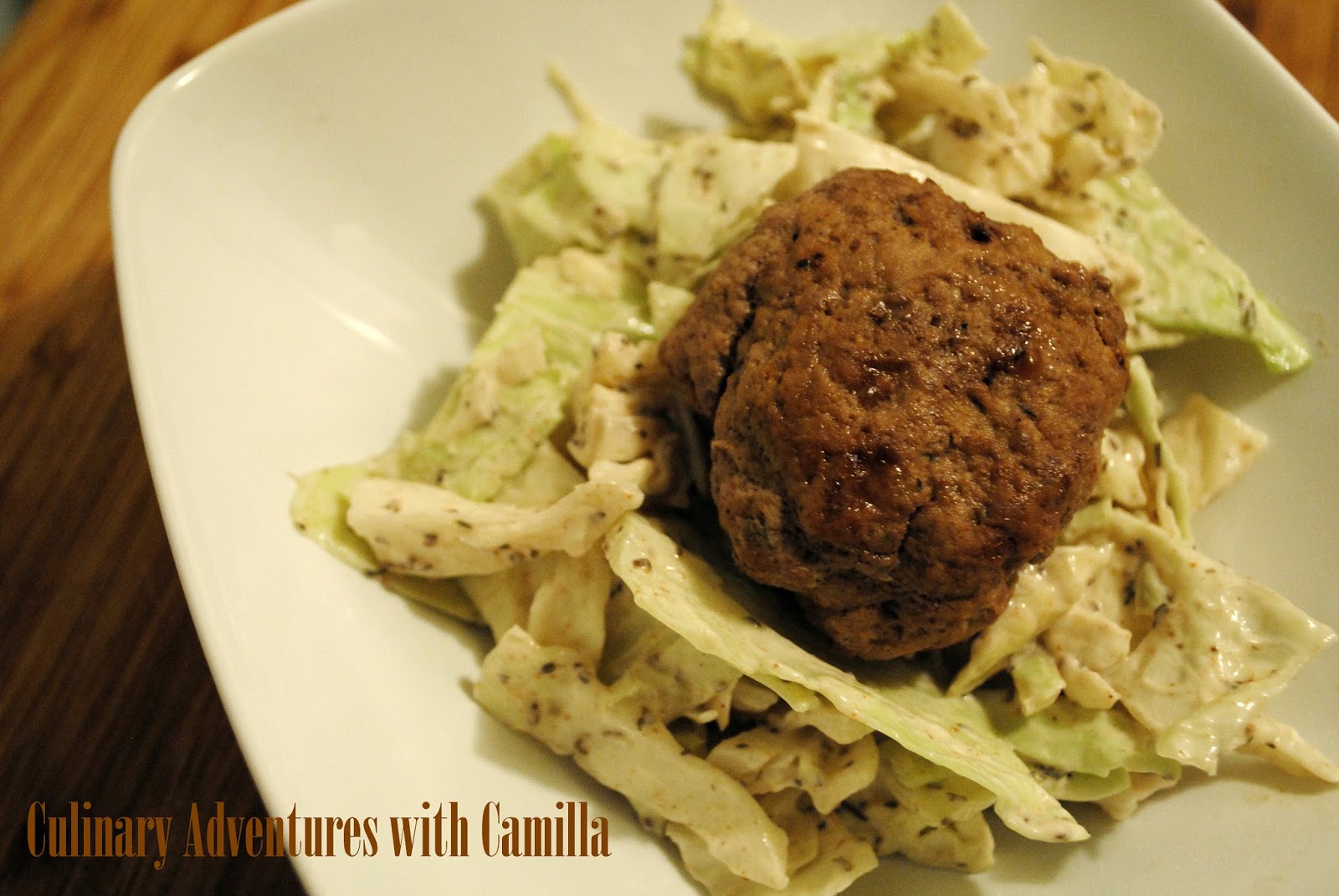 For the sliders...while a large, flat-bottom pan heads, in a bowl, mix to combine the ground beef and chorizo.  Form the meat into 8 slider patties, each about 1" thick.  Season the patties on both sides with salt and pepper.

Add the olive oil to the preheated pan, then add the sliders. Cook without moving until a good crust forms, about 4-5 minutes.  Flip the burger and cook until heavily caramelized, another 4-5 minutes.  Cover and let cook until the slider is fully cooked and firm to the touch.

Put 1 slider onto each bun bottom, top with slaw and the other half of the bun. Serve. I'm not big on bread, so I actually just ate my slider on a bed of slaw. Delish!

Here's what the rest of the crew made...