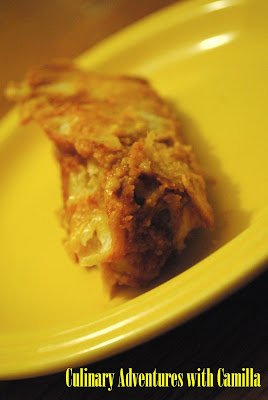 For our Dia de los Muertos dinner, I opened up the fridge and decided to make some enchiladas with the vegetables I had in there. So, here we go: pumpkin-potato-pepper enchiladas. Easy and filling! 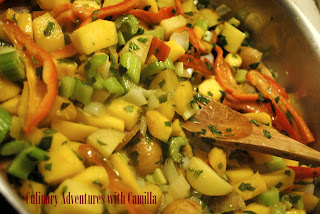 In a large flat-bottom pan, saute the onions and celery in olive oil until they begin to turn translucent. Add the pumpkins and potatoes and cook until fork tender. Fold in the peppers and cilantro. Season with salt and pepper to taste. Set aside. 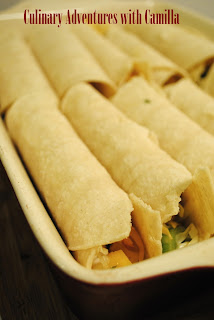 Mix all of the wet ingredients in a small saucepan. Whisk in the cornstarch until there are no more lumps. Bring to a simmer and cook until desired consistency. Set aside.

To assemble, lay two corn tortillas in a cutting board, or plate, overlapping at one edge - to make a "longer" wrapper. Lay shredded cheese, pumpkin mixture, and mozzarella pearls in the center of the two tortillas and roll them - as tightly as you can! - into a cylinder. Place it in your baking dish.

Roll as many as you can with the ingredients that you have. When you dish is packed, spoon sauce over the top. If the liquid doesn't reach halfway up the dish, fill it with water, or chicken broth. Cover the top with the rest of your cheese. Cover with foil.

Bake for 35-40 minutes - until the sauce is bubbling and the cheese is melted. Uncover and let cool for a few moments before serving. 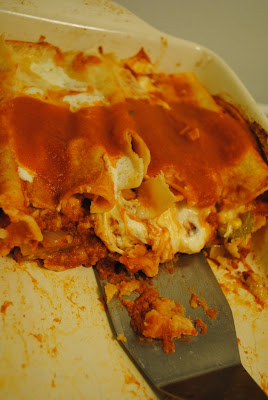