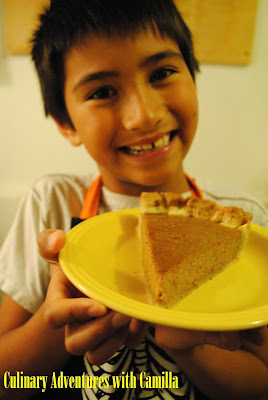 This morning when we were at the market, Riley asked if I would make a pumpkin pie today. I agreed. And he handed me a Japanese kabocha squash. Can you use this? Okay. I roasted it and made pumpkin puree. This afternoon I had the Enthusiastic Kitchen Elf help me.

Mix the flour, ground almonds, sugar and salt; rub in the butter until the mixture resembles coarse breadcrumbs. Stir in 1 teaspoon of water with a fork until the mixture forms a ball. Roll out between two pieces of parchment paper. Press gently into a pie pan. Chill in the freezer until ready to bake. 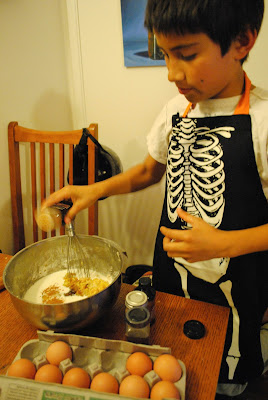 Just a note, Dylan is a spice fiend...and he doesn't measure. He just adds spices until it smells the way that he wants. So, I'm not going to hazard a guess as to what he used. Give it a try! 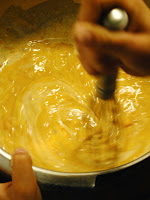 Whisk all of that together and place in the crust. Bake in a 350 degree oven for an hour or until the filling is set. It will be firm to the touch and the crust will be lightly browned.

Let it cool slightly before slicing. Serve with a dollop of unsweetened whipped cream.

We ate ours by (Halloween) candelight. 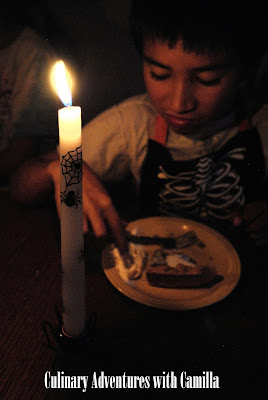