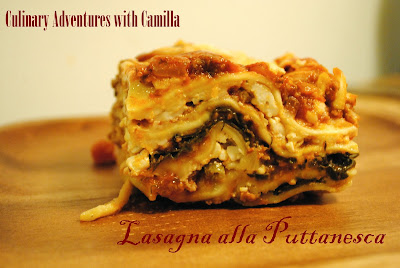 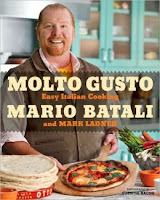 This month the Pass the Cookbook crew - under the leadership of Kita, the culinary force behind Pass the Sushi - is cooking from Mario Batali's Molto Gusto: Easy Italian Cooking.

As always, we had the choice of three recipes. Our choices: Broiled Pumpkin with Apples, Ricotta Copetta, and Penne alla Puttanesca. While the sound of all three made my mouth water, I opted to do a riff on the penne, whipping up a lasagna version of the dish. Given the history of the dish - I'll get to that in a moment - I could call this 'Ladies of the Evening Lasagna.'

Now to the history. I've heard a few different versions; the last one is the one I've heard the most...and the one I heard when I lived in Italy. Pick the explanation that you like the best! To begin puttana is Italian for prostitute. Whore. Slut. It's not a nice word.


One explanation of how the dish got its moniker claims that at the end of the evening's business, the prostitutes would beg for leftovers from local restaurants. If there was sauce on the stove, anything that might be spoiling would have been put into the sauce.

Another claims that the intense fragrance of this sauce is like a siren's call to the men - irresistible and delicious.

And the version that I've heard most often claims the sauce was created in brothel kitchens because prostitutes needed to make something speedy and nutritious between clients.  I read: "A lady of the evening could cook the sauce in the time it took her to take care of a client and enjoy it while recovering from her activities." Okay.


No matter which version you prefer, the sauce is usually served over pasta and typically contains a combination of tomatoes, onions, capers, black olives, and anchovies - all cooked together in olive oil. I used what I had, adding fennel and fresh red peppers...oh, and I added meat and spinach, too. It was delicious. 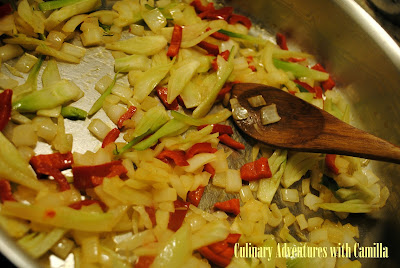 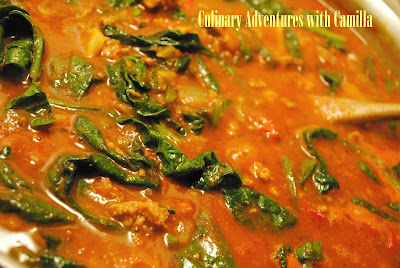 Put the anchovies in a small bowl and set it in the sink to soak for 20 minutes. Drain and pat dry. Coarsely chop.

Meanwhile, combine the oil, leek, fennel, red peppers, and anchovies in large, flat-bottom pan and cook over medium heat, stirring, until fennel is lightly browned and the anchovies have broken down, about 5 minutes. Add the ground beef and cook through. Stir in the tomato sauce and red pepper flakes and cook, stirring, until fragrant, about 3 minutes. Remove from heat. Stir in the spinach, parsley, olives, and capers. Stir till the spinach is wilted.

In a large baking dish, layer: sauce, pasta, cheeses. Sauce, pasta, cheeses. Repeat until your dish is full or you're out of ingredients. Cover with foil. Preheat your oven to 350 degrees. Bake for an hour - or until the sauce is bubbling and the cheese is melted. Uncover and cook for an additional 10 minutes.