Chad: Cooking Around the World

Somehow life has gotten in the way of my tabletop cooking, but this week, I am determined to whittle away at our list...and get back to cooking with a purpose. So, tonight we traveled to Chad with a simple dinner - perfect for a Monday night!

Chad is a landlocked nation in north central Africa, consisting of fertile lowlands in the south, arid lands in the center, and largely desert in the north. One of Africa's poorest countries, Chad's economy has gotten a boost from the beginning of large-scale oil production. 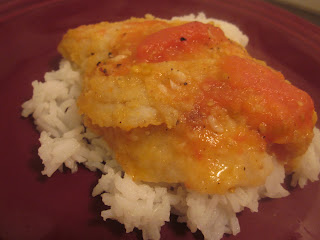 I found a traditional recipe from Chad for garlic-studded fish in a simple tomato sauce. I stayed true to the flavors but changed the process a little bit.

Rub the fish filets with garlic and heat the oil in a large flat-bottomed pan. Dredge the fish in flour and quickly brown the filets in oil. Remove the fish, keeping them warm in the oven. Place the halved tomatoes, cut side down, and cook until they have dissolved into a sauce. Place the fish on top of the sauce, cover, and simmer till cooked through. Season with salt and pepper. Serve over rice. 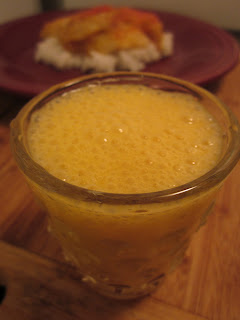 To wash down the fish, I created my version of Jus de Fruit. I skipped the ice and sugar, but whipped the juice to create a nice froth.

Place all the ingredients in a mixing bowl and whisk to a froth.

This Knight of the Global Table Adventure is signing off for now. We're moving through the 'C's now. Stay tuned for Chile.