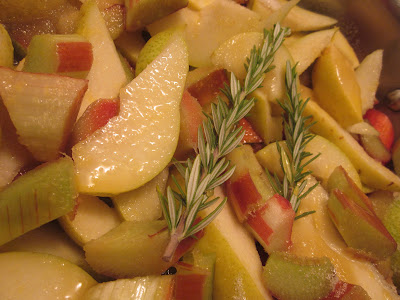 When my boys and I discovered Serendipity Saucy Spreads, local jam mistresses from Santa Cruz, Dylan's favorite was their comice pear & rosemary conserve. What a great combination of flavors! I wanted to add some of my precious rhubarb to the mix. The rhubarb ended up dissolving into a sauce while the pears stayed chunky. So, it wasn't exactly as I had envisioned it would look; but the taste is exactly what I wanted. I started with Serendipity's recipe and went from there. 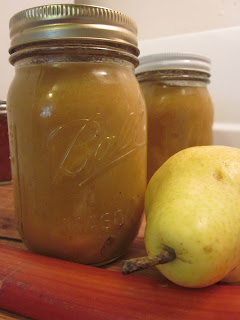 In a small to medium stock pot over medium heat combine pears, rhubarb, orange juice, spices, sugar and honey. Mix well and cook for approximately 10-15 minutes, until the pears begin to soften and caramelize.

Add a cup of water and the rosemary to pot, bring the pears to a soft boil, and continue stirring. Continue adding water to the pears as the moisture evaporates. Do this until pears are soft and spreadable. Once the desired consistency is reached, remove and discard the rosemary and ladle into clean sterilized jars. Let the jars cool and then keep them in the refrigerator for 2-3 weeks.

Thanks for the inspiration, Kristen and Lynette. This is delicious!