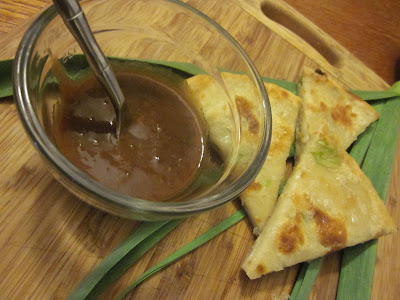 When I was doing research for our Chinese cooking around the world adventure, Belle suggested "onion pancakes." I envisioned a sort of onion latke when I read her email. But after doing some reading, I realized it was, in fact, a flaky dough disc studded with scallions. That was much more palatable since we aren't huge onion fans in this household. I started with this recipe. And it was perfect timing since I just picked up our High Ground CSA box that had some gorgeous spring onions. 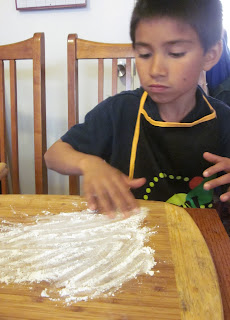 Procedure
Place flour in large mixing bowl and slowly add in the boiling water until it just comes together. Transfer to a floured work surface and knead a few times to form a smooth ball. Place in a bowl, cover with a damp towel, and allow to rest for 30 minutes at room temperature. 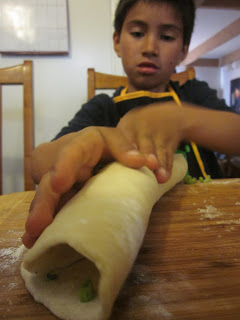 Divide dough into four even pieces and roll each into a smooth ball. Working one ball at a time, roll out into, roughly, an 8-inch disk. Paint a very thin layer of sesame oil over the top and roll into a jelly roll; twist roll into a tight spiral, tucking the end underneath; flatten gently, then re-roll into an 8-inch disk. 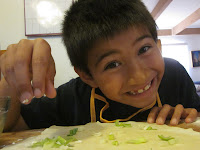 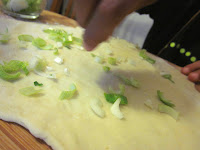 Paint with another layer of sesame oil, sprinkle with 1/2 C spring onions, and roll up like a jelly roll again. Twist into a spiral, flatten gently, and re-roll into a 7-inch disk. Repeat with remaining pancakes. 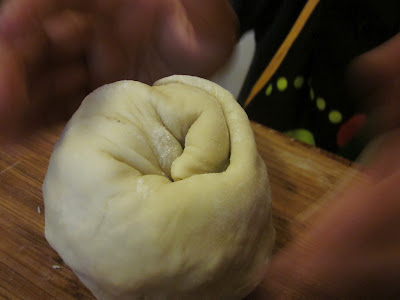 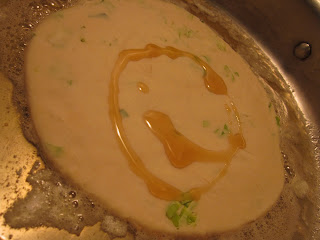 Season with salt, cut into 6 wedges. Repeat with remaining pancakes.

D-, the kitchen elf, was so proud of his onion pancakes. Thanks, Belle, for the suggestion. These were delicious. We served them with a spicy ginger dipping sauce from The Ginger People. 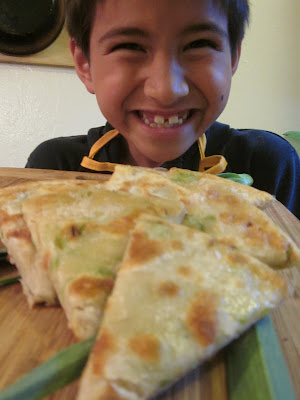