By Camilla M. Mann April 26, 2012
Grapefruits lopped in half are a breakfast table staple in our house. Filipinos soak the segments in vinegar. I know, I know, that sounds beyond bizarre; it's actually very good. Some people sprinkle theirs with sugar. We, usually, devour ours plain in all its juicy, tangy splendor. But I wanted something a little bit more exotic for Jake's birthday and I found a recipe for broiled grapefruit with honey, cardamom, and vanilla. Perfect. 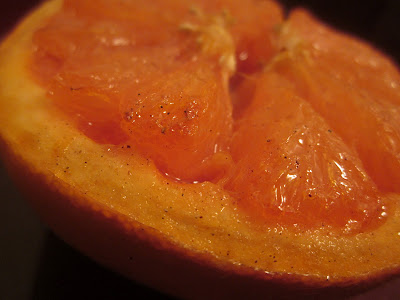 When Riley first took a a bite, he had this look of horror on his face. "Why is the grapefruit hot, Mommy?!?" Then he declared, "Mmmm...cardamom. This is good." While I am still a fan of the slice-and-go method, my experiment was a wild success.


Position an oven rack about 4 inches below the broiler and pre-heat the broiler. This was the first time that I've used our broiler; it told me that it was preheating to 525 degrees.

Set the grapefruit halves in a shallow broiler-safe pan. I used an enameled baking dish.

In a small bowl, stir together the honey and the vanilla extract. Drizzle the honey mixture over the grapefruit halves. Dust each with a bit of cardamom.

Broil until bubbling and lightly browned in spots, 6 to 8 minutes.

Remove from the oven and let cool slightly. Serve warm or at room temperature.