By Camilla M. Mann April 05, 2012
"Food Fest,"a write up on Edible Monterey Bay's blog, pointed us to the hippest place to be on the Monterey Peninsula tonight: the very first Independent Marketplace. So, off we went to Sand City where sandwich-board signs and beaming volunteers direct you to parking lots tucked behind industrial storefronts.

A vibrant mural on a brick wall greeted us. "Welcome to the Westend." 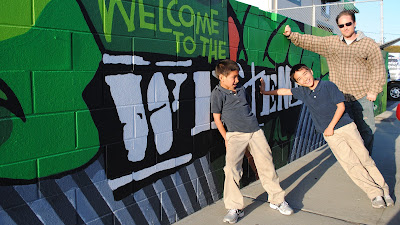 Picture local farmers showcasing their freshest, in-season produce. Sunny lemons, crisp peas, amethyst-tipped baby artichokes, and creamy parsnips. I enviously eyed a bundle of fuzzy, pale green stalks that a man was carrying out on his shoulder. Cardoons by the bushel. This was my kind of market. 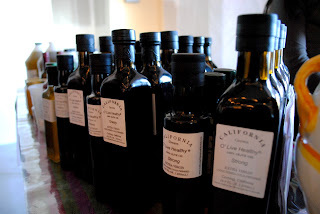 Things to buy. Things to try. Things that make you pause and moan. Yes, literally moan. 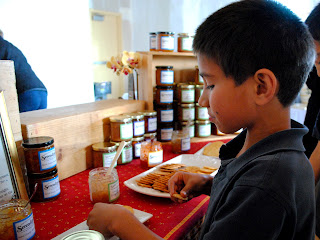 We met Kristen and Lynette Cederquist of Serendipity Saucy Spreads from Santa Cruz. While I was busy trying some honey at one table, my three boys had moved to the Serendipity table. 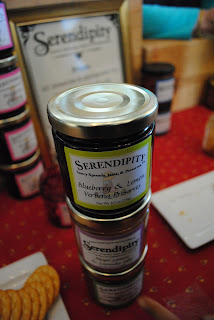 Another "you have to try this" came at my other elbow. Jake was waving a cracker at me that was slathered with a naval orange marmalade. While Riley, my decisive child, just handed me a jar. Have you tried it? I asked. "No," he answered, "I know I'll like it. Please just buy the jar." I read the label - Meyer Lemon & Lavender Jelly. Yep, I'll buy it.

The toughest part was deciding which three jars to buy. We ended up with a Blueberry & Lemon Verbena Preserve, Jake's choice; a Comice Pear & Rosemary Conserve, Dylan's "pear something"; and, of course, a Meyer Lemon & Lavender Jelly. Next time I get to pick...at least one of the jars. 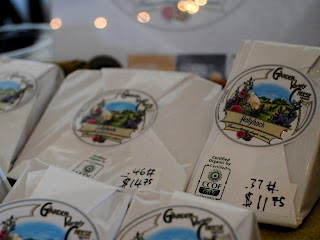 While the boys migrated outside to pick up dinner from the food truck offerings alongside the building, I stopped to chat with Rebecca King of Royal Oaks Artisan Cheese. After sampling the six varieties she was offering, I walked away with a wedge of Monarch, a semi-soft raw cow's milk Trappist style cheese washed with Dread Brown Ale from Santa Cruz Mountain Brewing during its 3 to 6 month aging, and a wedge of Damselfly, her Tomme style cheese that is washed with Syrah from Odonata Winery during its 3 to 6 month aging. And I signed up for her open house that's coming up on May 5th. 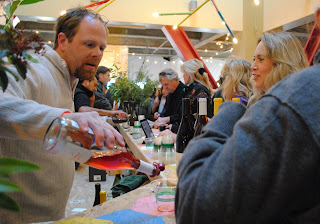 After dining at the indoor picnic tables, amid the crowds mingling, nibbling, and shopping, I swung past the libation offerings and noticed a favorite vintner, Benjamin North Spencer of Leojami wines, pouring his handcrafted, limited release wines. Needless to say, I snagged a bottle of his 2009 Grenache before heading for the door.

The boys had homework to do. Otherwise, I could have stayed there for much longer. I didn't get a chance to browse the art, scarves, and jewelry. Nor was I able to peruse the volumes at the pop-up bookstore for the nonprofit beneficiary of the day, Big Sur's Henry Miller Library. Another time, I muttered to myself as we headed for the door. 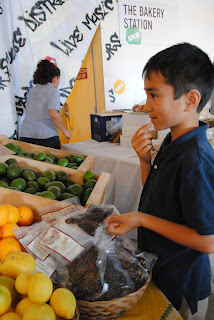 Before we could duck out of the bustling marketplace, Riley spotted some beef jerky, organic grass-fed beef turned into jerky by Old Creek Ranch in Cayucos. The kid loves his jerky. I cannot tell you how many dusty roads we've ventured down because of a handpainted sign with an arrow that announces "jerky this way." Ostrich jerky, turkey jerky, buffalo jerky.

He does read the label before asking me for money. "No nitrites, Mom," he assures me of his purchase, "it's only made with salt, spices, and sugar." I forked over some cash.

We ran into several other families from school and lots of other familiar faces. All of us seemed to be intrigued by the scene of this inaugural mini Eat Real fest meets farmers' market.

We will definitely be back. Next time, my husband whispers as we climb into the car, let's go without the boys. Date night at the Independent marketplace? Oh, yeah, baby!