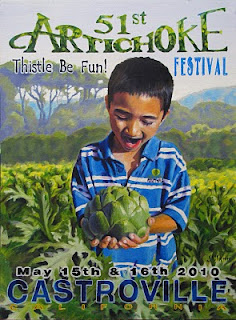 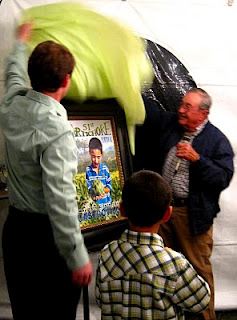 It's not that I ever stopped eating artichokes, but they haven't been at the forefront of my mind for almost two years. And I think it was because 2010, for our family, was "the year of the artichoke." Serious artichoke overload.

In 2009, my husband's painting was selected as the poster for the following year's annual artichoke festival in nearby Castroville.

That launched us into tours of artichoke farms, a grand unveiling at the festival office, the 2010 parade circuit as we rode on the artichoke festival parade float several times in the months leading up to the festival. His painting, and our older son's image, was on t-shirts, posters, mugs, and everywhere else that the artichoke festival logo appeared. The original painting was auctioned off at a fundraising gala for a nice sum. Here we are on the float during the Good Ol' Days parade. 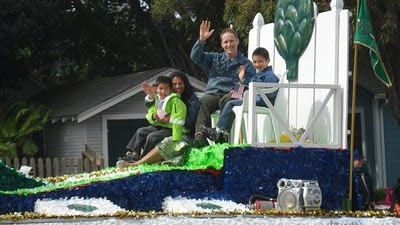 On the creative-front it inspired me - through EcoChic Designs - to create a line of EcoChoke pieces that incorporated recycled glass, gemstones, and sterling silver into earrings, necklaces, and bracelets.

And on the culinary-front, artichokes became an obsession. I put artichokes in everything from salads to lasagna to cakes. Yes, cakes!

This morning, when I saw an email from the Monterey County Weekly, inviting home cooks, farmers and other enthusiasts to submit artichoke recipes for a chance at appearing on a Food Network show, I couldn't resist. I trawled through my old artichoke blog, Thistle Be Fun, that hasn't been seen on my monitor since 2010, and submitted three different recipes. 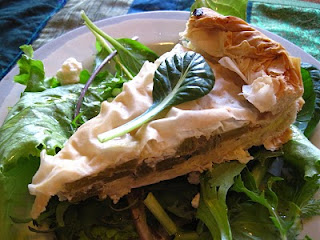 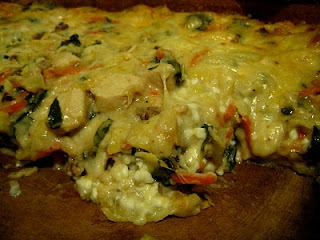 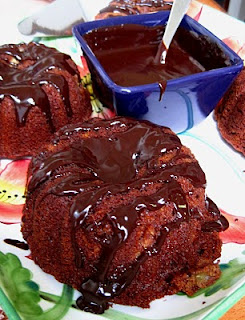 Within minutes of clicking send, I received this back from the Monterey County Weekly: "love it - i'll pass it along. and i'll look at putting together an artichoke piece with some of your recipes...they're too fun not to!"

I'll keep you posted. But this has inspired me to cook some 'chokes. Maybe tonight.