A Trio of Wursts

By Camilla M. Mann January 23, 2011
Not sure that beer and cheese alone would be enough for dinner, Jenn went to Mecca Deli in Marina and picked up several varieties of German sausages, some precooked and some for the grill.  We tried bierwurst, that doesn't actually contain any beer but is usually served with beer; weisswurst, a white sausage made with veal, pork, heavy cream, white pepper, ginger and lemon; and Nürnberger Rostbratwurst with its distinctive marjoram and caraway seed flavoring. I served them with dollops of a German mustard made with apple juice.  Due to the way veal is produced, I typically don't buy or eat it.  But last night was a tasty exception! 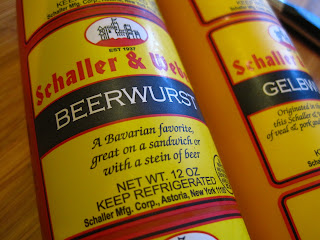