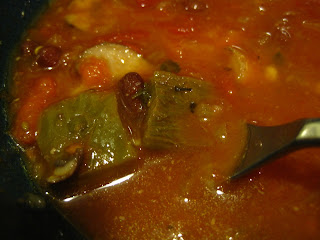 When searching for a recipe in which to use my cactus paddles, I came across Rick Bayless's recipe for Sopa de Hongos y Nopales (Mushroom-Cactus Soup with Roasted Tomatillos), published in From Rick Bayless’s Mexican Kitchen (Scribner, 1996).  The title of this post is accurate; I was inspired by the flavor combinations in his recipe but completely diverged to create my own version.
And the verdict: all three of my boys devoured their bowls.  Jake even said that it was "red book worthy."  I have a red journal into which I've been tucking family favorites for the past ten years.  So, I'll say this was a successful culinary adventure.
Rub three cactus paddles, two red bell peppers, and four tomatoes with olive oil.  Roast in a 350 degree oven till the skin begins to char and pull away from the meat, about an hour.  Let cool and rub off the blackest parts of the skin.  Slice into 1/2" squares.
In a large souppot, brown minced onions, shallots, and garlic in a pat of butter and a splash of olive oil.  Add the sliced cactus, red bell peppers, tomatoes, and 2 C of sliced crimini mushrooms.  Add three crushed tepin chilis, 1 T of dried oregano, and 1 T anise seed.  Pour in 4 C of chicken broth, 1/2 C of beer, 1 can of black beans.  Bring to a boil, reduce heat, and simmer till the soup begins to thicken.
Serve with thick slices of bread.