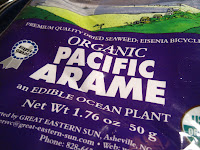 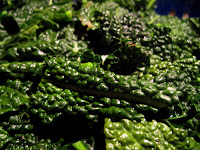 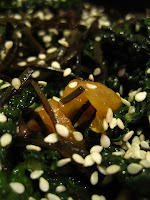 Kale is a leafy green vegetable that belongs to the Brassica family, a group of vegetables including cabbage, collards, and Brussels sprouts that have gained recent widespread attention due to their health-promoting, sulfur-containing phytonutrients.  So, dinosaur kale is good for you and has a cool name.  The name initially helped sell this to the boys who thought they were eating dinosaur skin.  Now that they've had it several times, it's just like spinach; they love it!  This is a tasty - and quick - salad or side dish that we eat quite often.
I buy dried organic arame from WholeFoods, but I'm sure you can find it other places.  Rehydrate according to the package directions.  While the arame is soaking, blanch the kale till bright green and tender.
In a large mixing bowl, stir together minced garlic and ginger, raw honey, and a splash of olive oil.  Add the arame and kale and stir to coat.  Season with soy sauce and sesame oil.  Add diced tomatoes and sprinkle with sesame seeds.