A Hazelnut by Any Other Name Will Taste Just as Good! 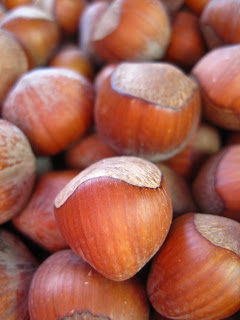 Also at the Marina farmer's market this afternoon: Tony Inzana of Inzana Ranch & Produce out of Hughson.  I have no idea where Hughson is, but given the 209 area code, I'm guessing he and his nuts are from the central valley.


Riley walked up to the booth and, to my horror, stuck both hands into a bin of hazelnuts, rustling the nuts and rolling them in his fingers.  I had flashbacks to my first time at a market in Rome when I realized that you do not select your own produce; you tell the vendor how much you want and he or she selects for you.  Whoops.  Thankfully, the woman realized I was a foreigner and apt to make a major market faux pas.  We later became friendly as I frequented that market on a daily basis while getting groceries for the Nuzzo family.
A quick glance at the man in the apron assured me that he wasn't bothered by Riley's hands in his goods.  So, I smiled at the man, walked over there and started talking to Riley about the nuts.  "These are hazelnuts." 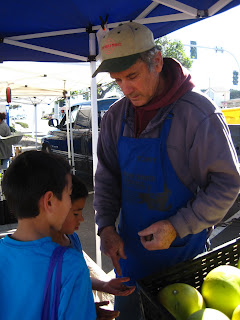 "Mom," Riley interrupted, "the sign says 'Filberts.'"
Same thing.  Sort of.  Turns out both are nuts from the Corylus (kind of like an oak tree) family.  'Hazelnuts' are from the Corylus grown in the north-west United States, while 'Filberts' are typically the nut of the Corylus grown around the Mediterranean.  I suspect that these are really hazelnuts.
Tony seemed pleased at the boys' curiosity and, along with my purchase, gave the boys each a hazelnut, a pecan, an almond, and a walnut...still in the shells.

Pulling out my culinary crystal ball: I see a Torta di Nocciole in my future!