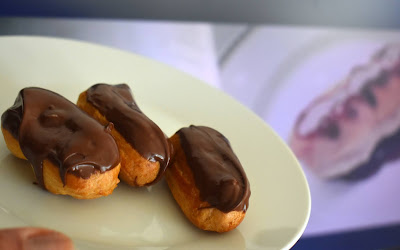 This month the Food'N' Flix crew is watching Simply Irresistible* with Wendy of A Day in the Life on the Farm leading the discussion. You can read her invitation post. And, if you care to join us, it's still early in the month. You have time!

I'll be honest, I have never heard of this film. But I am always game for a movie suggestion from my friend Wendy. Simply Irresistible was released in the late 1990s and has elements of a rom-com as well as foodie mysticism.

Last month, we watched The Holiday and one of the characters introduced the concept of a meet-cute. Well, this movie kicks off with a rather unlikely, yet still endearing, meet-cute. Amanda Shelton (played by Sarah Michelle Gellar) owns The Southern Cross, a restaurant that she inherited from her mother and is trying to keep it alive. She is at the farmers' market and chases a runaway crab up the pant leg of a man who is about to open a high-end restaurant. As I said: meet-cute! 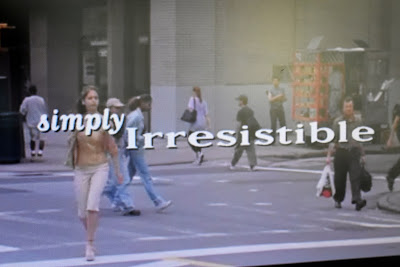 She explains that she owns a restaurant and will be serving crab napoleon for lunch. As luck would have it, Tom Barrett shows up at The Southern Cross with his very unlikeable girlfriend and asks for the crab napoleon.  Now here's where that foodie mysticism comes into play. Amanda is not a very good cook, but one of those crabs she bought at the market is magical. Yes, you read that correctly: a magical crab. The beady-eyed crustacean climbs onto her shelf and casts a spell over her and her cooking. All of a sudden, Amanda becomes an inspired and accomplished cook.

Naturally, Tom's original chef quits just before the restaurant premiere, so he recruits Amanda to cook. This movie harkens back to the classic rom-coms of the 1950. There are no real sex scenes, just a lot of floating on air, magical fog, and swooning...from her Caramel Éclairs. Which leads me to the point of this post... 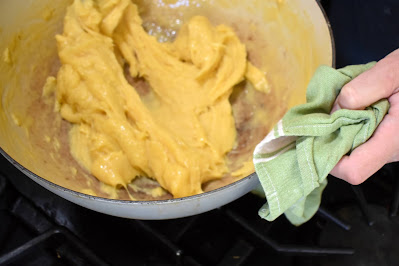 As luck would have it, R had put cream puffs on his list of foods that he wanted to eat during the holidays. Well, we're a little late. And he probably didn't intend that I was going to have him make them himself, but he rolled up his sleeves and made the Pâte à Choux for cream puffs. Then I used half to make my miniature Éclairs. He made a banana buttercream to fill them; then we dipped them in tempered chocolate as a finishing touch. So, most of the photos are of his cream puffs...but it's the same process, just a different shape!
Ingredients makes two dozen
Pâte à Choux
Banana Russian Buttercream
Finishing
Procedure 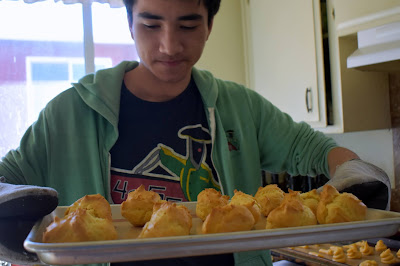 Pâte à Choux
Preheat oven to 425 degrees Fahrenheit.
Bring butter and water to a boil in a large saucepan. Remove pan from heat and add flour all at once. Stir vigorously with a wooden spoon until mixture forms a thick dough and pulls away from sides of pan, approximately 3 minutes. Return pan to heat and cook, stirring constantly, until dough is lightly dried, about 2 minutes more.
Transfer dough to a bowl, and let cool for 5 minutes; using a wooden spoon, beat in 9 eggs, one at a time, making sure each egg is completely incorporated before adding the next. Dough will come together and be thick, shiny, and smooth.
Place the dough in a piping bag with a side, circular tip. On a parchment-lined baking sheet, setting pieces 1 inch apart, pipe out cylinders approximately 2 inches long.
Bake at 425 degrees Fahrenheit until puffed and light brown, approximately 10 minutes. Reduce oven temperature to 350 degrees Fahrenheit , and continue to bake until well browned, approximately 15 minutes. Let cool.
Place the pastry on a wire rack and pierce the top with a sharp knife to let out the steam. While the pastry cools, make your filling.
Banana Russian Buttercream
Place the condensed milk in a mixing bowl and beat until lightened and fluffy. Beat in 1/2 a cup of butter at a time until the buttercream is stiff and holds its shape. Beat in the bananas. Place buttercream in a piping bag. 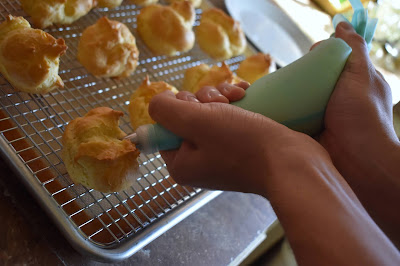 Finishing
Pipe the buttercream into the hole that that you pierced to let out the steam, making sure that you don't have too much coming out of the pastry. If you have excess filling, gently wipe the pastry as clean as you can. 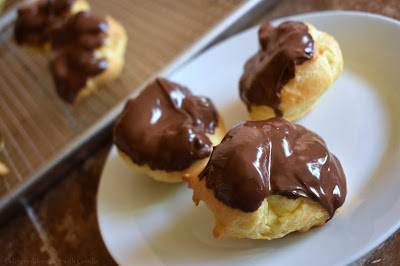 Dip the pastries in the tempered chocolate, covering up the filling hole. Let chocolate set before serving. 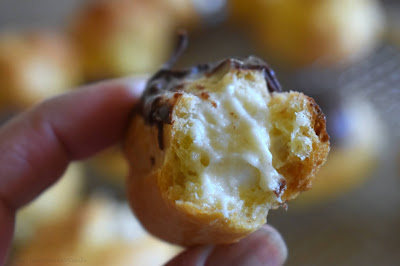 Well, that's a wrap for my Simply Irresistible offering. You have plenty of time to join in the fun and games. So, watch the movie and get inspired into the kitchen. Or, next month, I am hosting Spirited Away; interestingly enough, it's one that my kids watched and said, "Mom, you have to do this for your food movie group." Done. Stay tuned!
*This blog currently has a partnership with Amazon.com in their affiliate program, which gives me a small percentage of sales if you buy a product through a link on my blog. It doesn't cost you anything more. If you are uncomfortable with this, feel free to go directly to Amazon.com and search for the item of your choice.