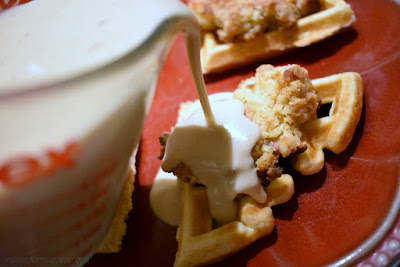 This week, Sneha of Sneha's Recipes is hosting our Sunday Funday group with waffles as our theme. Here's the inspired waffle line-up... 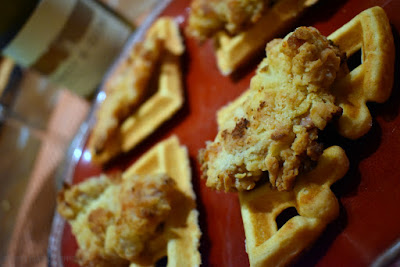 Chicken and waffles is one of my younger son's favorite meals. When he makes meal requests, this is usually it. When he finished a summer school math class - and got 100% on his final! - I made Panko-Crusted Chicken & Shichimi Togarashi Waffles with Kabocha Fries. Okay, he did object to the pumpkin fries on this version. But you can go to that recipe post for my waffles and gravy recipes. 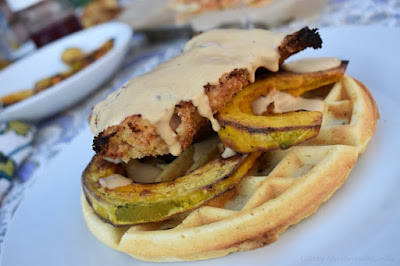 They also object when I use the waffle iron for things other than "regular" waffles. I once pressed polenta rounds in the waffle maker and called them waffles. Nope. I used mashed potatoes to make waffles and topped it with bacon and bleu cheese. Nope. How did I raise picky eaters?! Well, I guess they aren't picky; they are just particular...and rather vocal about their thoughts. Ha. 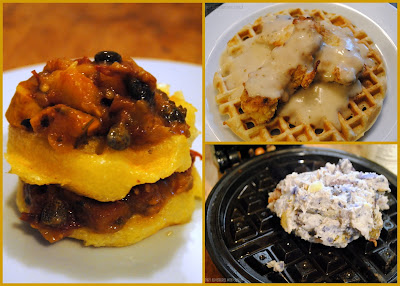 This post is just be a recipe for the oven-baked chicken as I used a waffle mix from Bob's Red Mill for the actual waffles. I also used the mix in the breading for the chicken.
Also, for an entree size dish, you could serve a whole waffle with two tenderloins on top. As this was just part of a larger menu, I opted to serve one-quarter of a waffle with half of a tenderloin!
Ingredients 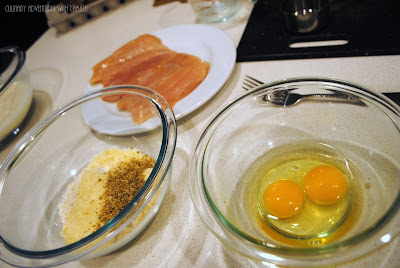 Procedure
Preheat oven to 450 degrees Fahrenheit. In a medium size bowl mix together waffle mix and oregano. In a smaller bowl, whisk the eggs. Line a baking sheet with parchment paper.
Dip chicken into eggs then toss in flour mixture. Place it on the prepared baking sheet. Repeat for the remaining tenderloins. Drizzle melted butter over the chicken (approximately  ½ teaspoon each).
Bake for 10 minutes. Flip chicken and bake for an additional 8 minutes or until chicken is firm to the touch and no longer pink in the center.

To serve, place one-quarter of a waffle on your serving plate. Top with chicken piece. Drizzle with gravy. Serve immediately.
That's a wrap for this #SundayFunday event. We'll be back next week as Stacy of Food Lust People Love leads the discussion of One Pot Wonders. I love anything with less clean-up in the kitchen. Stay tuned...