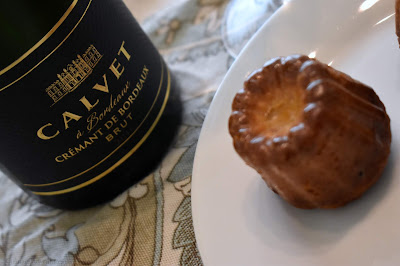 This month the French Winophiles are exploring Crémant de Bordeaux with Pinny Tam of Chinese Food and Wine Pairings. You can read her invitation here. Actually, she ended up broadening the topic to any Crémant since some were finding it difficult to source Crémant de Bordeaux specifically.

If you are reading this early enough, feel free to join a live Twitter chat on Saturday, March 21st at 8am Pacific time. You can follow along with the hashtag #Winophiles. And if you decide to chime in, be sure to use that tag so we can see it. In the meantime, here are our posts; they will go live between Friday, March 20th and early Saturday morning, March 21st... 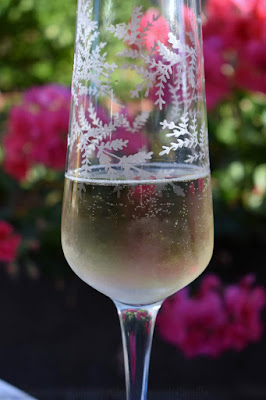 Crémants are sparkling wines made using the same method used for Champagne where the second fermentation takes place in the bottle, but are made outside of the Champagne region. Grape varieties vary, depending on area.

Sparkling wines have been produced in Bordeaux for well over a century despite the appellation only becoming official in the Spring of 1990. But, even after three decades, the specific style of Crémant de Bordeaux wines is not as clear as that of other French Crémants appellations, such as Crémant de Loire , Crémant de Bourgogne, and Crémant d'Alsace. That is likely due to Bordeaux being more well-known for its red wines. So, the Crémants of Bordeaux are made from both red and white grape varietals, including Cabernet Franc, Cabernet Sauvignon, Carmenère, Malbec, Merlot and Petit Verdot on the red side and Sauvignon Blanc, Semillon, and Muscadelle on the white.

I got my hands on a bottle of Calvet Crémant de Bordeaux Brut 2016. It was described as "sophistication without the Champagne price tag." And at less than $20, it certainly fit the bill.

The wine poured a beautiful straw color with persistent bubbles. On the nose, I got some ripe fruit with hints of brioche. On the palate it was smooth and crisp. I knew it would be a perfect pour for a special pastry. 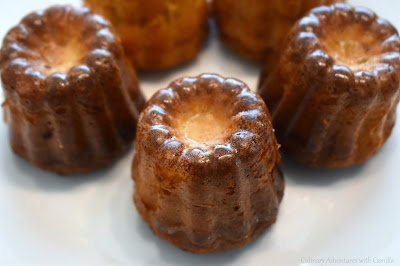 Cannelés have long been a family favorite. Whenever we go to our favorite French bakery, the boys order these custardy treasures. And, it turns out, that these are a specialty of Bordeaux. Perfect!

I've long been intimidated by them because I thought I needed the copper molds (about $30 each!) and beeswax. Yada yada. It seemed so complicated...and not worth the effort when I could just spend $3 and have someone else make them for me.

But, when I was talking to R's French teacher - who is an incredible baker - about them, she offered to lend me her silicone molds while she was in Europe one summer. And she even sent me a recipe. The recipe was in French; she told me that R could translate. I assured her that though my French was extremely rusty, I could manage. I also compared a few other recipes and incorporated them into what has become my version. 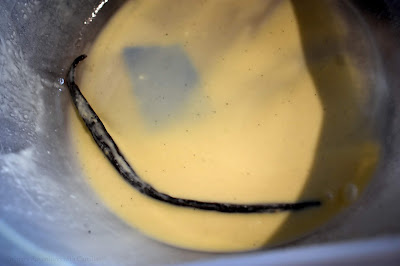 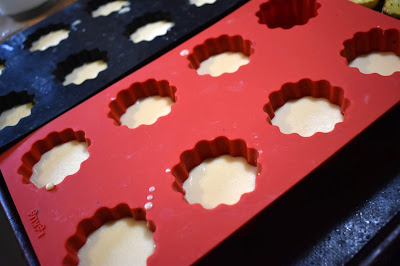 Batter
Place the milk, butter, vanilla seeds and pod in a small saucepan and bring to the boil. Remove the pan from the heat and let it cool for a few minutes. Take out, but save, the vanilla pod!

Place the eggs and egg yolks into a separate bowl and beat lightly. In another mixing bowl, place the flour, powdered sugar, and salt into a large mixing bowl. Add in the beaten eggs. Pour in the milk mixture.

Whisk everything together until you have a smooth batter. You can strain the batter through a sieve to remove lumps, if you wish. I didn't do this. Stir in the Calvados and add the vanilla pod back to the bowl. Cover the bowl and leave in the fridge to rest. Different recipes say to rest the batter from 12 hours to 2 days. I usually prepare my batter overnight, so mine rest for about 9 hours.

To Bake
Remove the batter from the fridge and give a gentle whisk. Preheat oven to 475°F. Place the molds on a baking tray and place - empty - in the oven for 5 minutes to heat them. Once heated, pour the batter into the molds, leaving a 1 cm gap to the top. Bake for 15 minutes, then reduce the heat to 375°F and bake for another 60 minutes. 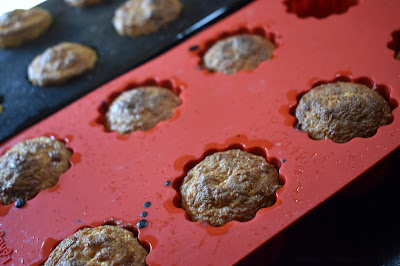 Invert the molds and remove the cakes. Leave them to cool on a wire rack...or devour immediately as my trio usually does! 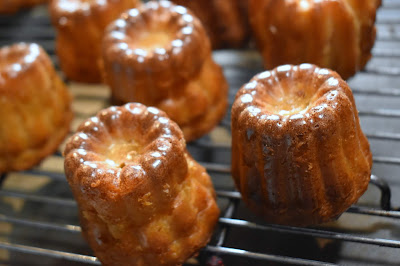 Well, that's a wrap for the March #Winophiles. We'll be back in April, looking at wines from the Northern Rhône with Rupal, the Syrah Queen, at the lead. Stay tuned for her invitation.