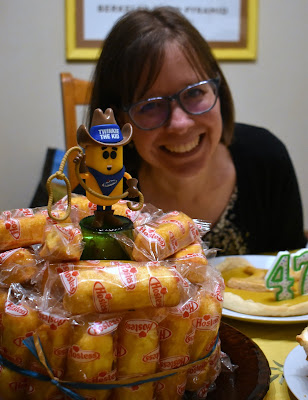 A decade ago - Wow! Yes, it really was in 2010 - a friend requested homemade Twinkies for this birthday. I made a disastrous version with whole wheat flour; you can read about my first Homemade Twinkies. 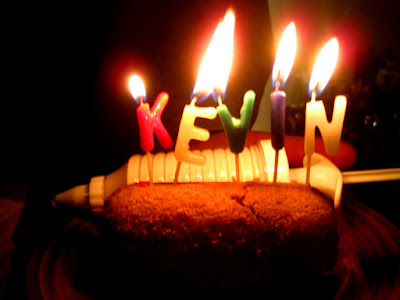 The next year, I followed that up with Twinkie Fail II. Then said friend admitted that he had been joking all along about Twinkies being his favorite...and I was spared from every having to try to make them again!

Fast forward to 2020. I had a text exchange with a mutual friend who was invited to our small celebration for Jenn's 47th birthday. The exchange went something like this...

B: From Mike. We should make Jenn a Twinkie bday cake.
C: Why?
B: He said cuz the zombies are coming and Twinkies last forever. Haha just stack 'em 47 high.
C: We nixed the virus theme, remember?
B: True, but the zombies coming is different.
C: Not really.
B: We could have a prepper birthday party. We all get a gallon of water and a gallon of wine.
C: Homemade Twinkies don't count, I'm guessing.
B: Do you remember that disaster?
C: Sadly, yes. I can't believe I'm actually looking at Twinkies on Amazon.
B: YES!
[moments later]
C: Fine. 60 Twinkies on the way... 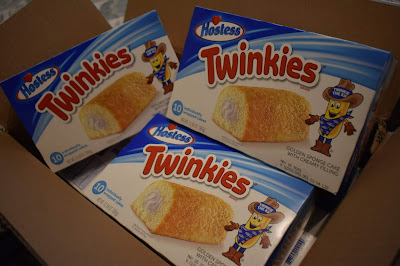 And so they arrived. The boys were simultaneously intrigued and horrified. They asked to try one. Fine. I have sixty and only need forty-seven. "You really only need forty-six, Mom, right? Because you also ordered that plastic Twinkie the Kid toy!" Yes, you're right. 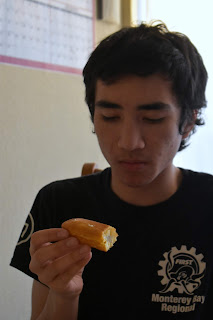 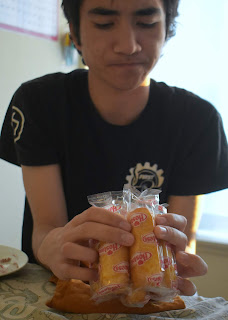 R tasted, then tried to mathematically decide how to best construct a cake out of them. "Are you unwrapping them?" Definitely not! 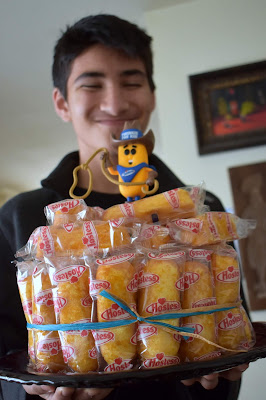 In the end, it was D who helped me make this birthday Twinkie creation. Thirty-six still wrapped Twinkies tied in four concentric circles with the ten remaining stacked on top. And that plastic toy made it forty-seven.

After I "served" this, Jenn was in disbelief that it was her husband who had suggested it. We both thought that Brian was making it up...just to harass me. So, Jenn grabbed Mike phone and found the stream. He really had suggested it. Well...it's done! And it was mercifully simple. One click on amazon, delivered to my doorstep, and a somewhat Enthusiastic Kitchen Elf who did the creation.