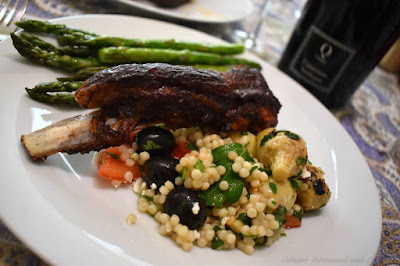 Today Jill of L'Ocassion invited the Italian Food Wine Travel bloggers to focus on the wines of Italian islands. You can read her invitation and join in the conversation if you're seeing this early enough. We gather on Twitter on Saturday, April 6th at 8am Pacific time to share our thoughts and pairings. Or just check out the hashtag - #ItalianFWT - at your convenience.

Here are the Italian Island Offerings

Memories of Italian Islands
While visiting the great cities in Italy probably tops many people's lists - yes, I was more than a little of envious of my son's recent trip to Italy and Greece during his Spring Break last month! - it's the surrounding islands that are seared into my dreams.


You'll have to forgive the lack of crispness in these photos. That's what happens when you take a photo of a print. I'll scan these slides and make them digital one of these days. For now, you get the idea...

During the year that I lived in Rome after college, I traveled when I wasn't working. I hopped across the islands in the Venetian lagoon and spent my twenty-fourth birthday weekend camping above a beach on Costa Smeralda, Sardegna with one of the other au pairs.


During Spring Break of 1997, I traveled to Venice on my own and stayed for a few days in the convent on Giudecca. My husband was intrigued by the photographs I took during my stay in the Venetian lagoon and created these paintings of Torcello (left) and Giudecca (right). 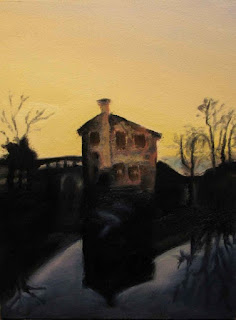 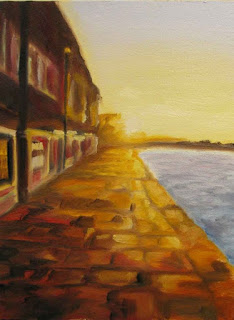 But it's the slightly longer trips that have me longing for those sun-kissed islands that smelled of citrus, salt, and cypress trees.

For no other reason than that I could, I boarded an overnight train from Termini (Roma) and took it all the way to Milazzo, Sicily where I hopped on the ferry around the Aeolian islands. I had read about Vulcano, and planned to get off the boat there; but, honestly, it reeked of sulphur, so I stayed on the ferry until we circled Lìpari, the largest in a chain of islands in a volcanic archipelago situated in between Vesuvius and Etna. I rented a cottage on a family's farm in Lìpari and was able to see them putting up a tomato harvest for the year. Truly amazing. You can read about that in my Under a Full Moon on Lìpari + Passata di Pomodoro post.

Then, a few years later, I returned to Sicily with my husband and some friends and family. We stayed in Palermo for a couple of days and, then, we were stranded on Ustica, an island off the northwest coast, for a week. I write 'stranded' because we had only planned to be there for two days; but storms came in and no boats were returning to Palermo. That was one of my favorite travel delays. We had rented a house from a man named Antonio who left us fresh herbs and fresh eggs during our stay. Before Ustica, I had never seen capers growing in the wild.

Now capers are something I always have on hand. They add a nice pop of saltiness to salsas and salads. And I will never forget how Antonio gave me a jar of home-cured capers to take with me. "Per te," he said. "Prendilo a California." For you. Take it to California. I may or may not have slapped a commercial label on the jar and brought them back to California with me. Maybe that happened...I'm not really saying.

I searched and searched to see if I could find a way to get my hands on the only wine I found from Ustica: Hibiscus. Still trying! But, until then, I was able to get a few bottles of Cannonau Di Sardegna. 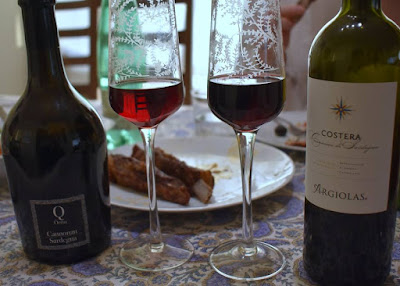 Cannonau is the Sardinian name for Grenache. As a wine-producing region, Sardinia has languished in relative obscurity for years. But it’s coming into its own. I tracked down two different bottles , but am focusing this post on the one that we thought paired best with the meal. The other bottle was fine, too, but it was a little bit more tannic and not as friendly with the lamb. 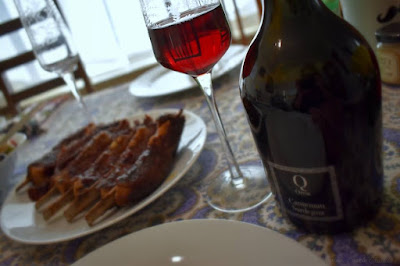 Piero Cella, who started his tiny Quartomoro label as a side job, is part of that renaissance. An enologist, he has worked all over Sardinia, documenting soil types and grape varieties. He sources grapes from different growers in the regions and they work together on how to grow the grapes organically and how to express the terroir of the grapes and the growers' vision of the resulting wine. Cella dreams of employing classic continental winemaking methods without losing characteristics of its local origins. 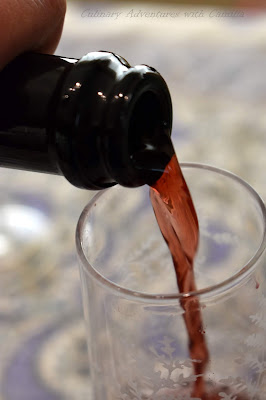 The 2016 Quartomoro Cannonau Di Sardegna 'Orriu' is an example of Cella's dream. The wine is classically Sardinian, lacking the over-ripe flavors common in Cannoanu. The wine is crisp, clean, rife with fruit and layers of complexity. On the nose, I got an intriguing blend of subtle flowers, Asian spices, and black fruits. On the tongue, the wine is well-structured and balanced with notes of pine, herbs, and berries. The finish circles back with some delicious spice. 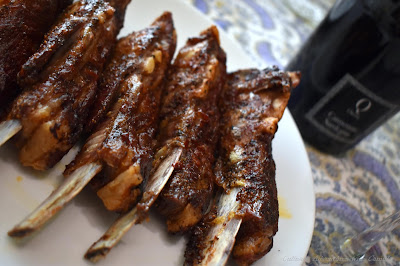 And though Sardinia is an island, much of their traditional foods are not seafood! It's somewhat of a contradiction - an island civilization that did not utilize seafood in its diet - but it makes sense. Since Sardinia’s coast has always been prone to invasion, the Sardinian people found refuge in the mountains. Therefore, the traditional foods of Sardinia were always more influenced by the land than the sea. Today, however, with fear of invaders and pirates gone, Sardinians have embraced seafood and enjoy many seafood dishes, including seafood fregola with saffron, spaghetti with sea urchin, bottarga, and octopus salad.

However, based on their traditional mountain cuisines, I opted to make lamb. And I served it with Israeli couscous to simulate Sardinian fregola sarda.


Procedure
Mix together the garlic, red wine, lemon juice, honey, olive oil, cinnamon, oregano, rosemary, salt, and pepper to form a marinade. Place the ribs in a rimmed dish and pour the marinade over the top. Let marinate overnight, if possible, turning the ribs halfway through. When you are ready to cook, remove the ribs from the fridge and let come to room temperature.

Preheat the oven to 225 degrees Fahrenheit. Remove the ribs from the marinade and place fat-side up on the rack over a roasting pan. Roast for 3 to 4 hours, until the fat has rendered and browned and the meat is well done. Because they are on a rack, I didn't turn them at all. 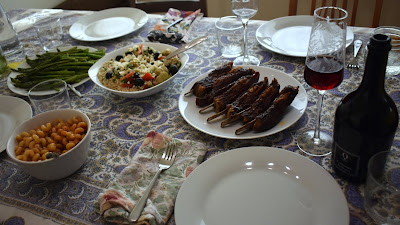 Serve with roasted asparagus, a green salad, and fregola sarda, if you can find it. Israeli couscous was a decent substitute. 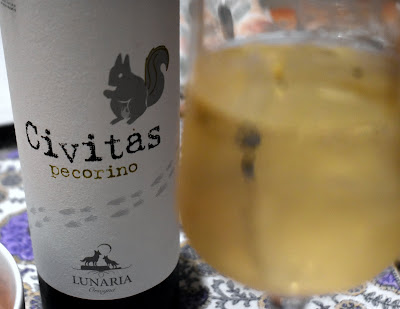 Next Month
Looking ahead, we head to the Marche with Lynn of Savor the Harvest as she leads the discussion on the Pecorino grape. I had always thought that referred - only - to cheese! I'm looking forward to learning more from this group. Cin cin.