Food as Art + My Foodie Crush on Chef Cal #FoodNFlix 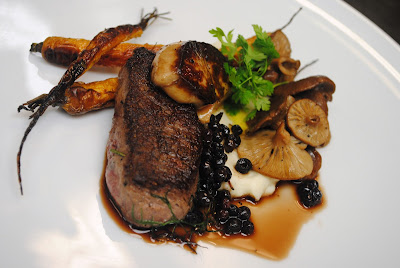 This month, I invited my fellow Food'N'Flixers to watch Spinning Plates*. You can read my invitation here.

On the Screen
Spinning Plates looks at three very different restaurants: Michelin-rated Alinea in Chicago with Chef Grant Achatz at the help; Breitbach's Country Dining in Balltown, Iowa that's been operated by the Breitbachs for over a century and a half; and La Cocina de Gabby in Arizona that is newly opened and floundering.

Alinea, helmed by Achatz, "exists to entertain...to guide you through an experience." And food there is a mixture of art, craft, and science with Achatz being at the forefront of molecular gastronomy. He offers a 25-course tasting menu with items that might take a handful of people more than half a day to make. During the film you see him scorching oak leaves and creating an elaborate dessert setting with multiple sauces and a meringue that might have been frozen with nitro instead of baked. It was hard to tell.

Breitbach's is a gathering place at the heart of the community. In fact they mention that six or seven people have keys to the place and open up, turn on the lights, and make coffee until the cooks get there. They serve good ol' home cooking from fried chicken to homemade pies.

Francisco Martinez opened Gabby's because his wife, who does all of the cooking, "cooks like an angel." For the Martinez family, the restaurant is how they pay their bills and their entire life. They have no employees; it's all family-run with Gabby's mom and sister pitching in. Martinez laments that his daughter is there all the time, that he doesn't have money to put her in preschool to interact and learn from other children. On the screen we see traditional beans and rice, tacos, tamales, and more.

Though the establishments are more different than alike, the director tries to bridge the gap in the stories, showing how the restaurateurs share similar philosophies. Each owner is passionate about his restaurant, and each mentions the grueling schedule. It's clear that owning a restaurant is less a vocation and more a way of life.

The month is still young. If you are inclined to watch Spinning Plates and are inspired to head into the kitchen, please join us at at Food'N'Flix. Who knows? I might just ring in again with some fried chicken or homemade tamales. We'll see how the weeks go. 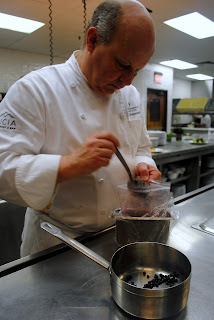 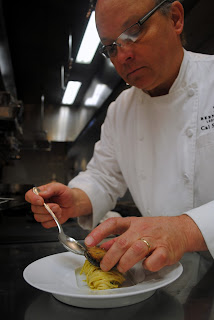 On My Plate
Several years ago, I spent an incredible Saturday morning with Chef Cal Stamenov at Bernardus Lodge in Carmel Valley when I interviewed him for a Local Heroes story for Edible Monterey Bay. He had just received the honor of 'Best Chef' and Lucia 'Best Restaurant.' 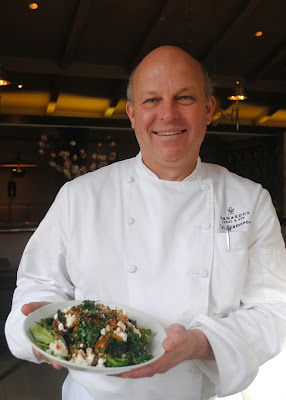 The story came out in the Spring 2016 issue. Read it: in the digital version. 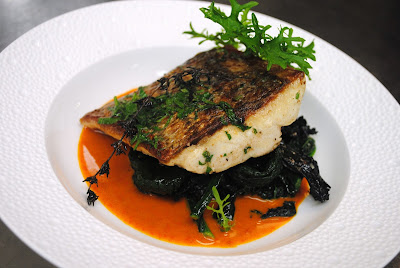 I decided that, like Achatz, Chef Cal is an artist in the kitchen. I wanted to share my most memorable dining experiences ever...and my foodie crush on this talented cook. And here are some of the photos I took that didn't make it into the publication. 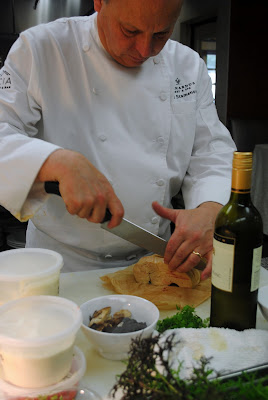 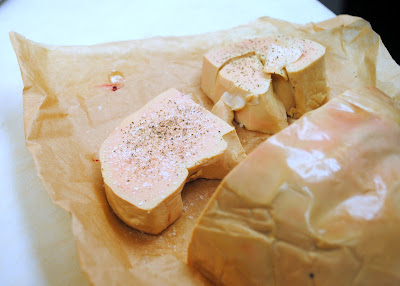 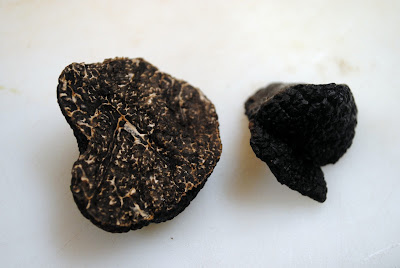 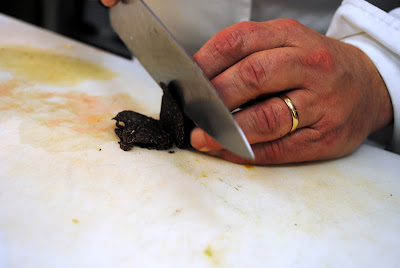 I eagerly accepted Chef Cal’s generous invitation to return to Lucia for dinner. So, Jake and I dropped the boys off at my parents and we headed out to Carmel Valley for a dinner that - without hyperbole - is one of the best meals I've ever had.

Lucia tops my list. And, admittedly, I have a little foodie crush on Chef Cal now. 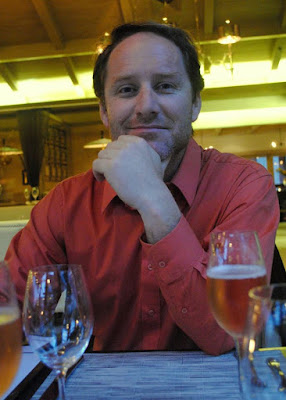 Though the entire menu was appealing, Jake and I opted to indulge in the Chef’s Tasting Menu with wine pairings. 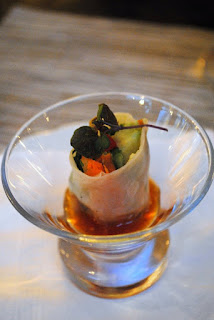 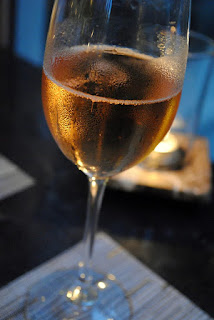 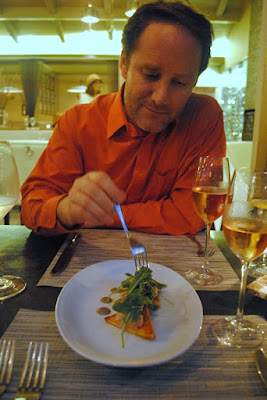 Next was a dish Stamenov had shown me earlier that day: Monterey Bay Red Abalone. Housemade spaghetti was swirled with pancetta and a soft egg to form a tight nest on which the abalone rested. 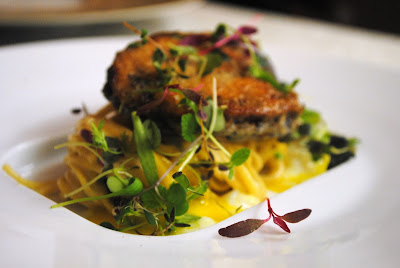 The wine that Jung selected - Château Crémade Rhône Blend, Provence 2008 – was a surprising delight. Vastly preferring red wines to white, I didn’t expect this Chenin Blanc to captivate me. But it was simultaneously creamy and floral, like a fine cheese. 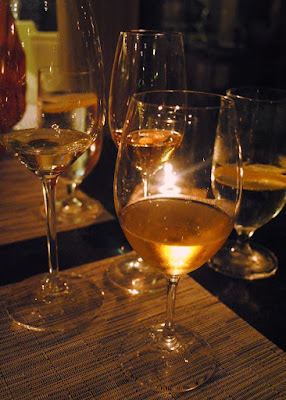 The Colorado Lamb was paired with Madeleine’s Rue de Champs Cabernet Franc made by Damien Georis. Jake had ordered the venison and we passed the plates between ourselves. I think we had stopped talking at that point, lost in our own appreciation for the food in front of us.

The dessert course was a Meyer Lemon Soufflé Tart with Candied Buddha’s Hand Citron and Honey Ginger Ice Cream. I know Stamenov has a Buddha’s Hand Citron tree and surmised that those delicate ribbons were from his orchard. Accompanying the dessert was Bernardus’ Late Harvest Sauvignon Blanc 2009, a veritable dessert on its own.

True to his authentic generosity, and probably remembering that I admitted I much preferred a cheese course to dessert, Stamenov lavished us with additional courses, including a cheese course. We tried the Despearado, a raw cow’s milk cheese, from Cato Corner Farm in Connecticut. It has both a custard-like outside with a slightly chalky center. The rind is washed with fermented pear mash and pear eau de vie from Westford Hill Distillery.

They even sent us home with homemade truffles, artisan caramels, and sugar-crusted shortbread. 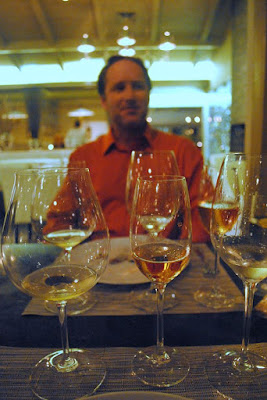 Without question, it was the one of the most sumptuous meals I’ve ever had. I may never make it to Chicago to eat at Alinea but I can rest assured that I have experienced food as art at Lucia.

Is it pretentious to quote your own article?!? Well, I'm going to do it anyway. "Stamenov’s a pure artist. Generous mentor. Hero."