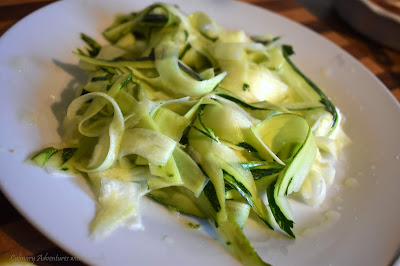 Here we are at the first August post for our year-long #KitchenMatrixCookingProject; you can read more about that project here. Wendy of A Day in the Life on the Farm selected our recipes this month and she has an amazing line-up for summer produce planned. This week, we're focusing on zucchini. Here's what the others whipped up. If you don't have a copy of Bittman's cookbook, his zucchini matrix is online. He offers a dozen different preparations including barbequed zucchini, curried zucchini, and zucchini dip. I decided to try two of the three raw zucchini recipes.

Zucchini Carpaccio. Typically carpaccio is made from meat or fish. I've made Carpaccio di Tonno myself and ordered many beef versions in restaurants. But this is the first time I've made a zucchini version!

From the two accounts I can find for the name, carpaccio, both reference a painting. Venetians claim that carpaccio was invented at Harry's Bar when, in the 1950s, a countess was told that she should only eat raw meat. The owner, Cipriani, named the dish - raw, sliced beef with a mustard sauce - after painter Vittorio Carpaccio whose paintings often used those colors.

The other Italian city to lay claim to the invention of carpaccio is Milan. A similar tale, involves a weathly woman who was prescribed a diet of raw meat. But since it was not socially acceptable for a woman of her stature to order raw meat, the owner suggested she use a code word. When she asked, "what word should we use?" she was sitting beneath a Carpaccio painting. That was it. However it was actually named, this dish was pretty as a painting.


Procedure
Using a vegetable peeler, slice the zucchini into ribbons and spread them out on a platter. Sprinkle with salt and pepper. Drizzle with olive oil and lemon juice. Let stand for at least 10 minutes for the dressing to soften the ribbons. Serve immediately.