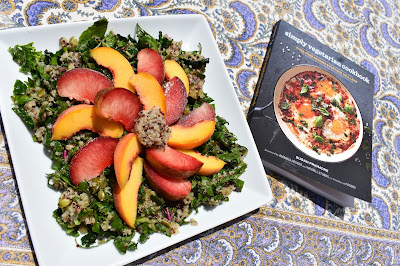 One of the great things about being part of the food blogging world: Every once in awhile, a blogger that I know and love publishes a cookbook. That's the case for Susan of The Wimpy Vegetarian.

Susan and I have posted in #SundaySupper together as well as #BreadBakers and #SRC (Secret Recipe Club) when that was still active. So, when I saw that she was writing a cookbook, I offered to test some recipes for her. She didn't end up needing my help, but I immediately ordered a copy of her book - The Simply Vegetarian Cookbook: Fuss-Free Recipes Everyone Will Love by Susan Pridmore* - as soon as I was able. It was released at the end of July, so you can order it and get a copy for yourself. 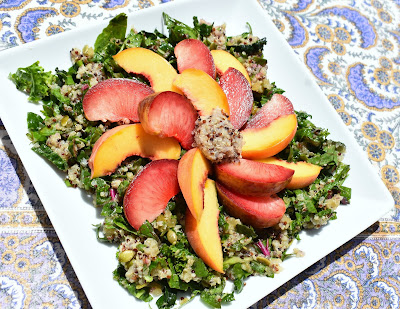 The subtitle to Susan's cookbook is "Fuss-Free Recipes Everyone Will Love." She's too modest to do so, but she could have claimed "Fuss-Free and Fabulous Recipes...".

I found the organization of the book appealing in its simplicity - there are eight chapters, including 'no cook', 'thirty minutes max', 'one pot & skillet', 'sheet pan & baking dish', and 'kitchen staples.' I skipped over the slow cooker section because, well, I don't have one. But she does give conversions for slow cooker recipes to the stove top as well as pressure cooker to stove top. I did't try the adaptations, but I will.

But there were more than a dozen recipes that called me to the kitchen just in reading them. I have long read about mason jar salads, and been tempted to try them, but never got around to it. I decided to jump in with her Mason Jar Edamame Salad, from her 'no cook' section. Another that I have marked to try is her White Bean Wrap with Jalapeno-Apple Slaw.

The 'Thirty Minutes Max' looked great, but several recipes use chickpeas - Chickpea Nicoise Salad, Spicy Chickpea Gyros, and Smashed Chickpea and Kalamata Pasta - and one of my sons is sensitive to them. I know I could just swap out for a different bean, but I wanted to stay mostly true to Susan's creations.

In addition to being fuss-free and fabulous, her recipes are also flexible. At the end of her introduction, Susan writes, "There are enough things to be stressed about in life. Dinner shouldn't be one of them" (pg. xiii.). I agree!

So, I headed into the kitchen and used what I had, adapting her Quinoa and Nectarine Slaw to a Stone Fruit Quinoa Slaw as I had just picked up peaches and pluots at the farmers' market. I also used the braising greens I had in my crisper and added in some candied ginger for a bit more sweetness. And I skipped the feta - not because I'm dairy-free or vegan - but because I didn't have any. It worked!

But, my biggest compliment to a cookbook author is: It got me off the couch and into the kitchen! It inspired me to actually cook.

Seriously. I have so many beautiful, even well-written cookbooks, but if they don't inspire me into the kitchen, I just can't rave about them. This book has clearly written recipes, a few beautiful photos of completed dishes, and lots and lots of tips about adding more vegetable-based meals to your table. It's not a cookbook for vegetarians alone. It's a cookbook for everyone who is interested in some fuss-free, fabulous ways to get more vegetable on their plates. 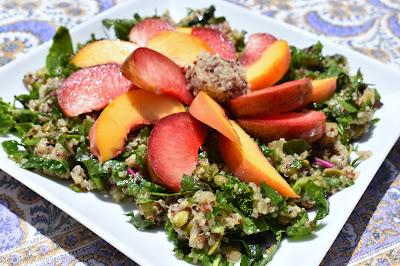 
Procedure
Lemon Vinaigrette
In a small mixing bowl, whisk together the lemon juice, mustard, salt, and pepper. Slowly drizzle in the olive oil and whisk until combined.

Salad
In a large mixing bowl, combine the quinoa, greens, pumpkin seeds and ginger. Toss with vinaigrette until well-coated. Turn slaw onto a serving platter and arrange stone fruit on top. Serve immediately.